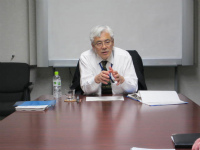 The Fourth Tokyo International Conference on African Development (TICAD IV) was held in Yokohama in 2008, and a Ministerial Follow-up Meeting has been held every year since 2009. This year, Foreign Minister Takeaki Matsumoto attended the Third Ministerial Follow-up Meeting which was held in Dakar, Republic of Senegal, on May 1 and 2. Prior to this occasion, FPCJ held a briefing, inviting Mr. Sumio Kusaka, Director-General for Sub-Saharan African Affairs of the Ministry of Foreign Affairs.

Ambassador Kusaka shared the TICAD Follow-up Mechanism and details of the up-coming Third Follow-up Meeting including its major issues.