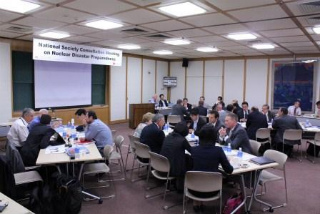 17 May 2012, Tokyo/Geneva — The Fukushima nuclear accident has shown that people cannot depend entirely on governments and the nuclear industry to ensure their safety, the Red Cross Red Crescent said as it set out plans to step up its work on nuclear disaster preparedness worldwide.

“People need to have more information and be better prepared in case the unthinkable happens and the Red Cross Red Crescent has a vital role to play,” said Tadateru Konoe, President of the Japanese Red Cross and of the International Federation of Red Cross and Red Crescent Societies. “They cannot rely solely on governments and on the nuclear industry, which has a vested interest in telling them that everything is safe and nothing can go wrong. It has and it could again, anywhere and at any time.”

After a consultation meeting in Tokyo, the humanitarian organisation, which is the world’s largest, grouping 187 national societies said it would move to set up a resource centre offering specialist advice on nuclear disaster preparedness, along with chemical and biological hazards.

It will look at how national Red Cross and Red Crescent societies can be active in helping to protect communities, by raising awareness, helping to manage evacuation if needed and providing psychosocial support and health monitoring in the event of a nuclear disaster.

“We are putting into action our commitment to extend that our well known and respected disaster preparedness work into the nuclear disaster sphere and to tap into our extensive experience from operations like Chernobyl and Three Mile Island,” said Matthias Schmale, IFRC Undersecretary General.

In the operation following the 1986 Chernobyl nuclear accident, the Red Cross Red Crescent has for example reached more than 1.6 million people with health and psychosocial services, while the 1979 nuclear accident in the United States triggered a long-term engagement with nuclear preparedness issues.

Japan is regarded as one of the most disaster-prepared nations in the world, with even small children well drilled in what to do in the event of an earthquake or tsunami. This helped to save many lives, even though 20,000 were dead or missing after a 9-magnitude earthquake triggered a massive tsunami on March 11, last year.

More than 78,000 people were evacuated from around the Fukushima nuclear plant after the earthquake and tsunami triggered cooling failures and a series of explosions propelled radioactive particles over a wide area surrounding the plant.

Local residents say they received little or no information on nuclear safety before the accident and there has been widespread unhappiness with the way in which the public was kept informed after it.