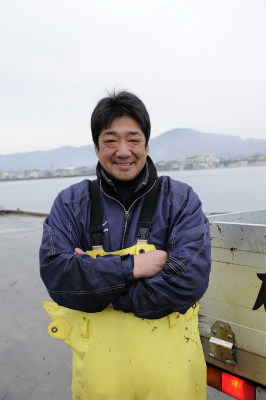 When the Tsunami washed away Takehiko Nanbu’s boat, his seaweed processing factory and his house, the 46-year-old father of three thought his life was finished.

“I couldn’t imagine how I could carry on, having to get a new job and make a living, because even before the disaster I had loans to repay.”

For a year he led a frugal life in his home town of Ishinomaki, relying on the income of his wife, who managed to find a part time job. It was only in the spring of 2012, with the encouragement of his colleagues and news that he could receive government financial support – he decided to return to the ocean.

In the autumn, Takehiko was finally able to restart harvesting seaweed thanks to funding channeled by the Red Cross which enabled him to buy fresh seeds. The funds were derived from the proceeds of the sale of a tanker of crude oil, totaling 40 billion yen, (390 million CHF), donated to the Japanese Red Cross by the Kuwaiti government.

Seaweed cultivation starts in the summer with the laying of nets in the water on which the tiny seeds are planted. Within about two months, the seaweed can be harvested. The Harvest season is from October to April, when harvesters set out on the ocean early in the morning when it is still dark to scrape the seaweed from the nets. The seaweed is then carried into the factory, washed in water, poured into a square shape, and dried at a temperature of 51~54 degrees Celsius.

Japanese people eat nine billion pieces of seaweed per year in foods such as sushi, rice balls and dried seasoning for sprinkling on rice. This essential item part of the Japanese diet is produced by the effort of people like Takehiko, who go out on the cold ocean during the winter months. He is currently processing his seaweed in a factory belonging to colleagues but is already constructing a new factory of his own. It will cost 100 million yen, but the government will support 75 per cent of the cost. Without such financial backing, it would be impossible for survivors of the tsunami to restart their businesses.

“I will have production back to 100% this spring. I would like more people in Japan and around the world to taste my seaweed”, 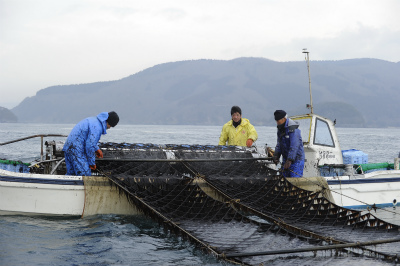 says Takehiko. Even after his factory is rebuilt, work to shore up the sea wall in Ishinomaki will still be needed in order for him to carry in the seaweed directly from the boat to the factory as before.

Although such inconveniences remain, the irony is that the nutrients in the water are far more plentiful than before the disaster because the tsunami stirred up the ocean bed so dramatically.

Only 16 out of 22 seaweed cultivators have come back to the port of Ishinomaki. But for one of them at least, life will soon be fully back under control. ENDS