By Francis Markus in Iwaki

After the minibus delivering the children back from kindergarten comes to a stop in the prefabricated housing community, Takahito Ito hops out and takes the hand of his waiting mother, Junko. He’s a lively child, sometimes a little unruly in a way 5-year-o lds know best how to be.

“When we learned that the Aozora kindergarten would re-open and the old teachers would come back, we were so happy,” says Junko.

After the Fukushima nuclear accident, Junko and her husband had moved with Takahito and their two other children to another prefecture. They decided to return in April 2012 after hearing that the schools in their hometown Naraha would reopen – although not in the town itself, which remains in the restricted area near the Fukushima Daiichi nuclear plant, but in the city of Iwaki, some 20 kilometres away.

The kindergarten reopened in December 2012 with support from the Japanese Red Cross Society. For the Ito family, the reopening of the kindergarten – along with the schools attended by their two eldest sons, aged 13 and 10 – marks a return to a more social life.
The difference in Takahito’s behaviour is noticeable, Junko says. “During the time he was forced to remain at home, he behaved like a spoiled child, not in a babyish way, but seeking more affection from us.”

“But once kindergarten started, he even enjoys taking the bus bus. This is the first time for him to commute by bus, and every morning he is excited to get on the school bus.” 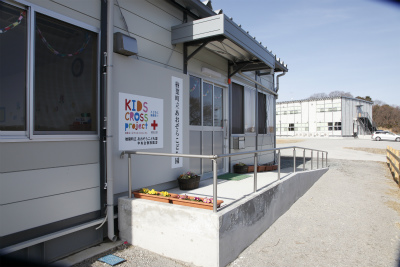 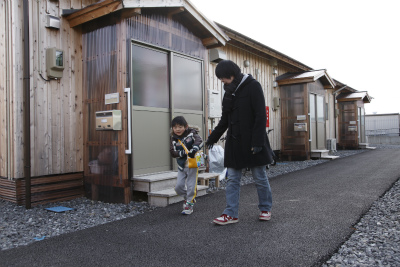 The reopening of the kindergarten, in a location clustered together with prefabricated primary and junior high schools from the same town of Naraha on the property of a local university, marks an important milestone, not just for individual families but for the whole community of residents displaced from Naraha.

“We are being told that it will be safe to return to Naraha in two to three years’ time, so this kindergarten is really important to help keep a sense of community among the residents during that time period,” says the principal, Kazuhiro Abe.

However there’s no shortage of troublesome issues. Asked about the recent revelations that decontamination has not been carried out properly in a number of areas in Fukushima Prefecture, Mr. Abe says that people felt they were not given proper information when they were assured that the Fukushima nuclear plant was safe before the accident. The issues with decontamination merely reinforce people’s sense of distrust, he says.

For the Ito family, meanwhile, the more immediate concern is finding employment. Junko says her husband used to work in Naraha town, but he lost his job after the earthquake. “We actually didn’t look for a job in Kanagawa Prefecture”, where the family evacuated to after the disaster, “because we had no idea when schools would re-start in Fukushima” but now that Takahito is re-established in kindergarten, his father is looking for a job nearby. Step by step, the family is working to return their life to as near normal as possible in the aftermath of the 2011 disaster. ENDS