By Francis Markus in Motoyoshi 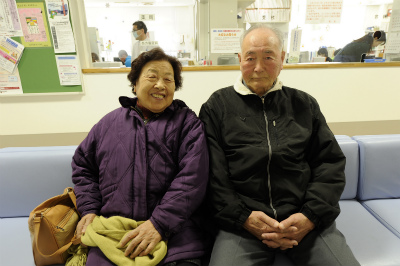 Yoshiko Sugawara, 83, is sitting in the hospital waiting room, looking after her husband, who has just had a medical exam to see if he can be admitted to the day care centre. She gently explains things to her spouse, who’s suffering from memory loss. But her own health has not been good since the tsunami two years ago either.

"I've had lots of psychosomatic health problems after the disaster – my daughter in law and grandchildren spent ages struggling in the water and my son’s home was 70 per cent destroyed," says the elderly woman.

She says her son comes to visit her and her husband each evening after his hour long journey from work.

But she is not the only one whose care they appreciate. Dr Minoru Kawashima, the chief physician of this public hospital, about 20 kilometers from the tsunami-devastated port of Kesennuma “has come to our house 5 or 6 times to give me infusions,” she says.

Mrs. Sugawara says she is gradually getting better, after experiencing a prolonged period of all kinds of pains all over her body.

She also appreciates the environment of the hospital, renovated last year partly with the support of the Red Cross.

"It's very nice here now and we're very grateful to all those people abroad who supported this hospital," she says.

Of course the impact of the hospital is due, in great measure, to Dr. Kawashima, a former boxer, who came to the disaster area as a volunteer and says he was persuaded to stay by local politicians. 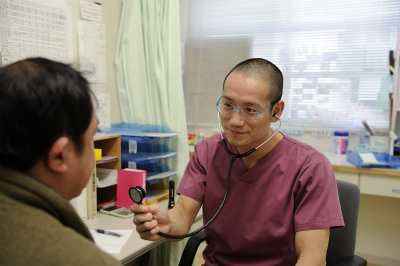 He says the emotional state of local residents is gradually lightening. "Two years ago, people would cry during consultations, but now they are able to talk about their feelings."

Still, he feels, there is a need to address local survivors’ emotional issues directly.

"From April, we will announce to people that they can come here for basic psychiatric treatment" – although cases which he and his small team cannot handle, will continue to be referred to a larger hospital in Kesennuma.

His decision to start a home visit service brought a stressed reaction from hospital staff, “but now they see that people are very grateful to them and this is the reward for all their hard work.

He plans to try to get round the problem by inviting more young trainee doctors who don’t yet have families. He has left his own family behind in neighbouring Yamagata prefecture. “I would like to be able to see them more often” than the present once a week, he says ruefully. ENDs