From Tohoku Two Years After the Quake (vol.3): Despite the slow pace of reconstruction some business re-opened (March 7, 2013)

By Francis Markus in Kesennuma 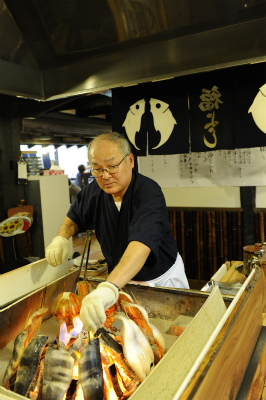 Like an emperor commanding his courtiers, Kenichi Murakami presides over a circle of grilling fish speared on wooden sticks and leaning in towards a roaring charcoal fire.

Despite the devastation of the tsunami, which wiped out his old restaurant, he has managed to rebuild his business, taking on a heavy burden of loans, mitigated in part by funds provided by the Kuwaiti government, through the Japanese Red Cross Society.

Business is lively, but he has his concerns. “The number of customers is similar to before the disaster, but many of them are people working on reconstruction and humanitarian workers and I’m not sure what will happen when they leave,” he says.

For now though, he is living a long-held dream of running a restaurant which is right on the seafront. Although he had to sign an agreement with the local government, agreeing to move, if and when the land is re-zoned.

Murakami looks at life and the whole experience of the disaster philosophically. “I hear lots of people say the recovery is slow, or that nothing has been built back yet, but when you think of the magnitude of the disaster, the fact that we have been able to get back to normal, we have food, blankets, air conditioners, compared with refugees all over the world we are very fortunate.”

“This is all thanks to others’ support, but we wouldn’t have received such support if we hadn’t supported others in their time of need,” he says.

When asked what his message is for those who are trying to rebuild their businesses, he says that words are of little help – it is money which counts. “Basically, no matter how much assistance and support you get, it is your own efforts which are important.”

Murakami’s restaurant is in the port of Kesennuma, which became famous after the tsunami for the grounded ship, several hundred meters inland, where it was left by the disaster.

That ship is still there, with a small altar of floral tributes in front of it. Behind the vessel meanwhile, is a temporary building that turns out to be a warehouse containing cardboard storage containers used for fish and other commodities.

Kazuhiko Oikawa, 57, used to be a “salaryman” for a local company. Now, for the time being he’s working as a warehouseman in this tempoary structure and living in a rented apartment. 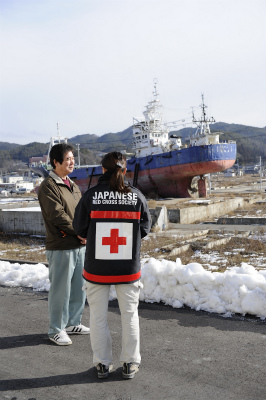 “It’s difficult for businesses to rebuild, because we still don’t know what is going to happen with this land,” he says pointing to the vista of nothing but foundations left behind by the tsunami.

Oikawa has had his share of difficulty and sadness. He had to spend the cash grant raised from donations through the Japanese Red Cross on medical care for his sick father, who subsequently died. “He couldn’t get used to the new situation after the disaster.”

But you can’t help being struck by his cheerful manner as he moves ahead with his life as best he can – and hoping that he and the rest of this town will get back to a more normal life as quickly as they can. ENDS