From Tohoku Two Years After the Quake (vol.1): A snowbound reunion for the students of Tomioka High School (March 6, 2013)

A snowbound reunion for the students of Tomioka High School

By Francis Markus in Inawashiro, Fukushima 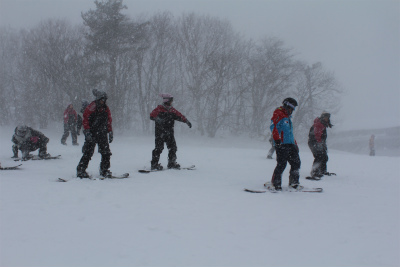 A roaring blizzard is blowing the snow with such force that it cakes my face within a minute. But that seems only to add to the fun the teenagers are having. Shrieks and whoops of delight ring out across the mountainside as they venture, many for the first time, out on skis and snowboards.

"It was great fun,” says 18-year-old Saki Hayata. But the point of this activity isn’t just getting healthy outdoor exercise. It’s also a precious opportunity for a reunion among the students, who are all from Tomioka High School, which is an unusual institution in several respects.

The original school was located about nine kilometers from the Fukushima Daiichi nuclear power plant. Damage to the reactors caused by the 2011 Tsunami meant that it was one of nine schools in the prefecture that had to be relocated, with the students split among several different schools – some of them hundreds of kilometers apart.

Now, two years after the disaster, many of the areas less severely affected by radiation are being declared safe for residents to return. Tomioka High School is the only school whose pupils remain spread among four different schools. 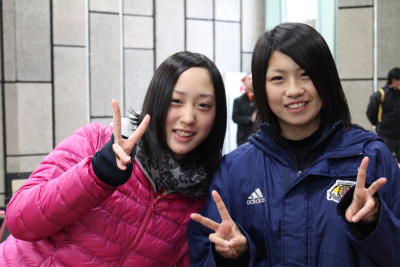 “This does affect the students’ morale, but at the same time our students are very motivated, because this is a very unique institution,” says vice principal Yoshiyuki Hangai.

Part of its uniqueness lies in the fact that one of its programmes – sports – attracts students from all over Japan, who hope to be professional athletes. The school also offers courses in social service and international communications.

Helping the students to get back together – many have not seen each other since last summer – is the rationale behind the Japanese Red Cross’ decision to support this reunion which is being held in the mountainous inland part of Fukushima Prefecture.

“Since the disaster, I have grown to appreciate much more the support I receive from teachers and friends and family and other people. I also realized that that I have been taking for granted my everyday routine or the three meals a day I have. These are not things given as a matter of course,” says Hayata, one of the students.

She and her friend Manami Yoshitake have been separated with one of them in northern Fukushima and one in Shizuoka, several hundred kilometers away to the south of Tokyo.

Another 18-year-old student, Tomoya Sakazaki, believes that Tomioka town will revive in five years or more.

“The government pledged that they will make every effort to make all of Fukushima habitable again, so I’m sure the revival of Tomioka will happen. I will leave Fukushima to go to University next year, but will come back to Tomioka.”

As the students enjoy themselves out in the snow, Fukushima Red Cross director, Takeyoshi Saito, says, “one of the biggest challenges for us is finding ways to help those communities who are not yet able to return to their homes.”

Local authorities say there are plans to build a new temporary school which can accommodate all the students from Tomioka High. But in the meantime, helping these students to stay connected with each other is clearly one useful strand in maintaining a sense of cohesion amid what are still unsettled times. ENDS