July 6 is Vaccine Day. The establishment of the day is in tribute to the fact that on this day in 1885, a modern vaccine developed by French microbiologist Louis Pasteur was successfully given to a nine-year old boy suffering from rabies. Now, various organizations are promoting vaccines, spurred on by the establishment of Vaccine Day. 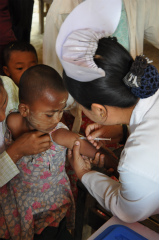 Vaccination is said to be the most effective health policy with high cost-benefit performance, saving the lives of two to three million people in the world every year. In developing countries, however, up to 19 million children four-years-old or younger cannot get vaccinations. The GAVI Alliance (Global Alliance for Vaccines and Immunisation) was set up in 2000 at the World Economic Forum in Davos as a global effort to provide better access to vaccination in developing countries. Since then, the GAVI Alliance has been working in 73 countries all over the world and has provided vaccinations to almost 326 million children, saving more than 5.5 million lives in a decade. Headquartered in Geneva, Switzerland, the Alliance brings together developing country and donor governments, the World Health Organization, UNICEF, the World Bank, the vaccine industry in both industrialised and developing countries, research and technical agencies, civil society, the Bill & Melinda Gates Foundation and other private philanthropists. In June 2011, GAVI had its first pledging conference, and called on governments of the world and members of the Alliance for assistance in raising funds estimated necessary for vaccination and health programs during the 2011-2015 period. In response, the government of Japan contributed 9.3 million U.S. dollars (about 830 million yen) in 2011. 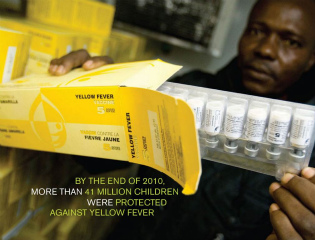 As of 2012, GAVI provides pentavalent vaccines (diphtheria, tetanus, pertussis, hepatitis B and Haemophilus influenza Type b), rotavirus vaccine, pneumococcal vaccine, and others. The GAVI Alliance established the International Finance Facility for Immunisation (IFFIm) in 2006 with the World Bank as its fund manager to collect funds for the sustainable and planned provision of good vaccines to developing countries. IFFIm uses donor countries’ ODA and issues vaccine bonds in cooperation with their business circles.

The sale of vaccine bonds in Japan started in 2008, and about 30,000 bond purchasers, one half of the total of 60,000, are Japanese, many of them individual woman investors. According to IFFIm, of a total of 3.7 billion U.S. dollars obtained from the world capital market, an equivalent of 1.8 billion U.S. dollars was obtained in the Japanese market. Recently, EuroWeek, a finance magazine issued in London, cited the February 2008 inaugural retail bond issue in Japan by IFFIm as among the 25 most influential deals, saying “IFFIm has inspired the Japanese investor base to become the most enthusiastic supporter of socially responsible investments anywhere.” As the total amount of socially-responsible bonds sold to Japanese retail investors by all issues now stands at 6.600 billion U.S. dollars, it can be said that vaccine bonds have accelerated the penetration of socially-responsible bonds in Japan.

Time Magazine in the U.S., in its December 29, 2009 edition, carried a feature article entitled, “The Rise of the Ethical Consumer.” “Ethical consumption” means ethical or moral consumption, which requires efficiency from a broader altruistic viewpoint, taking care of the environment or making a social contribution. It had been gradually spreading in Japan in recent years, but triggered by the rehabilitation assistance from the Great East Japan Earthquake on March 11, 2011, in particular, interest is prominently increasing among women. As the example of vaccine bonds demonstrates, this trend is extending to the field of investment. In Europe and the U.S., the market of SRI (socially responsible investment), an investment conducted in light of corporate social responsibility (CSR), has been expanding, and one of the factors is said to be an increase of investors who take the ESG factors (environment, society and governance) into consideration when investing. While worldwide interest in CSR is growing and social business which intends to solve such social problems as poverty and human rights through business activities is getting people’s attention, the tendency to place importance on ethics in terms of both consumption and investment is getting stronger. 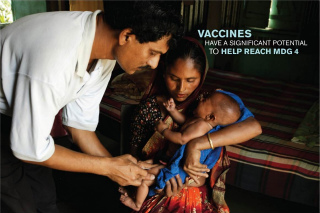 To achieve the “reduction of the mortality rate of children under five,” one of the 18 targets described as the Millennium Development Goals (MDGs) to be achieved by the year 2015, GAVI plans to vaccinate 250 million children and save about four million lives. During the World Immunization Week held in late April this year, two new vaccines --- pneumococcal vaccine and rotavirus vaccine --- were used in Ghana for the first time in the African countries. In June, new vaccine bonds whose aggregate nominal amount is about 131.4 million U.S. dollars were sold in the Japanese market. As Mr. Jim Yong Kim, who assumed presidency of the World Bank on July 1, 2012, is an expert in health problems in the poverty-hit areas, it is anticipated that the issues of global health and vaccines will be one of the major agenda items at the annual meetings of the IMF and World Bank Group to be held in Tokyo in early October this year.

※Photos were provided by GAVI Alliance. 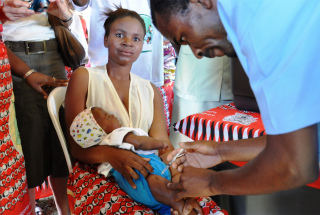