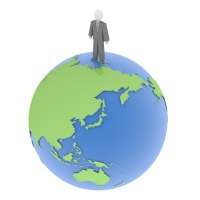 Since last year, Japanese companies have been facing severe business conditions as a result of the Great East Japan Earthquake, catastrophic flooding in Thailand, a downturn of the world economy, the “historic” appreciation of the yen, and electricity shortages. While concerns are heard that export industries will be damaged and that industrial hollowing-out will be triggered by the increased transfer of production bases overseas. At the same time, however, there are moves among companies to go global, making use of these adversities. Based on domestic news reports, this issue introduces some of these moves.

One move worth noting is that Japanese companies have started to disperse their production bases overseas to avoid risks, which have been conspicuous since the 3.11 disaster. A Nikkei article on March 7, 2012, reported on such moves of Japan’s major companies; Mitsui Mining and Smelting, Co., Ltd. opened in Malaysia a new production line of “MicroThin,” extremely-thin electrolytic copper foil to be used in smart phones, for which the company boasts a 90% share of the world market, and HOYA Corporation newly established in Singapore a production base of “Mask blanks,” circuit plates necessary for semiconductor production -- of which HOYA has an 80% world share. Both companies had production bases only in Japan before 3.11, but the disaster and the experience of temporary closedown of operation caused by planned blackouts in the summer last year made them decide to move their production bases overseas from the viewpoint of crisis management. About such a move, the article said, “The 3.11 disaster revealed that the production bases of parts and materials that world-class manufacturers need are concentrated in Japan....... Companies move from “concentration” to “disperse.” This very move, they are sure, will improve the credibility of Japanese products and ‘protect the domestic production in the long run (President Sadao Senda, Mitsui Mining and Smelting Co., Ltd.)’ ”

Another move worthy of attention is the massive expansion of mergers and acquisitions (M&A) of foreign companies by Japanese companies. According to a Sankei Shimbun on-line article on April 6, a survey conducted by RECOF, a company that plans and proposes M&A, revealed that the numbers of Japanese companies’ M&A cases and amounts paid for foreign companies in FY2011 were 474 cases (1.2 times bigger than the previous year) and 7,326.4 billion yen (more than 2 times), both recording new highs. Mr. Shinsuke Tsunoda, head of M&A of Nomura, said to the Sankei Shimbun, “The number of companies which, even if the investment amount is bigger than advancement overseas on their own, facilitate going abroad as M&A offers factories, sales channels and human resources all at once.” The article said, “The food and pharmaceutical industries, which had been regarded as domestic market-oriented, are now active M&A players overseas. The historic appreciation of the yen and the abundant money accumulated from refraining from capital investment will urge Japanese companies to continue M&A.”

Some Japanese companies are making new moves toward globalization in terms of personnel matters and working conditions. In 2010, Rakuten, Inc. and Fast Retailing, which operates the UNIQLO chain, came up with a policy of making English their official internal language of communication, and this is still fresh in our memories. According to news reports, with business operations overseas in mind, Fast Retailing hired about 80% of its new graduates from foreigners, with a view to raising its international competitiveness by means of a global recruiting policy. An article in President Online on April 24 said that Shiseido Co., whose overseas sales ratio accounted for more than 40% when accounts were settled in March 2011 as it operates business in 88 countries and regions, has begun in earnest to acquire and foster global human resources, which could be described as “stateless human resources.” Many Japanese companies have so far maintained the seniority-based personnel system with their headquarters in Japan controlling the top executives of their local subsidiaries overseas, while giving them free rein to make budget and personnel decisions. However, Shiseido has introduced a system to put the right person in the right place on a global basis after selecting global leader candidates from among all over the world as well as Japan.

Dispatching young employees abroad is also promoted. According to a Sankei Shimbun on-line article on November 19, 2011, a larger number of Japanese companies are making efforts to develop global human resources because of the intensifying international competition. These companies include, the article wrote, the Mitsubishi Corporation, which obliges all the employees who have been working in the company for eight years or under to have experience abroad, and Hitachi, Ltd, which is increasing the number of employees dispatched abroad tenfold.

The move to win the global competition for recruiting talent is not limited to companies. In January this year, the University of Tokyo announced a basic plan to completely change its entrance time from April to autumn. One of the reasons behind this decision is said to have been the increasingly severe international competition among universities. The university intends to attract talented foreign students by having the same entrance time as major universities abroad. The University of Tokyo hopes to introduce the new entrance time together with other Japanese universities. It actually called on eleven universities, including nine national universities including Kyoto University, to consider participating in a discussion.