In Tokushima Prefecture, 35.5% of the villages claim that more than half of their population is aged 65 or over, which is 2.3 times the national average. 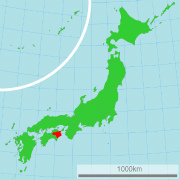 The examples of the impacts of the aging of society are: difficulties in accomplishing activities together in the community, people forced to leave through lack of work in the area, increase of vacant houses. On the other hand, to overcome these issues, there are new movements to re-evaluate a village’s resources.

One approach is to utilize ICT (Information and Communication Technology） to attract information and communications companies in the Tokyo Metropolitan area to set up satellite offices in Tokushima. The Prefecture made a choice to spread fiber-optic cables all around the prefecture, since it was cheaper than constructing a new antenna for digital terrestrial broadcasting. As a result a hi-speed Internet environment, faster than that of Tokyo, now exists even in the mountainous areas.

In 2010, a Tokyo-based IT firm launched a satellite office in the town of Kamiyama, located about 30 kilometers west of Tokushima City. Inside the 70-year-old office, where the development environment is the same as that of the Tokyo office, workers uses TV phones and Twitter for communication.

The rich natural resources such as crisp clean air, clean water, and magnificent scenery, are helping reduce the tiredness of the mind and body of the workers and contributes to raising that performance. According to the employees’ Blog, workers get involved with community activities on weekends and contribute to revitalizing the town.

Last September, about 10 business enterprises from the Tokyo Metropolitan area participated in a demonstration experiment in the depopulated areas. The second experiment was conducted from October to December. The objective was to look into the cost of running the office and to ensure information security. In mid-December, several companies from the capital area participated in the “Satellite office experiment tour” to experience one of the best broadband networks in Japan.

Establishing this radically new village re-vitalizing project model is expected to achieve the following: Dispatch of information using social media to widen the sales of local produce and vitalizing tourism, job creation by collaboration of local and non-local companies, and giving ideas to children and young persons in the area by offering business models.

After the Great East Japan Earthquake and the Fukushima Daiichi nuclear accident, there are some movements to relocate offices outside the metropolitan area to disperse risks and to review the working style so that employees can spend more time with the family members.

Will this business model from Tokushima become widely accepted by Japanese companies?

Map of Japan with highlight on 36 Tokushima prefecture.svg（Wikipedia）