The feat of the Hayabusa asteroid probe, a Japanese astronaut’s long stay in the International Space Station, and confusion caused by artificial-satellites-turned space debris* falling onto the earth; Japanese people also have more opportunities to pay attention to space. We live on the earth without thinking about it, but in the vast expanse of space, environmental happenings beyond terrestrial imagination are taking place: solar corona gas, x-rays, and ultraviolet rays, an increase in cosmic radiation, and strong magnetic storms, to name just a few.

We make use of outer space in many different ways: weather satellites for typhoon monitoring, GPS (global positioning system) satellites for car navigation and cell phones, and communications satellites for telecasting, for example. “Space Weather (changes in the Geospace --- the region of outer space near the Earth),” a term used on the analogy of such climatic phenomena as rain and wind on the ground, could have an unfathomable impact on us, causing system failure, for example. Space weather forecasting is therefore required to monitor correct space information and to avoid harmful effects on social infrastructure.

Though international efforts have been started on the space weather forecast, the term may sound unfamiliar. In this issue, we will introduce a research organization working especially on the Geospace environment, as Geospace will be a living sphere for human beings in the near future.

*space debris: Obsolete artifacts orbiting the earth: satellites and rockets that are no longer in use, jettisoned satellite’s parts in operation, and broken pieces of satellites or rockets. Debris was originally a French word meaning broken pieces.

The Space Environment Research Center (SERC) of Kyushu University is engaged in pioneering investigative research, using state-of-the-art technologies. It is located n Kyushu University, which is very active in academic, cultural and other international exchange. SERC was opened in July 2002, 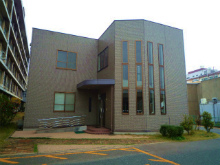 with a view to creating a new academic branch of science, namely the geospace environment science, conducting studies to put the space weather forecast or space debris warning into practical use, monitoring the global geospace environment on a real-time basis, making a database and sending out information. Magnetometers have been installed in more than 50 places all over the world to monitor magnetic forces on the earth, which SERC collects and analyzes.

SERC is now trying to set up a monitoring network of space weather on a global scale, to be called Magnetic Data Acquisition System (MAGDAS), to work out the mechanism of space weather and to make it possible to predict events that can affect human life. 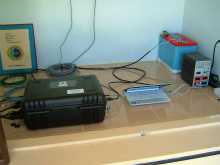 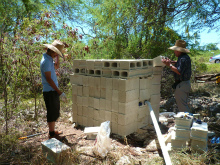 Since immediately after its establishment, SERC has been releasing space weather information on the daily moves of the sun, solar wind and activities of the geomagnetosphere and send it out to the world. 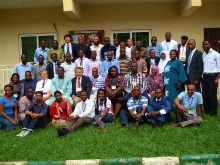 science (including the study of space debris) and developing human resources, thus contributing fully to the space weather study and its education.

photo right:
This August in Nigeria
Participants in the ISWI/MAGDAS school

After the 3.11 disaster, media have picked up the risk of giant quakes occurring right under the Tokyo Metropolitan area. Meanwhile, the Mainichi Newspapers on September 26 carried an article titled, “Mega quakes occur more frequently when the sun has fewer sunspots,” introducing an analytical study suggesting a relationship between solar activity and the occurrence of great quakes.

The study was made by a team led by Prof. Dr. Kiyohumi Yumoto, SERC director specializing in solar-terrestrial physics and space and earth electromagnetism. The article says that the team’s analysis was that mega quakes occur more frequently when the sun has fewer sunspots, and that the Great East Japan Earthquake occurred when the sun had fewer sunspots. The Mainichi continues that this survey deserves attention as a result suggesting that solar activity could have an effect on the earth’s interior.

It is well known that the number of solar spots changes in a cycle. Though there have been studies and opinions on the relation between the solar activity and premonitory phenomena of earthquakes, no definite conclusions have been reached so far. According to the Mainichi article, Dr. Yumoto says, “We don’t know what connects the solar activity with the earthquake occurrence, but we want to get a clue in working out the mysteries of earthquakes.”

It may be beyond our understanding that solar activity has something to do with earthquakes, but by thinking they have some kind of relation, we think that we will not forget the 3.11 disaster and that we can prepare for future disasters. 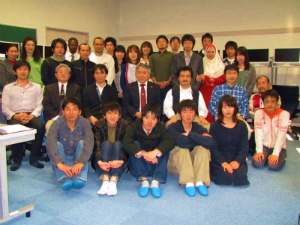 Photo left: SERC faculty members, researchers and staff members, graduate and undergraduate students of the faculty of science belonging to the fields of solar-terrestrial physics and space and earth electromagnetism