【City of Sapporo】Hosting the World Winter City Association for Mayors: Exposing the magic of summer

This time of year in Sapporo, a city blanketed in pristine white snow throughout winter, the scenery takes a drastic leap into the vibrant hues of summer. Here in the midst of the green-saturated and breezy atmosphere that accompanies the Northern Country’s fleeting summer, residents and tourists alike are gearing up for the annual YOSAKOI Soran Festival, Sapporo Odori Beer Gardens and other events in which visitors get their fill of the best of the season.

In the end of July this summer, Sapporo aims for further growth through hosting the World Winter City Association for Mayors (WWCAM) Mayors Conference for the first time in 34 years. With the Mayor of Sapporo sitting as the association’s president, WWCAM is a network that unites winter cities of the world and gathers their mayors at the Mayors Conference every other year, serving as a platform for learning from each other’s case studies in urban development unique to cold regions. This 17th Mayors Conference marks the first time the event will be held during the summer – a move to highlight the attractive aspects of summer in winter cities. 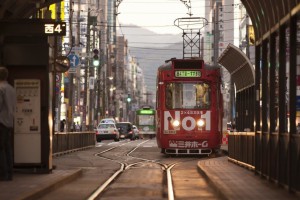 As for my idea of Sapporo’s summer charm – in other words, what I show my friends who visit from overseas? I like to show something that reveals Sapporo’s individuality. Among many such attractions, today I would like to introduce Sapporo’s street cars (Photo credit: Yang Xu, cameraman and resident of Sapporo’s sister city Shenyang).

The Sapporo street car route was closed into a loop on December 20 of last year, connecting the stops Susukino and Nishi yon chome with the addition of a stop at Tanuki koji shopping arcade – one of the most famous tourist spots downtown. Adding the introduction of the new Polaris street car before completion of the loop, the city continues to provide residents and tourist with greater convenience. The newly revamped street car system not only paints a picture of Sapporo’s modernity, but also conveys tales of its past.

The real thrill of riding the street car is without a doubt catching the passing cityscape from out the window. With its four distinct seasons Sapporo is a sight for the eyes any time of year, though I particularly recommend the summertime. After departing the bustling amusement district, the view from the window grows more and more lush with greenery. Another adventure is getting off at some stop you’ve never been to and aimlessly wandering the neighborhood while breathing in Sapporo’s invigorating summer air, discovering small shops as your stroll by.

When you think of the world’s large metropolitan centers, the image of people scurrying about in a concrete jungle of ever-stretching skyscrapers no doubt comes to mind. The streetcars that once ran through these centers across the world have disappeared from view alongside the development of cities. Riding in Sapporo’s old street cars that retain their history invites one to feel the slowing of time in pace with the relaxed speed of the car. To a person like me coming from a large city in inland China, this time is a truly luxurious experience.

Scenery viewed with a calmed mind always appears in a different light. Sapporo’s charm is born out of scene of its old street cars against brilliant red evening sun of summer. It is my hope that participants in this year’s Mayors Conference may experience the full thrill of summer in “Winter City Sapporo” and rediscover the possibilities presented by winter cities.

<Official site of the World Winter Cities Association for Mayors>