【Kawasaki City】Business Opportunities are Waiting at KING SKYFRONT, an Innovation Hub at the Doorway to Japan!

Right across the Tama River from Haneda International Airport, development is steadily continuing at the world-leading innovation hub— KING SKYFRONT. Located in the center of the Keihin Industrial Area, KING SKYFRONT is a brand-new R&D/business hub specializing in those fields from which much growth is expected from here on out, including the health, medical, welfare and environmental science realms. 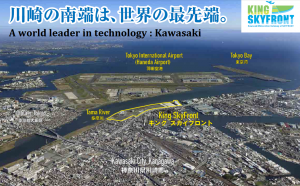 An Accumulation of National Institutions and Global Enterprises

By FY 2017, we will have nearly completed gathering the following companies to the area. 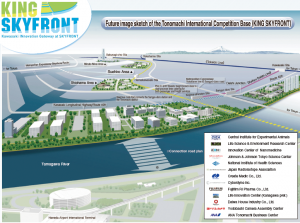 Considerable effort is being put into the development of the cityscape at KING SKYFRONT in order to make it a global hub worthy of representing Japan to the rest of the world.

Progress is being made on the implementation of a plan envisioning the scenery and functionality that must be introduced in order to realize our goal of becoming a world-leading center for R&D. Some examples of current aims include the laying of underground telephone/power lines, promotion of urban greenery, the introduction and utilization of hydrogen energy systems, etc.

Additionally, in order to promote free interaction among researchers in a university-like fashion, there are also plans to develop such amenities as cafes, restaurants, and lodging facilities. 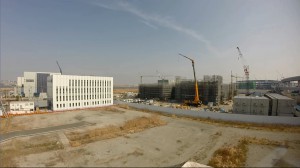 Development of the world’s most business-friendly environment through the strengthening of cooperation between the Keihin Coastal Area—of which KING SKYFRONT is the center—and Haneda International Airport is considered one of the cornerstones of the strategy to grow Japan as a whole.