Akita Prefecture is situated in northwest mainland Japan and is surrounded by abundance of natural resources. With abundant sources of pristine water and a cool climate, Akita is an area which is famous for its rice growing, which has extended into the realm of sake brewing. Currently, there are 38 sake breweries which make their own sake.

In recent years, Akita prefecture has been working proactively to export many prefectural products, starting with sake overseas. This expantion of trade with other countries is not just to increase opportunities of fostering relationships with relevant organizations and personal exchange with East Asia and the West, but to also promote via expositions such as trade fairs, sales negotiations, and product shows.

2013 to 2015 was the first time that we experimented with an export project to Australia. As the popularity of Japanese cuisine, increases in Australia, so does the success of sake import. Due to their high economic status, affinity for acquisitions, as well as being notorious as a nation that frequently partakes of alcohol, on top of the promising prospects of a rising population, we are hoping to expand into their import market. On the front world of the market for alcoholic drinks, Japan’s export amount of sake ranked 9th. Furthermore, the export volume of sake to the U.S. occupied 5 % of the whole amount of export of alcoholic drinks (Record of National Tax Agency, Result in 2013). From that point, we held sales promotions to extend sake export both domestically and to Australia. 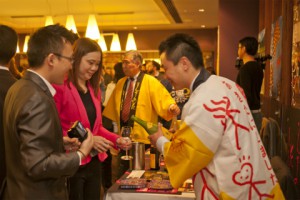 The first step to develop the sake market overseas is to develop sales in things such as Japanese restaurant. Second, we will offer sake that pairs well with local cuisine, which should attract consumers in the wine market. In order to find potential for sake in Australia, we held a special event, called the “Marriage of Sake and Australian Lamb” at a restaurant in Tokyo in 2013. We tested how Akita’s sake would match well with lamb. Because of the strong Umami flavor in amino acid contained in the red meat of Australian lamb, it is recommended that sake which also contains high concentrates of amino acid are used. From these points, we have proven the importance of the brewing and selection of appropriate brands of sake for export to Australia.

In the fiscal year of 2014 (April – March), three breweries from Akita went to Australia to hold a sales negotiation conference with local import agencies. In order to expand additional sales channels, in 2015 we held a sales promotion event with the assistance of local restaurants and shops. Four of Akita’s breweries and one food establishment participated in promotion events in Sydney and Melbourne, where they offered a sampling session of Akita’s sake and some original dishes, which were made from Akita’s produce. About 110 people came and said things such as “Every sake has great individuality and deliciousness, and that it was fun to compare each breweries sake”. 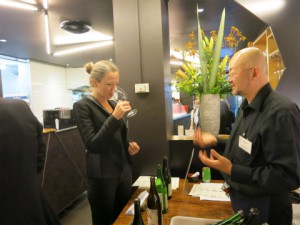 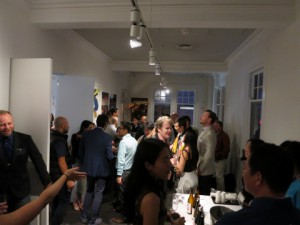 Throughout this three year promotional project, we have come understand Australia’s economic circumstances, culinary culture, and the needs of its market. With the focus of developing of sales of Akita’s sake, as well as bringing in more tourists to our ski slopes and hot springs, Akita is thinking of improving the awareness of its cuisine culture as well.

Department of Tourism, Culture and Sports