Four years have passed since the 2011 Great East Japan Earthquake. Efforts to apply the lessons learned to disaster prevention in the future are underway in a variety of fields. Shimizu Corporation (president: Yoichi Miyamoto) is no exception, having finished construction on and begun operations at the Advanced Earthquake Engineering Laboratory built on the premises of the Shimizu Institute of Technology (Koto-ku, Tokyo), with the goal of applying the lessons learned to research in earthquake countermeasures as soon as possible. With two of the most advanced shaking tables in the industry installed, research is being carried out on both technical and human-based aspects, through experiments in these cutting-edge facilities and risk analyses of the experimental data. 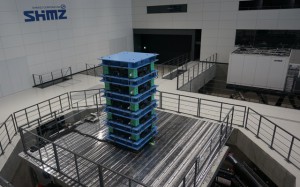 According to Shimizu, Japanese construction standards are strict from an international perspective, but buildings built before the Buildings Standards Act was significantly revised in 1981 are insufficiently earthquake resistant or reinforced. Many of the buildings damaged in earthquakes such as the 1995 Great Hanshin Earthquake belong to this category. Shimizu has been researching earthquake countermeasures since the 1970s, but after the Great East Japan Earthquake “exceeded expectations,” construction began on a new research facility in June 2013 that could carry out high-level experiments on all kinds of possible earthquakes, massive or otherwise.

The newly completed research facility includes two shaking tables, the E-Beetle (large-scale shaking table, 7 m × 7 m) and the E-Spider (large-stroke shaking table, 4 m × 4 m)*. The E-Beetle can reproduce earthquakes with acceleration and displacement greater than any earthquake observed so far worldwide, as well as different types such as inland earthquakes and subduction-zone earthquakes. It will aid in discovering the mechanisms of building collapse, and the earthquake resistance properties of building fixtures and features such as ceilings. The E-Spider can reproduce long-period, large-stroke motions in three dimensions (horizontal, vertical, and rotational). This makes it possible to study how super-high-rise buildings sway and the movement of furniture inside rooms.  By mounting a cabin on the shaking table that people can enter, it is also possible to study the effects of earthquakes on human psychology and behavior. Data from these experiments will be incorporated into future construction methods.

*The ’Beetle’ in the name comes from the table’s powerful, beetle-like appearance, and ‘Spider’ is from that table’s shape and movements. The ‘E’ in both names refers to the first letters of Earthquake, Examination, Enhance, and Excellence. 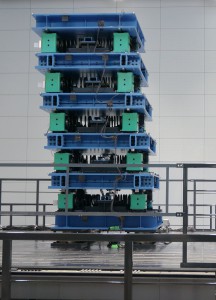 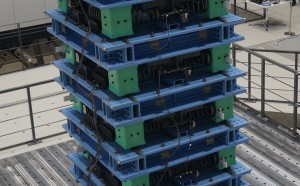 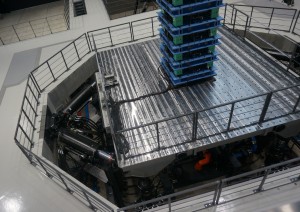 On March 4, the new research facility was opened to foreign media and experiments were held using the two shaking tables. The experiment with the E-Beetle used a miniaturized model (3.8 m, 13 t) of a 150 m, 40-story super-high rise building, and reproduced the shaking (Japan Meteorological Agency seismic intensity of 6-lower) observed in Miyagino, Sendai during the Great East Japan Earthquake. It was clear that sections of the model shifted more the higher up they were (see photos above). The E-Spider reproduced four types of earthquake motions: 1) intensity 3 and 4 (on the ground), 2) intensity 6-upper (5th floor of a non-seismic isolated apartment), 3) intensity 6-upper (5th floor of a seismic isolated apartment), and 4) the Great East Japan Earthquake in Tokyo (24th floor of a super-high-rise building). The screen inside the cabin displayed furniture moving in sync with the motion of the shaking table (see pictures below). The comparison with 2) and 3) between having seismic isolation and not having it reproduced motion similar to the upwards thrusting of the Great Hanshin Earthquake (stroke reduced by 50% for safety reasons), and 4) reproduced the large, long sideways motions (long-period motions) unique to super-high-rise buildings. By providing these earthquake simulations, Shimizu hopes to contribute to disaster-prevention awareness. 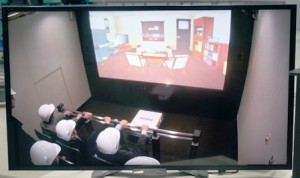 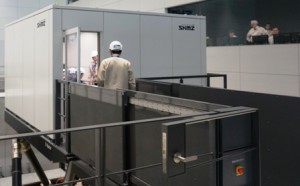