Four years after the earthquake, the Junior Disaster Management Test is becoming more common in schools

● More Japanese elementary and junior high schools are introducing the Junior Bosai Kentei [Junior Disaster Management Test] (JBK), which helps children develop the skills to save themselves at the time of disaster. An increasing number of local governments are also including test fees in their budgets.

● The reasons behind the growing popularity of this test lie in the Great East Japan Earthquake, with a tragedy at one elementary school and a miracle brought about by the disaster education of a local government.

● The organization running the test would like to increase the number of schools participating, with the belief that if children have improved awareness of disaster management, then it will not only help save the children’s lives, it will also benefit adults and the community as a whole. 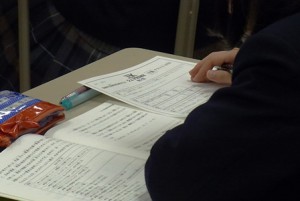 The Junior Disaster Management Test, a test targeting elementary and junior high school students that is run by a private organization, is becoming more widespread. Of the 19,000 people who died or went missing in the Great East Japan Earthquake, many were children who were at school, apart from their parents. Learning from this disaster and having children learn how to save their own lives is the goal of this test. 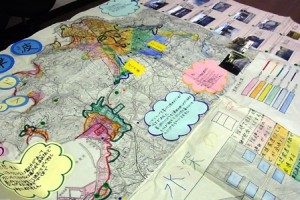 In early February at Akasaka Junior High School in Minato-ku, Tokyo, around 25 first-year students attempted the written portion of the JBK. The goal of the test is to cultivate the ability of children to make decisions and act independently during a disaster. Questions cover proper evacuation procedure when an earthquake or tsunami occurs, or how the student can help out while in an evacuation shelter. The test consists of three parts: 1. A report, for example, on the meeting point for the student’s family in case of disaster (before the test); 2. A written test (about 70 minutes); and 3. An assignment, for example, making a local disaster management map and poster (after the test). With the assignments before and after the test, the students are also made to think about disaster management in their household and community.

[Photo: Local hazard maps made by children as the initial assignment] 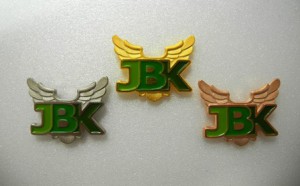 Mr. Kazuhisa Hamaguchi, executive director of the Bosai Kentei Kyokai [Disaster Management Test Association], the private organization that runs the JBK, said “We are making a special effort to make sure the children don’t feel that disaster management is difficult.” The Association marks and grades the assignments and tests, and gives a shiny badge to those with a total score of 70 or more, the passing grade.

[(photo) the badge received by those who pass the test. The test is divided into beginner, intermediate and advanced levels for each grade.]

The JBK started in December 2013, after the Great East Japan Earthquake. There is a standard test that can be taken individually, and group tests that can be taken by entire schools or local governments at once. 2,000 people took the test in the 2013 fiscal year, and 4,000 took it in FY 2014. Estimates are for about 10,000 to take the test in FY 2015. In the past two years, the number of local governments that have included the test fees (2000 to 3000 yen) in their budget, to support holding the tests at model schools and other schools that are interested, has tripled. In an unusual case for a test that is only two years old, the JBK has also received support from the Ministry for Education, Culture, Sports and Science (MEXT), and there is a growing demand for it in schools. 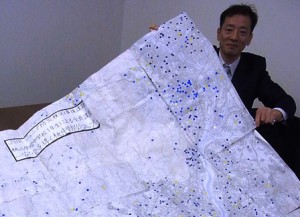 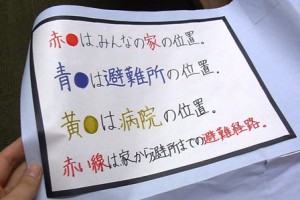 [Photos: Inventive pieces are submitted by children, including wall newspapers and posters]

Learning from Tragedies and Miracles

Why is there a growing demand? The reason lies in two very different stories from the Great East Japan Earthquake. The tragedy of Okawa Elementary School in Ishinomaki, Miyagi and the miracle of Kamaishi, Iwate. At Okawa Elementary School, children were too late to evacuate and were lost to the tsunami, with 74 dead or missing, almost 70% of the school’s students. In contrast, the elementary and junior high school students in Kamaishi had engaged in frequent disaster management training, such as learning about the mechanisms of tsunami, and since the children could quickly make an independent decision to run to high ground, almost all the elementary and junior high school students were saved(※).

Disaster drills have long been a part of Japanese schools. However, they tend to be simple drills of leaving the building and gathering in the schoolyard, and did not always save the lives of children in the Great East Japan Earthquake. Japan was also hit by the Great Hanshin-Awaji Earthquake in 1995, which took the lives of over 6000 people, but since it struck before school started, there were no school tragedies or miracles. Mr. Hamaguchi described how teachers are torn. “After the Great East Japan Earthquake, there was a sense of urgency that schools had to implement some kind of new disaster education. But there are no disaster management experts in schools, and class time is limited.” The reasons for the growing popularity of the JBK are likely the expertise a private organization can take advantage of and its ability to minimize the burden on teachers. Vice-Principal Chieko Muraishi of Akasaka Junior High School praised the program, saying “The test makes children think for themselves, and also gets their family involved. Teachers can learn from it too.”

A male student who had finished writing the test was asked how he would act if a disaster occurred. He responded as if it was obvious. “I’d protect my own life myself. That’s just fundamental. I’ve also talked with my family about what to do if an earthquake occurs.” According to Mr. Hamaguchi, there has also been at least one case where an elementary school student who wrote the JBK transferred to a different school and pointed out the lack of disaster awareness in the community to the local government. Mr. Hamaguchi spoke of his hopes, saying “If children have improved awareness of disaster management, then it will not only help save the children’s lives, it will also benefit adults and the community as a whole.” Nearly four years after the Great East Japan Earthquake, Japan is making an effort to apply the lessons learned to the next disaster.

※ The homepage for the Research Center for Disaster Prevention in the Extended Tokyo Metropolitan Area at Gunma University has more information on disaster education in Kamaishi.

Other Stories Related to Disaster Education

-  At Miyagi Prefectural Tagajo High School in Tagajo, Miyagi, where 188 people died during the Great East Japan Earthquake, a disaster science course will be implemented. This is only the second example of a course like this in the country, with the first being the environmental disaster management course implemented in Hyogo Prefectural Maiko High School after the Great Hanshin-Awaji Earthquake. The course is planned to begin in April 2016.

-   Students at the Tohoku University,  the Inter-Graduate School Doctoral Degree Program on Science for Global Safety, are making a disaster reduction action card game to help with disaster education. While enjoying the card game, players can learn what actions to take during a disaster. They plan to finish the game by March 2015 when the 3rd World Conference on Disaster Risk Reduction will be held in Sendai.