Nippon Telegraph and Telephone (NTT)  announced that it has entered into a partnership agreement with the Tokyo Organising Committee of the Olympic and Paralympic Games (hereafter “Tokyo 2020 Organizing Committee ”). The agreement relates to competitors representing Japan in the Olympics and Paralympics, and extends for six years, spanning the Tokyo 2020 Olympics and Paralympics to be held in 2020. With this agreement, NTT Corporation becomes the first gold partner, which is the highest level of domestic sponsorship program.

The services and group companies to which the agreement applies are “Telecommunications Services”.

(See here for the news release concerning this partnership)

NTT held a press conference concerning this matter on January 26, 2015. 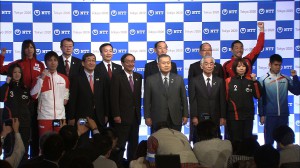 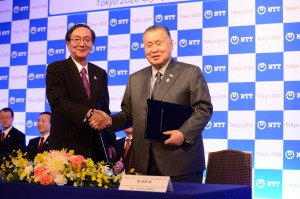 We have handled telecommunications for the Olympic Games three times in the past. When we were still NTT Public Corporation, we handled the first Tokyo Olympics and the Sapporo Winter Olympics. As NTT Corporation, were in charge of telecommunications for the Nagano Winter Olympics. I am very honored that NTT is able to collaborate to support the success of the 2020 Tokyo Games as well. I would like to take this opportunity to reiterate three points about our commitment.

First, we will ensure the highest degree of cyber-security over networks.

Second, and this was a key point in Tokyo's winning bid for the Tokyo 2020 Olympic and Paralympic Games, there is collaboration with various industries to achieve true hospitality.

Furthermore, we have supported almost 40 athletes in the Olympics and Paralympics. The NTT Group will continue to do its utmost to contribute to sports.