Send out Memories of A-Bomb Suffering to the World via Web Communities (August 25, 2011)

August this year saw the 66th anniversary of the end of World War II. The Great East Japan Earthquake and the Fukushima Daiichi Nuclear Power Plant accident, however, have made this summer quite different from usual years. Sixty-six years ago, atomic bombs brought catastrophic disaster to Hiroshima and Nagasaki, devastating each city in a moment, killing and injuring vast numbers of people, and, even now, afflicting many atomic bomb survivors, or hibakusha, with radiation damage. Fears of radiation damage attributable to the nuclear accident in March this year, and Japan’s rehabilitation efforts from the great earthquake and tsunami disaster, vividly remind us how Japan rebuilt itself from the atomic bomb disasters and the destruction of World War II.

On their A-bomb memorial days, August 6 and 9 respectively, Hiroshima and Nagasaki were filled with prayers. It is many years since Japan suffered atomic bombing; the number of hibakusha is dwindling and their average age is now over 75. As memories and direct experiences of the atomic bombing are fading, Mr. Hidenori Watanave, Associate Professor, Graduate School of System Design, Tokyo Metropolitan University, and others, set up on July 23, 2010, a committee to create a website "Nagasaki Archive." The committee came up with this project to send out to the world and pass on to future generations the memories of the atomic bombing, making much use of the most advanced digital technology including Google Earth, a digital globe, and Twitter, as it thought, “We have to keep the historical evidence.” On July 10 this year, it also opened a "Hiroshima Archive." 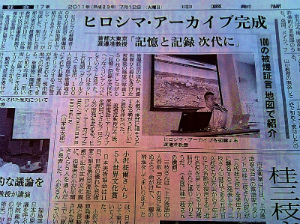 The Hiroshima Archive contains narratives and materials which were collected mainly by about 30 people including high-school and vocational school students in the city of Hiroshima, other materials provided by the Hiroshima Peace Memorial Museum and other institutions, and also Tweets from all over the world expressing the hope for nuclear abolition. The two archives produced a great response after their opening; the Hiroshima Archive recorded more than 75,000 page views, and the Nagasaki Archive more than 450,000. As the participants in this archive project include many people who have neither direct experience of the atomic bombings nor anything directly to do with them, the on-line Asahi Shimbun on April 28 introduced the Hiroshima Archive as a “new attempt for young people to take over the memories of the atomic bombing and send them out to the world.”

If you click the Hiroshima Archive, the picture of each hibakusha and his/her narrative appears on a three-dimensional map, showing you where he/she was at the time the bomb fell. You can also follow how Hiroshima has changed from the time of the bombing to the present through rehabilitation, as the past and present photos of Hiroshima are shown in a multilayered way. 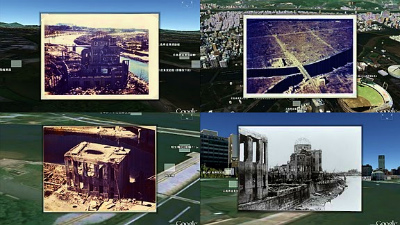 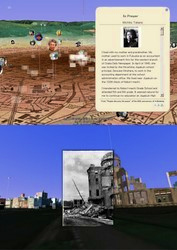 These two archives objectively let you know what actually happened and what evidence still remains in Hiroshima and Nagasaki. The archives will be continually built up over a long period of time collecting data. The narratives of surviving witnesses are very convincing. As the archives have English pages, they will surely make the most effective tool in this age of the Internet in disseminating the experiences of atomic bombing to the present and future people in the world and in enabling the younger generation to ponder upon war and learn about the atomic bombings once again.

The original purpose of the archives was to hand down the reality of the atomic bombings to the younger generations, but the Great East Japan Earthquake and tsunami, and the Fukushima nuclear accident, have changed the mission of the archives completely. The Hiroshima Archive committee says, “Our mission will be to learn about past tragedies, feel involved, and hand them down to future generations in our own words. We hope that our Archive will be used by many people.”

(You need to plug in to use Google Earth)