Since the Research Center for Nuclear Weapons Abolition, Nagasaki University (RECNA) was established in April 2012, they have continued efforts to estimate as accurately as possible the number, type and status of nuclear warheads held by states with nuclear weapons, in order to provide basic data to accurately grasp the state of nuclear weapons worldwide.  In August 2013, the results of these efforts were revealed on the RECNA homepage as “World’s Nuclear Warheads Count”, with updates made when the situation changes. 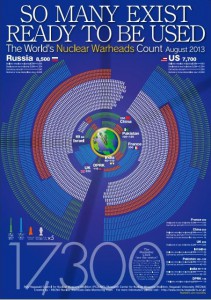 None of the countries that possess nuclear weapons have announced the precise number of nuclear weapons they have.  In light of this situation, research on estimating the actual number of nuclear weapons held by each state has been attempted by many research institutes and experts.  The results of this research have already led to announcements of numbers that are quite trustworthy, but the goal of this RECNA project is to apply recent information and progress of disarmament negotiations to these results, to find an even more precise number.  Considering recent development of nuclear warheads and the conditions surrounding them, the categories of strategic nuclear warhead and tactical nuclear warhead were not used, and instead they were categorized based on whether the nuclear warheads were deployed for immediate use or removed from missiles and submarines and put in storage, and by how they were used such as from land, from sky or from submarines.  This made it possible to display this information in a way that normal people without specialized knowledge about how nuclear warheads are used could understand.  Details on specific research methods used, data referenced and information sources are provided on the RECNA homepage.  (Currently Japanese only)  This information is also in the RECNA newsletter, which can be viewed from the homepage.

Another unique feature of this database is how the results are displayed.  With the goal of having more people interested in nuclear disarmament, the results are collected in a poster that shows at a glance the number, type and status of nuclear weapons held by each country.  By looking at this poster, the current state of nuclear weapons worldwide can be grasped easily.  This poster is available not only in Japanese, but also in English and Korean, with all three versions available to view or download for free from the RECNA homepage.  Since it is a poster, it can be displayed in a variety of places so more people see it.

Since this is an easy to understand visual representation of the state of nuclear warheads worldwide, it is also very useful as a teaching material for educating about peace or disarmament.  In Nagasaki City, in addition to the poster being distributed to city schools, a handbook was made for teachers and the RECNA is encouraging its use as a teaching material.

In order to reflect the most recent conditions and information as much as possible, the Nuclear Warheads Count will be updated and improved when necessary.  RECNA would like users to periodically check their homepage in order to understand the situation of nuclear weapons in the world.