The Valentine’s Day Phenomenon in Japan

Reported by an intern, Ayako Wasiliew

In Japan, February 14th is celebrated in the form of giving your loved ones some chocolate as a gift. Curious at hearing that there has been recently some change in the traditions and buying patterns of the people, we investigated the latest trends of this year’s Valentine’s Day. 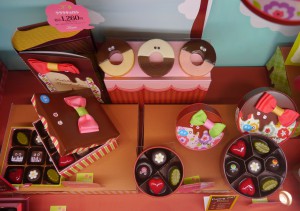 “I buy chocolates for my colleagues, family members and myself. And as my ‘Honmei (Favorite)-Chocolate’, I am giving self-made chocolates and some from the store as a Valentine’s gift,” says 20 year-old student Mizuki Nakajima, who seemed to be quite impressed by all the auspicious variety of chocolates in the department store. “I enjoy going to different shops and choosing some delicious chocolates. The ones I buy for myself are kind of a special treat for me,” she says.

The Japanese way of celebrating Valentine’s Day differs a lot from the western style where you give the person of your interest some flowers or send him/her a card. A lot of people in Japan used to confess their feelings to someone on the 14th February, but this habit has been replaced by a more casual way to enjoy Valentine’s Day. 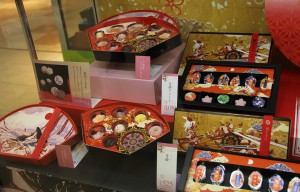 The usual “tradition” in Japan (men are given chocolate by women), seems to be not enough anymore; chocolates are also bought for friends (the so-called “Tomo-Chocolate”) or just as a special treat, which women buy for themselves (the so-called “My-Choco”). According to a survey of the high-end department store Printemps Ginza in Tokyo in which 360 persons took part, the average amount people want to invest in “My-Choco” beat the price the respondent would pay for “Honmei (Favorite)-Choco” (which is given to the person you want to express your deepest feelings to) for the first time in 10 years. The enterprise supposes that this result might be influenced by Abenomics - their theory says that female customers want to purchase more chocolate because of the rising economic wealth. 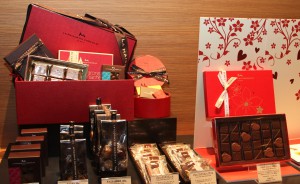 But not only women belong to the “My-Choco” consumers: more and more Japanese men, called “Amatou-Danshi” meaning “men who like sweets” are proud of having a sweet tooth and make no secret of buying themselves their own chocolate for Valentine’s Day. “Normally, our male clients buy a little box of 2-4 chocolate pieces for themselves,” confirms a sales assistant at a luxury chocolate brand shop.

Next to the “Honmei-Choco” which you give to your favorite person, there is the so called “Giri-Chocolate,” meaning literally “obligatory chocolate.” Although the translation of the expression seems to have a negative connotation and there are some people who really give chocolates out of courtesy to other people, more and more women enjoy planning little presents for their supervisors and colleagues, going to department stores with their female colleagues during lunch time to choose the best chocolate gifts for the 14th February.

Valentine’s Day in Japan is not only about “confessing your feelings to someone” or a “disagreeable duty” any more, it’s also a way to give little somethings to your fellow men and women out of pure friendship and appreciation. “The main statement chocolate is not really ‘I love you’, it’s more about saying ‘Thank you’ to all the people you care about,” says 20-years-old Takane Onda smiling, saying that she is really looking forward to this year’s Valentine’s Day.

<Some facts about Valentine’s Day in Japan>

The origin of the Japanese way of celebrating the 14th February has its roots in the time of Americanisation after the Second World War, when a confectionery advertised Valentine’s Day chocolate to foreigners who were living at the time in Japan. Japanese chocolate factories wanted to participate in this event too, but in the translated version of the commercial, people were told by mistake that women have the opportunity on Valentine’s Day to express their love to men by giving them chocolate.

The Valentine’s Day in Japan has its final big breakthrough in the 1970s when schoolgirls and office ladies started confessing their feelings to their crush and/ or co-worker with chocolates on February 14th each year.

One Month after Valentine’s Day, on the 14th of March, it’s the men’s turn to reciprocate: during the so-called “White Day” women are given presents, not only sweets but also in form of jewellery, bouquets of flowers and lingerie - often double or triple the price of the Valentine’s Day gift.

The Star of the Parisian Chocolaterie-Scene, Nicolas Cloiseau of La Maison du Chocolat, tells that he was surprised in a positive manner when he heard that chocolates are given as a present for Valentine’s Day in Japan. “In my opinion, men should buy more chocolates for their women” he says, laughing.

As a person who spent most of my life in Europe, I already heard about the way of celebrating Valentine’s Day in Japan, but I couldn’t imagine the impact it has on people every year.

It’s nearly impossible to miss all the colorful sales promotion in the supermarkets and the department stores. The magazines are filled with tips on how to make self-made chocolates, or the rankings of the most popular chocolate brands, and you can just feel in the air that the days around Valentine’s are something special in Japan - particularly for women.

What impressed me the most was the story of a spokesperson of Printemps Ginza: Japanese office ladies are organizing special meetings in their office to decide what kind of chocolates they want to give to their male co-workers and boss. “They go to department stores during their lunch break in a group, tasting different sorts of chocolate and discussing about which one to buy for their colleagues”, she told me during an interview.

Valentine’s Day in Japan is not only about giving some chocolate to your sweetheart, but a social event, strengthening the feeling of ”togetherness.”