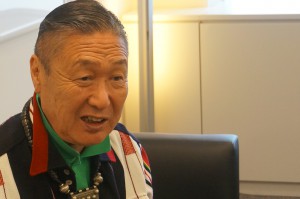 In 1971, Kansai Yamamoto became the first Japanese designer to hold a fashion show in London, at just 26. After his sensational debut with fashion fusing Japanese culture and avant-garde designs, he unveiled his collections in Paris, New York and Tokyo, establishing himself as a world-renowned designer.

Since the 1990s, Yamamoto concentrated on work as an event producer. He has held the “Kansai Super Show” in such countries as Russia, Vietnam, Turkey and China. In Japan, Yamamoto engineered “The Nippon Genki (Energize Japan) Project” using genki (energy, vigor) as a slogan. Genki—a term which can be used in physical, psychological and mental senses—is the subject of his events under the project.

The Foreign Press Center Japan interviewed Yamamoto—who is vigorously taking on new challenges at the age of 71—about his ventures on the world stage, as well as his feelings toward Japan. In the first installment of the three-part series of articles based on this interview, Yamamoto talked about his overseas activities.

Foreign Press Center (FPCJ): After your first show in London in 1971, you have showcased your work at Paris, New York and Tokyo collections.

Kansai Yamamoto: I did fashion shows until the end of the 1980s in Paris, New York and Tokyo, going around the globe twice a year to unveil my work.

When foreign people think of Japan, “wabi-sabi” (quality of austerity and serenity) often comes to their minds. My work, however, was not anything like that. My work was based on what people call “kabuku” or “basara”—the use of vivid colors and adventurousness found in the Azuchi-Momoyama period (1568-1600) of Oda Nobunaga and Toyotomi Hideyoshi.

In addition, in kabuki, there are ways to instantly change the colors of costumes, called “hikinuki” and “bukkaeri” (both costume-changing methods involve two costumes stitched together, with the underneath garment appearing as the thread is removed). In London, I clearly demonstrated “the reasons I should win (on the world stage)” by using these and other methods. Britons who saw them for the first time were astonished and deeply impressed.

When I held that first show in London, there was no distinction between a fashion show and a “super show” (a fusion of fashion, performances and music). My show, however, was a blend of an event and a fashion show. It was unique by any standard.

FPCJ: After establishing yourself as a successful designer, your focus has shifted to work as the event producer of the “Kansai Super Show” abroad. Could you tell me the motive and purpose behind starting such shows?

Kansai Yamamoto: People distinguish “events” from “fashion.” But they can’t be separated in substance. If I divert all my energy to something, they will automatically become fused. I started doing shows around 1990 and had my first success in 1993 when I orchestrated “Hello! Russia” (held in the Red Square in Moscow). I selected Russia because it was not very well-known among Japanese and because Japanese were not known by Russians. 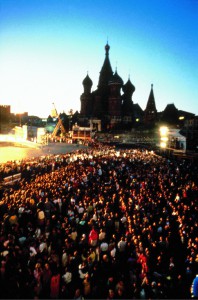 As Japan has a territorial dispute with Russia over the Northern Territories, dislike for Russia was prevailing among Japanese. Because of Japanese soldiers being detained in Siberia after World War II as well, Japanese held only negative images of Russia. I questioned if “Russia is a country with only negative factors” and went there to see it for myself. That was my motivation to organize the event. I also wanted to show what we were thinking about. The biggest goal was to generate cultural exchange between the two peoples. [Photo: “HELLO!  RUSSIA” held in the Red Square in Moscow in 1993 (provided courtesy of KANSAI YAMAMOTO, Inc.)]

FPCJ: Your next major overseas event was held in Vietnam in 1995.

Kansai Yamamoto: I still remember it vividly. Before the show was held, I conducted extensive research on Vietnam, which raised some questions, such as “why did Vietnam eventually beat America, a military super power?” As I associated with Vietnam people, the answers became clear to me. I am a person with a strong desire to learn. I visited various places, including Ho Chi Minh, Hanoi and Hue. During my visit, I watched Vietnamese girls working on embroidery of kimono called “tomesode,” which is worn by Japanese women on happy occasions. They were doing embroidery freely—virtually without the help of samples. I though to myself, “Their skills are by no means inferior to those of Japanese.” 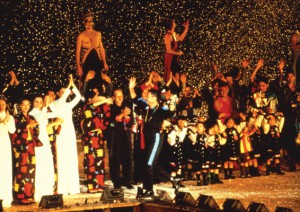 We held the show at a pond where fish was cultivated. There is a story called “Minami no Shima ni Yuki ga Furu (Snow falls on a Southern Island)” (A war memoir by actor Daisuke Kato. The story is about an entertainment division created for Japanese soldiers). We wanted to imitate the story and make “snow” fall. If we made snow out of paper, it would cause harm to the fish. But we desperately wanted to do it. After conducting extensive research, we decided to use rice paper, an ingredient of spring rolls. They gracefully fluttered in the air and became feed after falling into the pond. We even studied such things as how much rice paper we should use to benefit the fish. [Photo: “HELLO! VIETNAM” held in 1995 (provided courtesy of KANSAI YAMAMOTO, Inc.)]

FPCJ: Your activities in Vietnam were not confined to only holding an event.

Kansai Yamamoto: I wanted to contribute to the country more than holding just one show. I wanted to give a fashion school as a gift. Eventually, however, I donated the largest amount I could to an art college in Hanoi to create a fashion course. The course now receives applications for more than 100 times its capacity, and I hear the success rate of its graduates is impressively high. Once, I went to its graduation ceremony with NHK staff, which was filmed for a program called “Sekai Waga Kokoro no Tabi (My soul journey to the world)” (aired in 2001).

To be continued in the second installment.

Born in 1944, Kansai Yamamoto is a world-renowned designer and producer. He has received numerous awards, including the Fashion Editors Club Award, the Jury’s Special Award at the 7th Japan Event Award, the International Award at the 7th Tokyo Creation Award, the Good Design Award and the Blue Ribbon Award. He is a founding board member of the Tokyo Fashion Designer Committee and an Overseas Advisor to the Russia International Human Aid Foundation. He has authored many books, including “Ue wo Muite (Looking Up)” (Shodensha Co., 2012) and “Atsuki Kokoro (Passionate Heart)” (PHP Shinsho, 2008).