Did you know that when the first atomic bombing in human history occurred 70 years ago on August 6 in Hiroshima, in addition to the countless Japanese lives lost, 12 American soldiers also died in the bombing? The names of these twelve are listed at the Memorial Cenotaph in the Hiroshima Peace Memorial Park, along with those of the others who died from the atomic bomb, where the citizens of Hiroshima and Japan pay their respects to the dead. At the nearby Hiroshima National Peace Memorial Hall for the Atomic Bomb Victims, photographs of the 12 are on display. During the chaos at the time, many bodies were cremated in piles, and it was not possible to tell who the remains belonged to. The remains of the American soldiers were interred along with those of unknown Japanese victims at the Atomic Bomb Memorial Mound in the park.

Aside from citizens of Hiroshima, in both Japan and the US generally only specialists or researchers will be aware of this fact. At the time, the American government did not want to publicize the fact that American soldiers were killed by an American atomic bomb, so the Japanese government could not announce it either while under the control of the GHQ after losing the war.

From 9 to 12 days before the atomic bombing, American forces were using B-24s to bomb the strategic naval center of Etajima and the military harbor at Kure, both in Hiroshima Prefecture. While the bombing runs caused serious damage, five bombers were shot down by Japanese anti-aircraft guns, and a total of 15 American pilots and gunners bailed out with parachutes, after which they were recovered by farmers and fishermen and handed over to the Japanese Army. Of these 15, Thomas Cartwright, pilot of the B-24 Lonesome Lady, and two others were brought to Tokyo for questioning, with the rest held in Japanese military facilities around Hiroshima Castle, near the epicenter of the atomic blast. Then the atomic bomb was dropped, with some of them dying instantly, others trying to escape despite severe wounds and collapsing at the atomic bomb aiming point Aioi Bridge, and some who died the next day. Two of the American soldiers received treatment at military hospitals, but died on August 19. Since their names and remains could be matched, their remains were returned to their families in the US the next year. Among the countless grave markers made at the time, two for American soldiers were confirmed, likely made by citizens of Hiroshima. At the time, bodies were overflowing along the streets and rivers, with the identities of most unknown, and so the remaining American soldiers were cremated along with Japanese victims and interred in the Atomic Bomb Memorial Mound.

In 1977, a Hiroshima researcher discovered these facts from diplomatic documents. The names of the 12 American soldiers that were confirmed were added to the list of the dead at the cenotaph. In the US, a university professor questioned the Department of Defense in 1983 and first brought some of the truth to light. Neither the Japanese nor American governments have made official announcements on this matter.

For the first time, the deaths of the American prisoners in the atomic bombing were mentioned in the Peace Declaration made by Hiroshima Mayor Kazumi Matsui on August 6 this year: “By year’s end, 140,000 irreplaceable lives had been taken, that number including ... American prisoners of war.” Near the end of the declaration, the mayor also expressed his desire for President Obama to visit Hiroshima: “The summit meeting to be held in Japan’s Ise-Shima next year and the foreign ministers’ meeting to be held in Hiroshima prior to that summit are perfect opportunities to deliver a message about the abolition of nuclear weapons. President Obama and other policymakers, please come to the A-bombed cities ... and encounter the reality of the atomic bombings.” 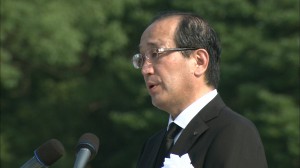 Mr. Matsui gave a press conference at the Foreign Correspondents’ Club of Japan in July, where he was asked whether he would like U.S. Secretary of State John Kerry to apologize for the atomic bombing during the G7 foreign minister’s meeting to be held April next year in Hiroshima. The mayor responded that whether they apologize or not should not be made into an issue. Hiroshima A-bomb Survivors’ Association President Sunao Tsuboi (90) has also said “Putting the hurdle of an apology in front of President Obama is not the shortest path to abolition of nuclear weapons. Atomic bomb survivors truly want him to visit Hiroshima.” For the past two years, Hiroshima TV has been running the Letters to Obama campaign, and in May of last year they sent 72 letters to White House officials. In addition to the aforementioned two, there were letters written by governors, members of economic organizations, university professors, professional baseball team owners, atomic bomb survivors, students and housewives. As is the consensus in Hiroshima, they were not seeking an apology for the atomic bombing. What the people of Hiroshima want is a future-oriented visit to the site of the atomic bombings, a presentation of flowers to the cenotaph in the Peace Memorial Park which also commemorates American soldiers, and a message to the world supporting further nuclear disarmament, in order to move the world even a little closer to being a world without nuclear weapons.

Russian President Putin kept the West in check by saying he considered the use of nuclear weapons in Ukraine. Along with China’s continual military expansion and North Korea’s nuclear weapons program, the international situation is becoming more and more severe. An American science journal warned that there was only two minutes left until nuclear global destruction during the Cuban missile crisis. The clock moved back to 17 minutes left with the end of the Cold War, but now it is back to only three minutes left. I understand the difficulty of moving towards the abolition of nuclear weapons in this situation. But it terrifies me to think what would happen if nuclear weapons passed into the hands of terrorists outside the bounds of national governance. This is no doubt a common concern of all nuclear-weapon states.

During his speech in Prague in April 2009, President Obama spoke about a “world without nuclear weapons.” Hiroshima welcomed this statement more than anywhere else in the world. Our hopes increased even further with his June 2013 speech at the Brandenburg Gate in Berlin, where the Berlin Wall had been during the Cold War, when he spoke about reducing strategic nuclear weapons.

After visiting Hiroshima in 2011, Boston Globe Editorial Page Editor Peter Canellos*, wrote that “the White House seem to have misunderstood the nature of this invitation, as I did.... In Hiroshima, both elderly survivors and schoolchildren made the same points: No apology is requested.... If Obama wants to send a strong message about the dangers of nuclear proliferation, he should go to Hiroshima.” 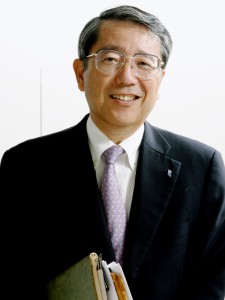 President Obama has said himself that he would be “honored” to visit Hiroshima. In Prague, he even said “as the only nuclear power to have used a nuclear weapon, the United States has a moral responsibility to act.” In the final year of his term next year, I would like him to present a more concrete version of this speech in Hiroshima. This could even become the president’s legacy. Atomic bomb survivors are now an average of 80.13 years old. There is not much time left.

Hiroshima is already a sister city with Honolulu, where the attack on Pearl Harbor occurred, and there has already been reconciliation at the civilian level. The citizens of Hiroshima are waiting with open arms for President Obama to visit.

Worked as Washington correspondent and political editor for Yomiuri Shimbun.