With the Nuclear Security Summit starting on March 24 (The Hague, Netherlands), the Non-proliferation and Disarmament Initiative (Hiroshima City) from April 11 and President Obama’s visit to Japan from April 22, we had President Miyama of  Hiroshima Television Corporation write about his company’s efforts to invite President Obama to Hiroshima to promote a nuclear-free world.

The Message from Hiroshima Contained in “Letters to Obama” 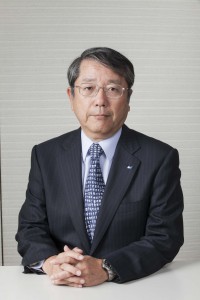 Hiroshima is the first time in history that humanity faced the horror of the atomic bomb.  Now, Hiroshima is sending out their message of nuclear disarmament and nuclear abolition.  At the end of last year, the mayors of Hiroshima and Nagasaki, both sites hit by nuclear bombs, met with the recently appointed United States Ambassador to Japan, Caroline Kennedy, and requested that President Obama visit the bomb sites during his presidential term (until January 2017).  The Ambassador replied that if a direct invitation was sent, the President would definitely consider it.  The Ambassador discussed how when she visited Hiroshima at the age of 20, it affected her deeply.  Understanding the true meaning behind President Obama’s push for a nuclear-free world, the two mayors immediately sent a jointly signed letter to the President, requesting that he visit the bomb sites and see for himself what effects the bombs had.  They mentioned they would welcome his visit with a future-oriented attitude, and did not request an apology for dropping the bombs.  Hiroshima City Mayor Kazumi Matsui is a second-generation hibakusha (atom bomb survivor), but he explained that “Having the President express his resolve for nuclear abolishment from a bomb site would make up for the past and lead towards a nuclear-free world, more than an apology would”.

At the beginning of this year, local television station Hiroshima Television Corporation started the “Letters to Obama” campaign.  The campaign involves collecting letters from a range of viewers asking President Obama to visit Hiroshima, and sending these grassroots messages to the White House.

Over ten million origami cranes are sent to the HiroshimaPeaceMemorial Park every year from around the world.  They are physical representations of prayers for peace.  Sadako Sasaki, who passed away from radiation sickness at the age of twelve, folded origami cranes in her sick bed as she prayed for recovery.  This crane folding spread naturally, and now there is the Children’s PeaceMonument in the PeacePark to commemorate Sadako and her cranes.

However, there are so many cranes sent that HiroshimaCity is actually having problems storing them.  Two years ago, the “Piece for Peace” project was started as the central project for  Hiroshima Television Corporation’s 50th anniversary.  With permission from the city, the origami cranes were used to make recycled paper and then local Hiroshima brushes were used to write a single character encompassing a wish for peace on this paper.  These works were exhibited and televised, a television series was started based on them and a picture book was published, revitalizing the feelings put into the cranes.  There was an extraordinary response, with 18,000 pieces sent from both Japan and overseas.  Therefore, we at Hiroshima Television Corporation, decided “Instead of just a 50th anniversary project, let’s make this the basic philosophy of Hiroshima Television Corporation”, and so the project continued.

This led to the “Letters to Obama”.  “President Barack Obama, Please pay a visit to Hiroshima” was printed on recycled paper from the origami cranes, and messages to President Obama were collected from a variety of viewers such as governors, mayors, hibakusha, students, housewives, and company workers.

A key point is that none of the letters are asking for an apology for dropping the atomic bomb.  Chairman Sunao Tsuboi of the Japan Confederation of A- and H-Bomb Sufferers Organizations wrote “Mr. Obama, you have the power to save humanity.  I earnestly await your visit”, and commented as follows, “I would like Mr. Obama to make an appeal for nuclear abolishment from Hiroshima”.  Previously, he has explained the thoughts of hibakusha by saying that “Adding the hurdle of an apology is not a shortcut to nuclear abolishment.  Hibakusha have made a bitter decision, but sincerely hope for a visit to Hiroshima”.

That’s right.  There is something I would like to say to Americans, in particular to conservatives.  Don’t misunderstand.  Look at this article that Peter Canellos, editorial page editor at the Boston Globe (*), wrote after visiting Hiroshima. “I did as well, but the White House seems to have misunderstood the reason Hiroshima citizens want the President to visit Hiroshima. In Hiroshima, both elderly survivors and schoolchildren made the same points: No apology is requested.  A visit to Hiroshima by Obama would, of course, prompt some blowback at home, but a sitting president going to Hiroshima would make the visit a worldwide event.  People have been waiting since his Nobel Prize address for the President to take action.  If Obama wants to send a strong message about the dangers of nuclear proliferation, he should go to Hiroshima.”

The political schedule for nuclear issues is quite busy.  Starting March 24 in The Hague in the Netherlands, there is the Nuclear Security Summit, with President Obama and other heads of state participating.  From April 11, the foreign ministers of 12 non-nuclear states will gather in Hiroshima for the Non-proliferation and Disarmament Initiative (NPDI).  Then from April 22, President Obama will visit Japan as part of an Asian trip.  On April 28th, the Preparatory Committee for the 2015 Nuclear Non-Proliferation Treaty Review Conference will be held at UN headquarters, with the governor, mayor and hibakusha groups participating from Hiroshima.  The NPT Review Conference that is held once every 5 years will be next year, and it will also be the 70th anniversary of dropping the bomb and the end of World War II in the Pacific.  The year after that, the G8 summit will be held in Japan.  President Obama will have to return to Japan once more.  There are midterm elections this fall, and considering internal American politics the people of Hiroshima are aware that it may be difficult for the President to visit Hiroshima.

The people of Hiroshima feel strongly that President Obama can visit the bomb sites next year on the 70th anniversary of the bombing, or the year after that during the G8 in Japan, when he is near the end of his term and faces less political risk.

The reason the people of Hiroshima are not set on receiving an apology and are looking towards the future, and the reason Hiroshima Television is collecting “Letters to Obama” from normal citizens is all in order to create an environment where it is easy for President Obama to visit Hiroshima.  The first wave of “Letters to Obama” are planned to be sent to the White House in the near future.  The purpose of these letters is to communicate to Washington the true, future-focused public opinion of Hiroshima.  Of course, considering that after becoming president in 2009 President Obama made his speech about a nuclear-free world in the Czech Republic, homeland of Jan Letzel, the designer for the Atomic Bomb Dome, and received the Nobel Peace Prize, we would like to help make any progress possible.

Worked as Washington correspondent and political editor for Yomiuri Shimbun.