Mr. Toshihiko Uji (76) held positions as the vice chief of the political desk, chief of the economics desk, and lead editorial commentator at the Tokyo head office of the Chunichi Shimbun/Tokyo Shimbun, covering changes in Japan over half a century.  We asked him about the establishment of the Foreign Press Center and dispatching information overseas.

- The Foreign Press Center (FPCJ) was established in 1976. Tell us what led up to the establishmen 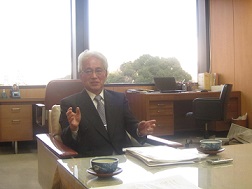 With the advance of globalization, foreign journalists were coming to report on Japan more frequently, and a system to support them was necessary. With the opinion that newspaper and television reporting should be independent from the government, and the fact that the The Foreign Correspondents' Club of Japan (FCCJ) had already been established, we decided to establish the FPCJ as a private organization. Some time after establishing the FPCJ, there were complaints from overseas that Japan's press club system was insular, and there were requests from the American media (news services) to become official members of the Japan National Press Club. There are some media organizations that are government run or nearly so around the world, including some with strong political leanings, and there were conditions on Japanese media joining the club, so a compromise had to be made. So a measure was put in place where media organizations that were recommended by the FCCJ and FPCJ could join. There are still complaints about the Japanese press club system, but since the 1980s it has been possible for foreign media to join if they follow the procedure.

~ Respond Quickly and Thoroughly, Making an Effort to be Understood ~

- What is necessary to ensure Japan is not misunderstood overseas?

For a long time Japan was focused on the USA, with prime ministers visiting America during the long May break for a period in the 1970s and 80s, with a lot of effort put into dealing with trade friction with America in the 1990s. Due to this focus on America, there is insufficient awareness of globalization, and financial experts in particular have to change their thinking. When it was pointed out that German cars were more expensive than their Japanese counterparts, the Germans stated that "The prices of our cars reflect the recycling costs of environmentally friendly parts used in them." This kind of give and take at meetings and during negotiations should be studied. After the accident at Fukushima Daiichi Nuclear Power Plant in 2011, the Tokyo Electric Power Company had an English interpreter present for foreign media at their press conference, but the documents handed out at the press conference did not have an English version available until 2 days later. Overall, people dispatching information fail to understand it sufficiently, and there are less people who can make high quality statements with political philosophy behind them. For a thorough and rapid response, it seems there is a need to create a support system.

- Were there any politicians that dispatched information overseas from Japan?

Politicians such as former prime ministers Mr. Masayoshi Ohira and Mr. Toshiki Kaifu and former minister of foreign affairs Mr. Sunao Sonoda had overseas connections, and were active in dispatching information. Although Japan has released messages when necessary for politics and diplomacy, there was no real concept of carrying out public relations on a daily basis. The activities of the FPCJ are also more focused on accepting foreign journalists than on dispatching information. I feel that the movement to actively dispatch information from Japan is relatively recent.

First we have to make friends, and dispatch information to those friends. Recently there have been Japanese companies and groups closing their overseas offices, choosing to shut themselves off from exchanging and dispatching information. On Human Rights Day in December 2013, authors from over 80 countries worldwide, including Nobel Prize winning authors, protested the monitoring of personal information by governments and companies, and had a petition to create new privacy protection relevant in the Internet age. An Austrian journalist I know sent me an email about it, and so we introduced this movement in the Tokyo Shimbun and had a campaign for it. This is a good example of how information spreads through personal connections. I myself am a board member of the International Press Institute (IPI), working to dispatch information to other members about the debates over the Act on Protection of Specified Secrets. When information is cut off, the lack of information isolates people. It is necessary to make the effort to make more friends. 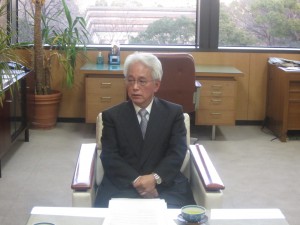 - It is said that the diversification of media is leading to the decline of the newspaper industry.

In Japan, each newspaper is creating their own identity, such as the Nikkei putting effort into the Internet as well as its paper in an effort to become a comprehensive information source, or the Asahi Shimbun focusing on investigative journalism. Focus is also being placed on training journalists. The identity of the Chunichi Shimbun/Tokyo Shimbun is reporting from a citizen's perspective, protecting the peace constitution, phasing out nuclear power, and emphasizing relationships with local communities. Each paper is working on how it dispatches information, and moving towards diversification. I believe that paper newspapers, with a variety of information available in them, will remain stable until the generation reading them becomes super-aged.

- What advice do you have for the Foreign Press Center?

I would like you to introduce Japanese values and its cutting edge technology. For example, the culture of cleanliness. Over 70% of Japanese households have toilets with warm water bidets installed, and they are also installed in public washrooms and on the Shinkansen. The 'Galapagos syndrome' of Japanese mobile phones was criticized, but it led to unique specifications for hygiene and environmental friendliness. In addition to warm water bidets, there is other excellent technology such as air and water purifiers that I would like to see introduced.

Born in 1937 in Osaka. After graduating from Waseda University, joined Chunichi Shimbun/Tokyo Shimbun. Held positions as vice chief of the political desk, chief of the economics desk, vice chief of the editing office and lead editorial commentator at the Tokyo head office, before holding positions as director, managing director and executive director (Tokyo Shimbun representative). Currently advisor for Tokyo Shimbun and Chunichi Shimbun. In addition to his current work, he is the international chairman of the Japan Newspaper Publishers & Editors Association and the Japanese representative board member of the International Press Institute (IPI).