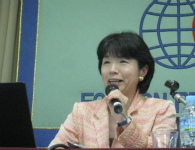 FPCJ invited Professor Hiroko Ota of the National Graduate Institute of Policy Studies to share her views about the road map toward the recovery of the Japanese economy. She served as State Minister in Charge of Economic and Fiscal Policy under Prime Ministers Shinzo Abe and Yasuo Fukuda. Forty five attendees included 14 foreign journalists, embassy representatives and FPCJ supporting members.

At the outset, Professor Ota said, “How Japan will recover from this disaster is so important that the whole of the Japanese economy depends on it. The Japanese economy had many and various problems even before the disaster. These problems cannot be overcome by simply restoring the disaster areas to what they were. For rehabilitation we need such a bold concept of making the recovery of these areas a breakthrough to Japan’s economic growth.”

Referring to the great disaster’s influence on the Japanese economy, Professor Ota explained the government’s estimates as follows:
(1) “Stock damage (assets lost from Japan by the disaster)” will be 16-25 trillion yen.
(2) “Flow,” which comes out as changes in GDP, will be negative 1.4-2.5 trillion yen in this fiscal year, with the combined influences of the reduced production of the disaster-hit areas and the damage to the supply-chain in other areas.
(3) Demand for reconstruction, on the other hand, will increase the GDP by 2.4-6.4 trillion yen throughout this fiscal year.
At the same time, these figures do not include such influences as the power shortage caused by the Fukushima Daiichi Nuclear Power Plant, and, also harmful rumors. As these influences are still vague and the longer they go on, the greater the after-effects will be, Professor Ota said, the nuclear accident should be brought under control as soon as possible.

Professor Ota said that the government’s poor handling of the economic crises in the 1990s caused Japan’s long economic recession. She pointed out that the present government should reflect on those mistakes and recognize the following three points as the three steps to be taken by the government in this crisis:
(1) Economic (stimulus) measures require three Ts --- timely, targeted and temporary.
(2) Fiscal policies and financial policies should be coordinated.
(3) Together with short-term demand-spurring measures, mid-term economic structural reform is needed.
From the viewpoint of making reconstruction a jumping-off point leading to new economic growth, Professor Ota stressed that mid-term economic structural reform was especially important and urged that the Reconstruction Design Council, which is responsible for the blueprint for reconstruction, should draw up a grand design crossing the boundaries of local governments or between the government and prefectures, and work on drastic institutional reform by designating the disaster areas as “special economic zones” in such industrial fields as fisheries, agriculture and medical care.

Given the above, Professor Ota mentioned the following four points as important issues to be addressed for reconstruction.
(1) The weakness of the Japanese economy lies in sluggish globalization, low productivity in the service industry and an inflexible labor market. The government should, Ms. Ota said, turn its reconstruction efforts to a first step to remedy the weakness of the Japanese economy by, for example, reorganizing agriculture into an industry that can stand internationalization, and activating the service industry by promoting population accumulation.
(2) It is important to increase Japan’s attractiveness as an economic base to prevent industries from going abroad. Japan should not slow down its participation in TPP negotiations, and corporate taxes should be reduced. Facing economic globalization squarely and proceeding with domestic structural reform are the only ways in which Japan can survive.
(3) The power shortage in the Metropolitan area caused by the disaster was amplified by Japan’s rigid power market where ten power companies have a monopoly on local power generation and transmission. When the nuclear accident is under control, overall reform of the power market will be necessary; reviewing the nuclear power stations and discussing the responsibility of the Tokyo Electric Power Company will not be enough.
(4) Reconstruction will require financial resources. Besides the costs necessary for reconstruction, the deficit in the primary balance should be halved by FY2015. It is also necessary to clarify a vision for fiscal consolidation including the reform of the social security system.

Professor Ota ended her lecture saying, “The tasks that should be tackled to get through the disaster are directly connected with the Japanese economy. The disaster put the starting point further behind, but if we could tackle reconstruction with a sense of crisis, we would be able take a first step toward growth after a long recession.”

In the Q & A session, the outlook for realizing Japan’s structural reform, a review of the manifesto of the Democratic Party of Japan for securing reconstruction funds, and other matters were taken up.