One year after the Great East Japan Earthquake, there are gradual moves toward reconstruction of people’s lives and communities in the disaster-afflicted areas. The press tour to Miyagi coastal areas, co-organized with OISCA and Kogakuin University, was attended by 20 journalists from media organizations from China, Korea, Taiwan, Singapore, Vietnam, Bangladesh, France, Spain, United Kingdom, Italy, EU, and Canada. 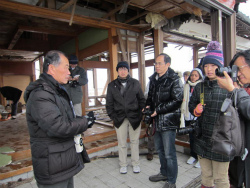 On the first day, the tour covered the Seashore Forest Restoration Project in Natori City, organized mainly by OISCA. The tour participants walked in snow around the coastal area where the fallen seashore forest still remains untouched. Mr. Tadashi Watanabe, OISCA’s Vice Chairman of the Board, Mr. Kunihiro Seido, OISCA’s Technical Adviser of Forestry, and Mr. Eiji Suzuki, Chairman of the Association for Disaster Recovery in Natori City East Region, explained the importance of the coastal forest and their strong hope to restore the forest. Then the journalists visited the remains of Mr. Suzuki’s house, which stands only a few hundred meters away from the sea and barely retains its original form. Mr. Suzuki talked about what happened when the tsunami attacked the area, and said that he wanted to keep his uninhabitable house as a memorial of the tsunami, to be passed down from generation to generation. The tour participants also interviewed Mr. Kiyoshi Mori, a farmer who evacuated from the coastal area to inland, on his thoughts about the reconstruction of agriculture. Mr. Mori is now trying to continue farming in greenhouses and also to raise seedlings for the coastal forest. 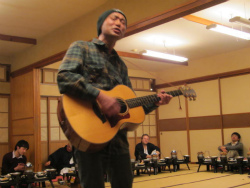 In the late afternoon, the tour participants moved to Ishinomaki City and stayed overnight at Oiwake Onsen, which provided local people with necessary assistance as a shelter for half a year after the earthquake. After the dinner, Mr. Soichi Yokoyama, the owner of the inn, explained how they accepted the evacuees and what happened until they resumed business. His old friend Mr. Shuji Shibuya, an architectural designer who designed the Oiwake Onsen building, played some songs which he had composed with the strong hope for the rehabilitation of his hometown. They also said with passion that people in Tohoku have a spiritual strength to endure hardships, and they wish to have a hope that the world will have a better future, not wasting the sacrifice of the earthquake. 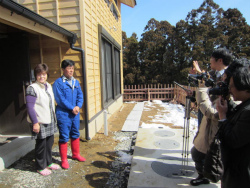 The second day was blessed with sunshine, and in the morning the journalists covered the Shirahama Reconstruction House Project in Kitakami Town, Ishinomaki City, which is organized mainly by Kogakuin University. They were given a briefing by Mr. Shinichi Sekiya, a visiting researcher of the university who is in charge of designing the reconstruction houses, on the costs and other details of the project, which has been suggested as an alternative to temporary housing. They also interviewed Mr. Katsuya Sasaki, who has started to live in one of the houses. As a fisherman, he described the tense situation under which he escaped from the tsunami to offshore in a fishing boat and spent the freezing night in anxiety about his family. He also asked the journalists to tell people in their countries that he is grateful for the support from all over the world and is now doing fine and trying hard to restore his life. The journalists visited a fishing port where Mr. Sasaki and his colleagues are working on wakame seaweed. At lunchtime, they interviewed Mr. Akio Kumagai, President, Kumagai Master Thatchers Co., Ltd., about the situations when the disaster occurred and the significance of the project. 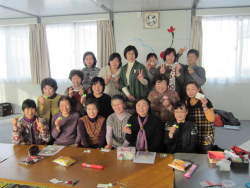 In the afternoon, the journalists visited a huge temporary housing complex in Kaisei district in Ishinomaki City to cover the EAST LOOP Project, in which 150 disaster-afflicted women are participating. Mr. Keita Watanabe, Secretary-General, NPO Ishinomaki Revival Support Network, which is taking care of the residents in the temporary housing complex, gave an outline of the largest temporary housing complex in Tohoku and the challenges they are facing now, including a community building. Ms. Tamae Takatsu, President of Fukuichi Co., Ltd., the organizer of the project, gave a briefing on how she started the project and its concept of bringing smiles and income to Tohoku women. Ms. Takatsu said that the hardships in the disaster-afflicted area are far from over, but she hopes that the handcraft work will be a moral support and the beginning of the next step forward in their difficult life. Then the journalists covered about 20 women from the groups in Ishinomaki City and Higashi-matsushima City knitting colorful heart brooches. They also interviewed the women living mainly in the temporary housing on what happened to them during the disaster, the life afterwards, and prospects for the future.