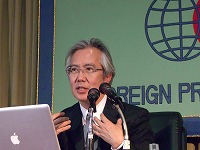 The gist of Dr. Nakagawa’s briefing is as follows:

“When we are exposed to radiation of more than 100 millisieverts, the risk of getting cancer will start getting a little higher. As of now, the hourly radiation detected in the Metropolitan Tokyo area is about one microsievert, or 0.001 millicievert, at the highest. In simple calculation, it would take 11 years of continuous exposure to that amount of radiation before it reaches 100 millisievert when radiation starts affecting health. Exposure to radiation over a long period has less effect on health than exposure in a short period. Outdoor radiation detected in areas close to the Fukushima Daiichi Nuclear Power Station was about 10-20 microsieverts per hour. It is then estimated that indoor radiation is about 1-2 microsieverts, which is almost the same level of the outdoor radiation in the Metropolitan Tokyo area. Therefore, you do not have to worry about your health at all.” “The follow-up studies of the Three Mile Island nuclear power plant accident in 1979 have revealed that residents in the vicinity did not suffer from any negative health impact.”