This press tour was planned and sponsored by the FPCJ to cover the recovery from the Great East Japan Earthquake on its fifth anniversary. The press tour focused on people putting efforts into rebuilding lives in two towns in Iwate prefecture’s costal area, Otsuchi and Taro. A total of 16 journalists participated from 9 countries: China, Taiwan, South Korea, Vietnam, Singapore, France, Italy, Germany, and the USA.

The tour began by filming and photographing Otsuchi town, where the ground level is being raised, from a hill, while journalists heard a description of 3.11 and the state of damage from Ms. Mio Kamitani from Oraga Otsuchi Yume Hiroba, an association mainly working on recovery tourism. Seeing the town with no buildings, a journalist questioned “Why is recovery not progressing much, although it has already been 5 years?”

At the former town hall, journalists received an explanation of how many town officials, including the mayor, perished there, and heard about future recovery plans. They asked Ms. Kamitani questions about the height of the raised ground, building levees, and dismantling the former town hall. 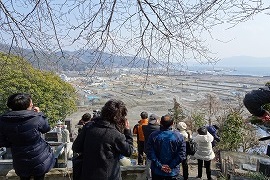 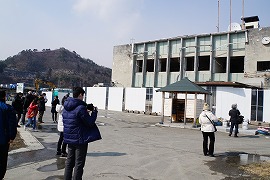 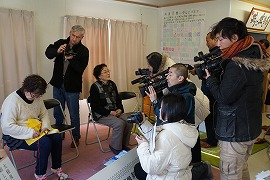 Journalists visited the Otsuchi Recovery Sashiko Project, which provides women affected by the disaster with work and a place to feel like they belong. Mr. Kazuya Yoshio, who started the project, introduced how he started the project providing work rather than supplying goods, and gave an example of how a local woman could buy a treat for her grandchild thanks to the project. Journalists interviewed local residents and asked about their current lives, how they felt about their participation in the project, and their outlook for their lives in the future.

To cover the temporary housing that many locals are still living in, journalists visited the second biggest temporary housing complex in Otsuchi. After the journalists filmed and photographed in the complex, lifestyle support advisors explained their work and how residents’ requests had changed. Journalists asked questions such as “What kind of trouble happens in temporary housing”, “At first temporary housing was supposed to be only for three years, but it has been extended to 5 years now. What is the plan,” and “Do you have a system to prevent kodokushi [lonely death]?” Residents were also interviewed and asked about their plans to rebuild their houses, with the increased cost of construction and shortage of workers. 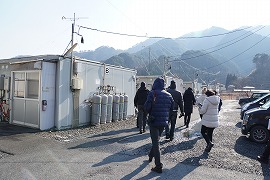 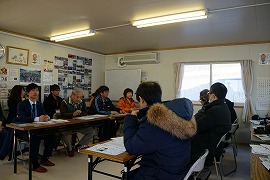 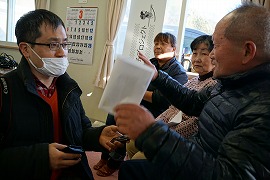 Journalists visited a municipal public housing complex, and interviewed residents who had moved from temporary housing. Journalists photographed and filmed in the complex while a town official explained about Ogaguchi Icchome Public Housing, where houses are available for family, single-person and elderly households. Lifestyle support advisors pointed out issues the complex’s residents have, such as noise and residents who feel like outsiders in the community. Journalists asked questions such as “How much is the rent”, “What kind of jobs do residents have,” and “Can people who were not affected by the disaster also live here?” While interviewing residents, they also asked about how their lives have been since the disaster and how their lives are in the public housing. 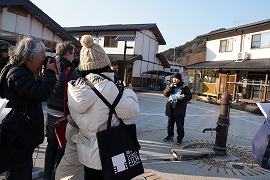 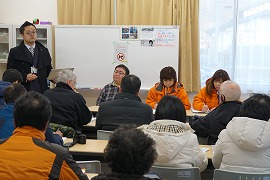 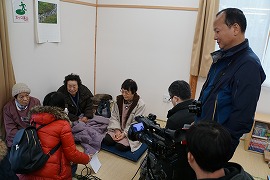 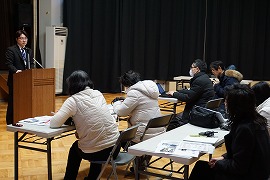 In the beginning, Mr. Shigeo Takahashi, head of the Otsuchi City General Policy Division, explained the state of damage in the town, situation of the recovery, and revisions to the recovery plan. When asked the reason for the delay in building disaster restoration housing, Mr. Takahashi said it took time to find the land owners of the construction sites, and described the complexities of the recovery process.

When asked about the lessons learned from the disaster, Mayor Kozo Hirano spoke about how during the disaster, when he was one of the staff working at the town hall, he saw his coworkers swept away in the tsunami, and speaking on his feelings toward the recovery, he said “It made me realize life is fleeting. I would like to rebuild the town focusing on hearts, not buildings.” The journalists also asked questions including “How have the residents’ opinions changed about the construction of levees now that 5 years have passed,” and “What was the reasoning behind your campaign promise to dismantle the old town hall?”

The tour visited the Collaborative School, which provides children with a space to study after school, and with mental and emotional care. Over 30% of the students in Otsuchi are still living in temporary housing, and the school was started with the goal of helping students overcome the trauma of the disaster through their studies, and nurturing them to become capable of supporting the town.

Third-year high school student Ms. Misato Maekawa told journalists “The Collaboration School gave me a place to belong when I didn’t feel like going to school, and it was fun participating in the My Project program to try to solve local issues.” When asked “What have you learned from experiencing the earthquake,” she replied solemnly “To value life, and value the present.” 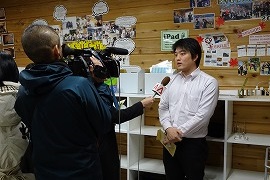 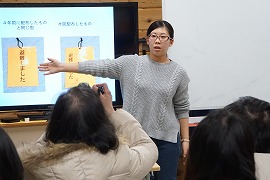 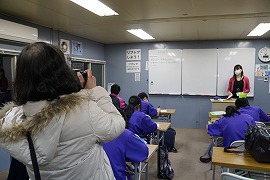 To learn about the recovery of the seafood processing industry, which was severely damaged by the tsunami, the tour covered the Domannaka Otsuchi Cooperative, made by a group of four companies. Mr. Katsutoshi Urata of Urata Shoten explained how the four companies came together and received various kinds of support to restart their business. Asked by one of the journalists “What do you think of the state of recovery now, with five years having passed,” Mr. Urata replied feelingly “We were a small business before the disaster, so I didn’t think it would be possible to reopen to this extent.” Mr. Masakazu Haga of Haga Sengyoten, the representative director of the Domannaka Otsuchi Cooperative, spoke about issues such as the cold storage not being rebuilt, which means a steady supply of food is not available. 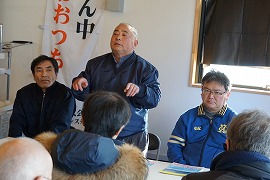 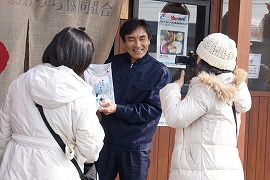 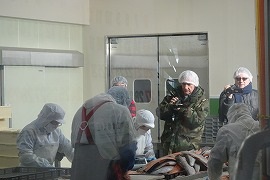 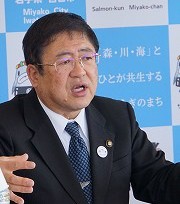 Mayor Masanori Yamamoto spoke about the damage from the disaster mainly around the Taro district of Miyako City, and the state of recovery. While pointing out that for each of the three major tsunami that have hit Taro over the past century, the number of victims has decreased significantly each time, he reconfirmed his commitment to disaster prevention by saying “It is important to keep trying until the number of victims is zero.” When asked by a journalist about what lessons were learned from the most recent disaster, the mayor replied “There is the possibility of being hit by a tsunami higher than the one in 2011. It is not enough to just rely on building levees and other infrastructure, constant training and vigilance are also required.” 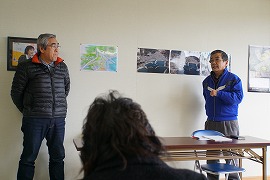 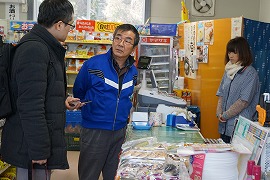 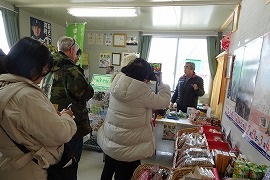 The tour visited the largest artificial plateau in Iwate Prefecture, prepared after the disaster, to cover the relocation of Taro district residents to higher ground. From an elevated view of the Sanno Danchi housing complex, a Miyako City official from the City Development section explained the city-building plan and gave an overview of Sanno Danchi. Mr. Washichi Tanaka, who the tour interviewed at Taro-chan House, has built his home in Sanno Danchi, and the journalists spoke with him about his decision to rebuild his life on higher ground. 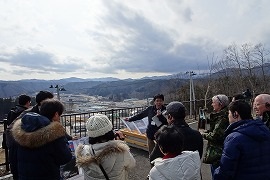 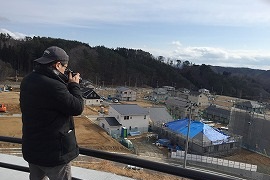 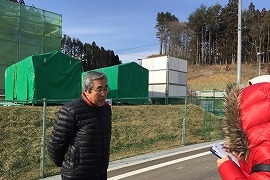 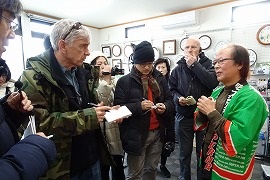 Mr. Shigeo Tsuda was the first store owner to leave Taro-chan House and rebuild his shop elsewhere, and the tour heard from him about the disaster and rebuilding his life outside of the main city area. When asked “Having experienced one tsunami, why did you decide to return to the same place,” Mr. Tsuda responded “I was assured that if another tsunami of that size came, the higher levees and raised ground mean it would be safe. Also, I like this place.” There were also questions about what things were like during the disaster, the current state of his business, and the safety of the levees. The journalists were also very interested in photographs by Mr. Tsuda’s father that showed the old town of Taro before and after the 1933 Sanriku earthquake.

The tour ended on top of the reinforced levee, with an explanation from Ms. Kumiko Motoda of the Miyako Tourism Cultural Exchange Association about the history of disaster and lessons learned from them. She spoke about the history of the old town of Taro, with the local people making the decision to live near the shore as a fishing town despite the repeated tsunami, and about what the situation was like at the time of the disaster five years ago. Ms. Motoda explained that “The purpose of the levees is not to stop tsunami,” and emphasized the importance of running as a lesson that has been learned in the Taro district. The tour ended with the journalists capturing images of the gradual recovery of the Taro district. 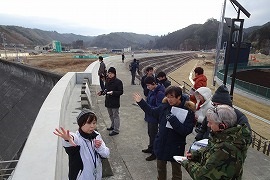 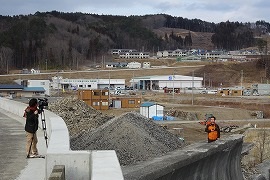