Since the Great East Japan Earthquake hit on March 11, 2011, FPCJ has been carrying out press tours to areas affected by the disaster.

This was the fourth tour to a devastated area and the destination was the coastal areas of Iwate. Journalists examined the state of reconstruction, for example, the life of the local people and industries such as fishery and agriculture. 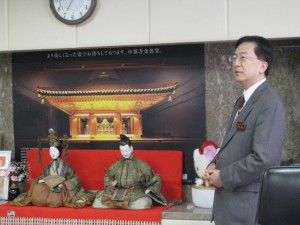 Using facts and figures, the Governor gave an account of the damage caused by the disaster and the progress of the reconstruction. From this April, the Full-fledged Reconstruction Period, the next phase of the prefecture’s Reconstruction Implementation Plan, will start. He explained the details of and obstacles to implementing the plan. 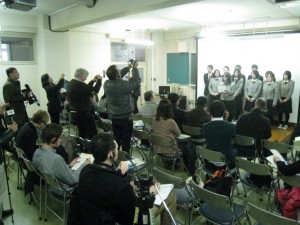 There were presentations by three groups of students.

One was by the students who visited the United States as a part of the Kizuna Project organized by the Japanese Ministry of Foreign Affairs. They made a presentation on the situation of the town then. Another was by the students making a proposal to the town mayor for the town development. The last was a student who visited Geneva, Switzerland, as a member of the  High School Student Peace Ambassadors. She talked about the feedback after she made a speech about the disaster.

There was a question by a journalist asking about their dreams for the future. Many students said that they want to study harder and becomepeople who can contribute to the town. 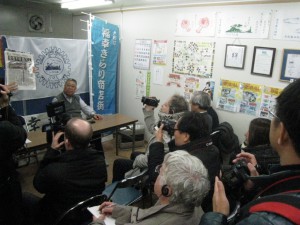 The group met Mr. Shigeru Yamazaki, Chairman of the Shopping District, who runs a boutique. He said that the big damage is the fact that he lost his customers. This happened because the disaster caused the local people to leave the town or split the communities. After his talk, the journalists split up and visited some shops in the district on their own and interviewed the owners. 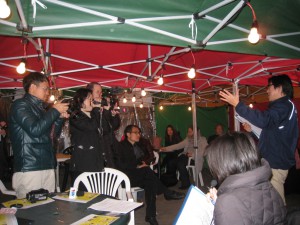 Given that a big shopping mall will open shortly neighbor to “Omachi Hohoemu Square”, where kitchen cars are stationed and operate, Mr. Manabu Ishikawa from the Kamaishi and Otsuchi Industrial Research Development and Training Center which supports the project said, “From now on, entrepreneurs have to run their business keeping in mind their competitiveness against other restaurants” indicating that the project is entering into a new phase. “However, our advantage is the original taste that the major restaurant chains don’t have” he continued with confidence. 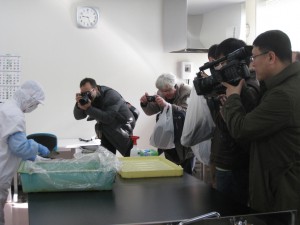 Mr. Akio Ono, President and CEO, looked back on the past and said, “The tsunami hit us but our employees and ingredients were safe. At that time, I found that if the production line was recovered, we could restart our operation.” “However, from a long-term perspective, I am concerned about lack of workforce.” The participants learned that the company shares the same problem that every devastated area faces.

Since the disaster, the company started to put efforts into direct sales to general consumers by teleshopping or e-commerce, which now accounts for almost half of the sales. The participants tried some products that customers all over Japan enjoy. “Very good!” Their chopsticks didn’t know when to stop. 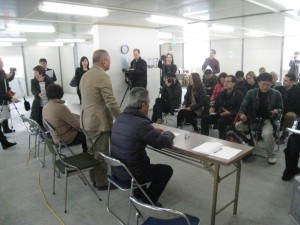 The journalists were welcomed by the residents as, “back then, support from abroad was very helpful. It is our pleasure to talk with you like this now.” The residents started to share their feelings: “When there is a problem to discuss, there is also a mood of giving up saying that it can’t be helped because this is temporary housing.” “I want to go back to the place where I used to run my business but I don’t know when I can realize that wish in the future. I am getting older and worrying about how my health will be in five years’ time.” “It is all about if you can think in a positive way and cheer yourself up.” The group also visited the support center of the complex. There, elderly people were exercising before their lunch. Journalists were enthusiastically filming or photographing the scene. 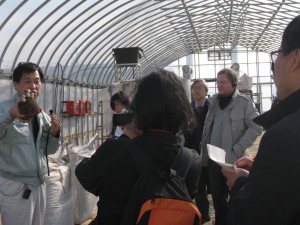 President Mr. Hirofumi Sato was already producing mushrooms before the disaster but

he reconstructed his business because he wanted to create employment. He succeeded in hiring more employees than before the disaster making the most of the character of the business, which is that people who don’t have experience in raising mushrooms can easily be involved in it. The company tries to “create news but not sparing money” and they are succeeding in catching the mass media’s eye. They are now preparing for selling their products abroad. 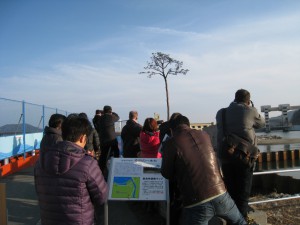 The group climbed up the earthquake memorial “Former Tapic 45” which was an information station. There was a red mark saying “13.7 meters” on the wall of the building showing the height the tsunami wave reached. Everybody was surprised at how high the wave was.

A representative from Rikuzentakta City explained the reconstruction plan of the city and the breakwater which will be newly installed. Surrounded by the large ongoing construction to raise the ground level and a white conveyer belt, the journalists moved to see the Miracle Pine. They looked up at the symbol of reconstruction which can be preserved, given that all the cost of the treatment for preservation was made possible by donations.