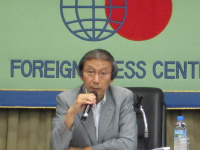 FPCJ invited Mr. Masakazu Toyoda, Chairman & CEO of the Institute of Energy Economics, Japan, to talk about short-, medium- and long-term energy-related challenges brought about by the Great East Japan Earthquake. Since its establishment in 1966, the institute has been making analyses and proposals about Japanese policies
related to energy and the environment.

Mr. Toyoda pointed out three short-term challenges caused by the Great East Japan Earthquake: 1) stabilization of the Fukushima Daiichi Nuclear Power Plant, 2) response to the electricity shortage, and 3) measures for supply /demand balance of oil and gas (as alternative fuels to nuclear power). Based on the performance in fiscal 2007, he explained that nuclear energy after the Fukushima NPP accident accounts for 25% of Japan’s total electricity supply on an installed capacity basis and 30% on a power generation basis. He also said if the presently shut-down reactors, as well as the reactors which would soon enter scheduled outages, did not resume operation, Japan would face great difficulty in securing sufficient supply of electricity and achieving its CO2 emission target, and a major increase of fuel costs caused by higher demands for oil and liquid natural gas (LNG).

For mid- and long-term challenges (or review of the Basic Energy Plan), Mr. Toyoda listed five important points: 1) recognizing that Japan has few energy resources and that an electricity supply network beyond borders like that of the EU is not available; 2) comprehensive studies are essential to resolve the challenges regarding security, global warming, costs and available reserves / energy density; 3) recognizing that there is no perfect energy source which can replace nuclear energy and that it is necessary to diversify energy sources and to promote technological development; 4) recognizing the importance of mixing safer nuclear energy, cheaper renewable energy and cleaner fossil fuels, and promoting energy conservation; and 5) recognizing that it is essential to internationally standardize the safety criteria and to share best practices through international cooperation for assuring the safety of nuclear energy and risk management.

In conclusion, Mr. Toyoda shared an image of energy policy review, providing his own view that Japan should keep the goal to raise the rate of zero-emission power sources to 70% in 2030. He pointed out the necessity of maximizing the proportion of renewable energy and further promoting energy conservation in homes and offices. Indicating the limitations of cleaner fossil fuels in the immediate future because of the high cost of CCS (Carbon Capture Storage), Mr. Toyoda also said that Japan would need a certain amount of nuclear energy, even if its proportion should be revised downward. He emphasized the importance of gaining people’s understanding of nuclear energy by ensuring safety and restoring confidence.