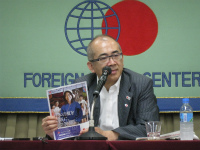 FPCJ invited Mr. Hiroshi Mizohata, Commissioner of the Japan Tourism Agency (JTA), after his first briefing in February, to talk about various policies to activate tourism, which had declined rapidly after the Great East Japan Earthquake, and to promote the recovery of Japan. A total of 26 people including foreign journalists (14 reporters from 10 countries/region), embassy representatives, and FPCJ supporting members attended.

At the beginning, Mr. Mizohata explained the background and significance of the fact that the Japanese Government regards "tourism" as one of its priority strategy fields; "taking the external demand and activating the domestic demand" is important to revitalize the Japanese economy as Japan’s population decreases. He said that Japan has expanded its market focusing on "monozukuri (creating good products)," but from now on, the export of the service industry (soft power) will become important in the future, and especially the tourism field, which has a major impact on the overall economy, will be the trump card to revitalize the Japanese economy at a time when the birthrate has been declining and the population is aging. He said that Japan’s share of foreign tourists is still behind that of other countries in Asia where they have developed tourism as a growth strategy. He stated he wants to expand Japan’s market share in future.

Mr. Mizohata next talked about the situation of the tourist industry after the Great East Japan Earthquake. He emphasized that Japan in general has recovered, though the rolling blackouts, and the nuclear accident in addition to the earthquake and tsunami, caused great damage to the “secure and safe” image of sightseeing and that the tourism will have a tremendous positive effect on Japan’s recovery. He said the JTA is promoting tourism aggressively with the slogan, “Enjoy Japan’s summer, travel with a smile” in this summer, too.

Then, about the domestic tourism, JTA took the initiative and started a campaign to urge a halt to the “self-restraint” policy and a return to recreational travel. He said that, as a result of encouraging travel to the places outside the stricken areas, the amount of consumption and the number of hotel guests recovered more than expected during the Golden Week holidays in the early summer. Mr. Mizohata said they had achieved a good result because of national efforts, but full-scale recovery still needed more time. Mr. Mizohata said that there are festivals, traditional arts and food culture in the Tohoku (northeastern) region, in particular, and he appealed to people to visit Tohoku and cooperate to bring back Tohoku’s energy.

About the situation of foreign tourists whose number had declined because of the travel advisory that each country gave just after the earthquake disaster, Mr. Mizohata said the summit meeting between Japanese, Chinese and South Korean leaders in May had had some effect, and signs of a recovery in the number of the tourists centering on East Asia have been seen for this summer. He said it would take several years for complete recovery, but JTA tries to improve the “safe and secure” image of Japan to achieve the government’s target of “30 Million Foreign Visitors to Japan.” He introduced the government’s efforts; briefing sessions by the JTA and ministries in target countries, inviting the foreign media and travel agencies, sending accurate information through the JNTO website, and having celebrities visit Japan.

Lastly, Mr. Mizohata introduced the promotional film (sent to more than 133 countries/regions) in which a Japanese idol group, “ARASHI,” popular in East Asia, appeared as a tourism nation navigator. He also mentioned that he would seize all available opportunities, such as using MICE, to deliver the message of Japan’s safety and to improve Japanese image.

The Q&A session dealt with various topics including promotion of tourism between Japan and China, relaxing the requirements for issuing individual sightseeing visas to Chinese people, the method of sending information to the world (effects of promotions, etc.), influence on environmental improvement and tourism after the earthquake disaster.