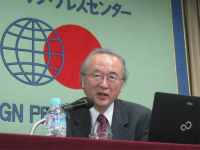 FPCJ invited Professor Masayuki Komatsu of the National Institute of Policy Studies to talk about the Japanese fisheries industry’s road to recovery. Professor Komatsu, whose home town is Rikuzentakata City, one of the disaster-hit places in Iwate Prefecture, has been addressing the problems of the Japanese fisheries industry using his experience as a former fisheries agency official. Including nine foreign journalists, a total of 27 people attended the press briefing.

→Video Report
→You can download the handout here (Japanese only).

At the outset Professor Komatsu talked about the devastating damage the March 11 mega-quake and tsunami inflicted on the fisheries infrastructure in the Tohoku region, showing photos of the region’s major fishing ports of Ishinomaki City and Kesennuma City, Miyagi Prefecture, and also Rikuzentakata, Mr. Komatsu’s home town.

He then said, “The fisheries industry in the Tohoku region was catastrophically damaged, with about 60% of the 29,000 fishing vessels totally or partially destroyed. . . . The Tohoku region is Japan’s leading producer of fisheries output, accounting for about 15% of the total. But in fact, the region’s fisheries production had already dropped to one fifth, or 600,000 tons, from its peak even before the earthquake and tsunami, and the people working in the fisheries industry were decreasing in numbers, they were aging, and only a quarter of them had people to take over from them. Even to get back to what it used to be, the fisheries industry in the Tohoku region would only suffer further atrophy at the onset of this disaster. We should have the mega-quake and tsunami trigger off drastic measures.” Professor Komatsu insisted, “In mid- and long-terms, the government should study designating fisheries cities that could form regional bases, to which neighboring cities, towns and villages would be linked, so that recovery will be integrated. Since the present fish catch is less than half of the peak, fishing ports, harbors, local fisheries markets and other facilities should attain their appropriate sizes. The government should also build complexes consisting of proper-sized and high-quality fish-processing factories.” He pointed out, “The current Fisheries Act stipulates that fishing rights will be preferentially given to fisheries cooperative members, thus preventing outside labor power or enterprises from entering the industry.” He concluded, “The earthquake and tsunami have also afflicted devastating damage on small-scale fishing villages. Taking this opportunity, the government should make it possible that in addition to fishermen, local residents such as fish-processors as well as companies across Japan can go into the fishing industry, with a view to inviting investment from the private sector.”