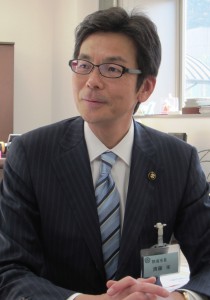 ―How has Atami City been promoting itself overseas?

Atami is sister cities with Sanremo, Italy and Cascais, Portugal, as well as having a friendship agreement with Zhuhai, China. These cities act as bases for direct international exchange. There have been exchanges at the citizen level with Zhuhai, with children playing table tennis and going on homestays. Since becoming sister cities in 1990, we have been given two flowering Jacaranda trees by Cascais. As part of a plan to develop new sights, over the past two years around 100 trees were planted along the coast and a walking path was made. Construction of this new tourism resource was completed in June this year. [Photo: Mr. Sakae Saito, Mayor]

Since becoming sister cities in 1990, we have been given two flowering Jacaranda trees by Cascais. As part of a plan to develop new sights, over the past two years around 100 trees were planted along the coast and a walking path was made. Construction of this new tourism resource was completed in June this year. [Photo:Jacaranda tree (provided by Atami City)] 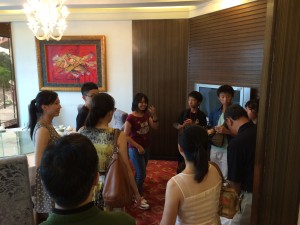 ―What kind of promotions has Atami been targeting foreign tourists with?

We have been focusing on East Asia, particular China, South Korea, Taiwan and Hong Kong. There is a permanent Atami office in Shenyang, China. Atami also sets up booths at events such as the Busan International Travel Fair in Korea. The Atami Association for International Interchange is a private organization that works with travel agents in other countries to help attract tourists to Atami. [Photo: A homestay project in Zhuhai City, China (provided by Atami City)] 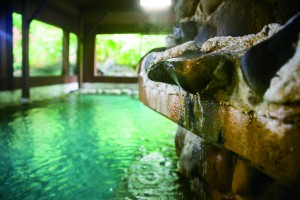 ―How many foreign tourists visit Atami?

Previously, Atami focused on attracting tourists from the Tokyo area. There are around 2.8 million overnight visitors annually, and around 5.8 million visitors total. Due to a lack of promoting Atami to foreign visitors so far, they only account for less than 1% of overnight guests, at around 20,000. This number does not compare favorably with other nearby tourist areas. We are planning to focus our efforts on attracting more inbound tourists as the 2020 Tokyo Olympics and Paralympics approach. Along with improving infrastructure around Atami Station by constructing a new station building and commercial facilities, I would like to further polish Atami’s other good points. [Photo: Hot spring (onsen) in Atami City (provided by Atami City)] 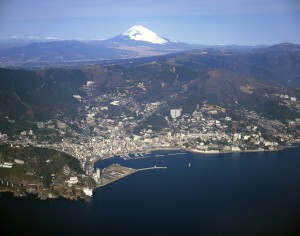 ―Tell us about safety initiatives in Atami.

In addition to standard municipal disaster prevention, we are also focusing on disaster prevention as a tourist city. Since the Great East Japan Earthquake, a lot of attention has been paid to the threat of tsunamis, and Atami has installed evacuation route signs easily understandable by foreigners. Since the geography of Atami consists of mountains right by the sea, it is important that in case of a major earthquake people stay away from the rivers, and head to a location that is higher than City Hall, which is 10 meters above sea level. Pamphlets and maps are handed out on when the Waterfront Fireworks Festival is held, and are always available at hotels and inns. Atami was also one of the first cities to provide disaster training for hotel employees. In Shizuoka Prefecture, town associations form voluntary disaster prevention groups, and not only has every town formed a group, they are also very effective. So in addition to government efforts, average citizens are also becoming able to operate effectively for disaster prevention. [Photo: Mt. Fuji and panoramic view of Atami City (provided by Atami City)] 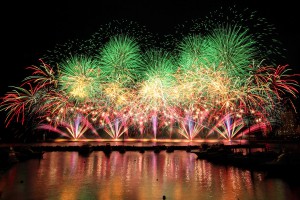 ―Recently, Japan was ranked first in the Country Brand Index. What is Atami’s brand?

The view of Mt. Fuji from the ferry going to Hatsushima, onsen (hot springs), seafood, and fireworks festivals that can be enjoyed year-round. Geisha, and the beauty of nature such as plum, cherry, maple and Jacaranda trees. Atami is a town that has everything foreign tourists are looking for in Japan. Atami is very easy to access from Tokyo, only 35 or 50 minutes by Shinkansen from Shinagawa, and has developed into a popular resort town. I would like to increase efforts to promote the city and have the city government work together with the public to help make Atami the No. 1 onsen resort town in Japan. [Photo: Fireworks event in Atami City (provided by Atami City)]