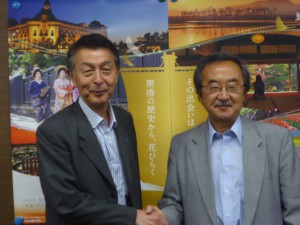 Niigata is the only designated city on the Sea of Japan side of Honshu. We spoke with Mayor Akira Shinoda about the initiatives Niigata has undertaken in recent years having been designated as a model city of various types.

【Water and Land Art Festival:A piece from the 2012 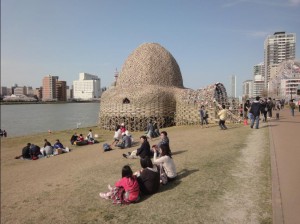 –Niigata has been selected as a model city for various goals, including a National Strategic Special Zone, Environmental Model City and a culture and art creation city recognized by the commissioner of the Agency for Cultural Affairs. This will be the tenth year since the 2005 merger into the expanded city of Niigata. For the first three or four years after becoming a designated city in 2007, we spent a lot of energy building a foundation for the city-building that was to follow. In the last four or five years, we have built the city while considering how to best use this foundation we made, and how to take advantage of Niigata’s positivity and fulfill its missions and roles. I believe it is thanks to these efforts we were chosen as a model city.

After the Great East Japan Earthquake three years ago, Niigata used its position as a city on the Sea of Japan side to play an important role as the largest aid center for restoration and recovery efforts. The role and mission of Niigata are very important. With the possibility of major earthquakes, such as one with its epicenter in Tokyo or an earthquake in the Nankai Trough, it is necessary as a disaster support city to improve both infrastructure and training or national resilience will be nothing more than a pipe dream. Initiatives to make Niigata into a disaster support city will be central to national resilience and so we will make sure to build a strong hub. There was a major earthquake in Niigata in the past. June 16 of this year will mark 50 years since the Niigata Earthquake. The number of citizens who were alive during that earthquake has decreased, so I plan to take this opportunity to increase public awareness of disaster prevention and avoid having the lessons learned fade.

Niigata Initiatives as the Number One Agricultural City in Japan

【The Echigo Plain, a productive breadbasket

Niigata City has No. 1 of all municipalities in Japan for 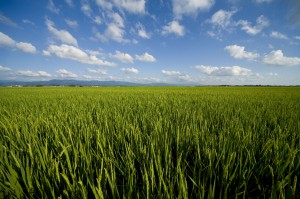 –Niigata City has been chosen as one of the first National Strategic Special Zones, which loosen regulations significantly in specific regions.

As a base for reforms to large-scale agriculture, Niigata City will work on improving its operating base by consolidating farmland and encouraging participation by companies, and encouraging the sixth industry, which handles everything from producing agricultural products to processing and selling them. As the number one agricultural city in Japan, even when compared at a prefectural level the total area of paddy fields in Niigata City is 31st in Japan and the value of its rice output is 18th. The Netherlands is the second largest exporter of food in the world, and has created Food Valley where agricultural and food companies are gathered together with research facilities in order to improve production efficiency. In order to create an agricluster in Niigata, we have been studying agriculture in the Netherlands for the past three or four years and sent delegations to the Netherlands last year and the year before.

–Now that Niigata has been designated as an agricultural zone, people will be anticipating further development in food-related industries.

【Ikutopia Food & Flower: A food and flower complex that had

its grand opening in June, 2014 . Enjoy food and flowers from

Niigata with gardens, markets and restaurants】 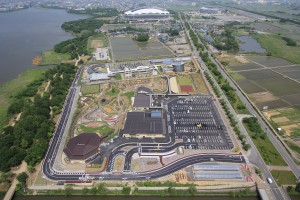 –Many companies in Niigata are closely involved with rice production, aren’t they?

I believe Niigata already had a food valley at one time during the Showa period. Japan’s #1 rice snack maker Kameda Seika, #2 Sanko Seika and #5 Kuriyama Beika are all companies that started from rice fields. Without Niigata rice for Sato Foods’ Sato no Gohan and Sato no Kiri-mochi, it would not have become the company it is today. Rice, agriculture and food processing was actively developed during the Showa period. We are still benefitting from that activity today. Niigata City’s goal is to be a “pastoral designated city,” but we are not taking full advantage of the capabilities or resources of the countryside. I believe there is more that can be done, such as proceeding with developing the sixth industry.

the largest river in Japan, the Shinano River】 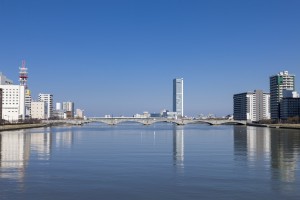 –What issues will there be reforming agriculture?

Loosened regulations for converting agricultural land have not been approved yet, but if for example 10 hectares of abandoned farmland was put into use again, I would like the government to recognize conversion by Niigata City for land that is in poor locations for agriculture, such as by highways or airports. I think that would make city-building much quicker and stimulate the economy. Agriculture is thought of as being grim, but there are many energetic farmers out there having fun with agriculture. Everyone says that the presidents of small and medium enterprises that are successful in local industries are “strange”. The agricultural cooperatives have also started to try and energize regional agriculture, so I would like to use this designation as a Special Zone as a chance to work together with our citizens to develop agricultural policies.

【There are 15 sake breweries in Niigata City
Niigata sake is light and dry, with a crisp, clear finish.】 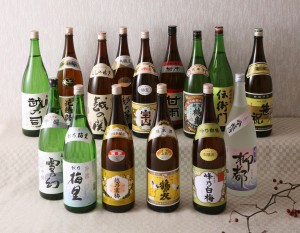 –Kubota, Hakkaisan, Koshi no Kanbai. A lot of good sake is made in Niigata.

Niigata Prefecture has a lot of breweries making high-quality ginjo and junmai sake, and they have made light, dry sake since the Showa period. Although there have been times when the consumption of sake decreased, recently women have been drinking sake more often, and after consumption bottomed out two years ago it began to increase again. Every spring, the Niigata Sakenojin event is held to promote Niigata sake, with around 100,000 people attending over the course of two days. Since 2004, around 90 Niigata sake breweries have participated and attendees can try a variety of different sake. Recently, groups of women and visitors from around Tokyo and other prefectures have started attending too.

【International Food Award The basic theme of the Sano Touzaburo 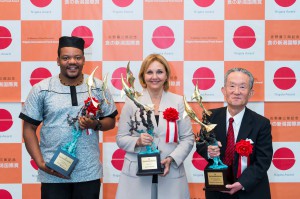 –Would you say food is central to the Niigata brand?

With cooperation from Niigata companies such as Kameda Seika and Bourbon, we have made the first food-related international award in Japan, the Niigata International Food Award. The award is biennial, with this year being the third time it will be awarded. I hope to contribute to international society in the field of food. We are also trying to join UNESCO’s Creative Cities Network in the field of Gastronomy. Niigata’s food culture is focused on rice, and also has a culture of fermentation with sake and koji. I plan to promote our food culture to the world, rediscover the varied food culture developed in our region and remind people from outside the prefecture about the appeal of Japanese food again, so that Niigata becomes known for its food.