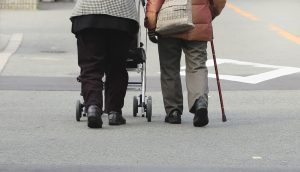 On February 16, the Japanese government approved a new General Principles Concerning Measures for the Aged Society describing guidelines for medium- to long-term policies for dealing with an aging society. This is the first time in approximately five years that the General Principles have been updated, and for the first time, it has been clearly indicated that consideration will be given to expanding the age to begin receiving pension payments to 71 or older, in order to make up for the shortage of workers due to declining birthrates, as well as creating an environment in which seniors with a desire to work can continue working. One of the pillars of the General Principles is to create an “ageless society” in which people of all ages can be as active as they want, revising the current system that handles people uniformly based on their age and the existing social structure of the working generations supporting seniors.

Currently, the age to begin receiving public pension payments is normally 65, but people can choose to start receiving them as early as 60 or as late as 70, with monthly payments increased if the starting age is 65 or older. The new General Principles include guidelines for expanding this system beyond 70 years old. The government plans to proceed with discussions on organizing this system, and revise the law in 2020. Anticipating people working at older ages, the goal is to increase flexibility in starting ages for receiving pension payments.

Four of the Japanese national dailies (excluding the Sankei) discussed the new General Principles in their editorials, praising the framework for an “ageless society” which will expand lifestyle choices for seniors with the energy and desire to work.

The papers also mentioned how despite the option to delay pension payments until the age of 70 currently existing, fewer than 2% of people take advantage of it, and called for revisions to the current system in place to have pension payments stop or decrease at certain income levels, which is preventing seniors from working.

The Yomiuri (February 18) stated that employing seniors who want to work is vital to supporting society and the economy with Japan’s declining birthrate and aging society, arguing that “The ideas behind the framework are appropriate.” The paper also noted that expanding options for the age to begin receiving pension payments beyond 70 and increasing pension payments would allow people to pay their living expenses with income from work, and have greater income from the delayed payments once they retire, suggesting, “It can be described as an effective method to cover the decline in pension benefit levels that will accompany an aging society with a chronically low birthrate.” However, the Yomiuri also commented, “As things stand now, fewer than 2 percent of elderly people use the system that allows for delaying the start of pension payments. The government should work hard to raise awareness of this system.”

The Mainichi (February 19) stated that “The highlight of the latest outline is pension system reform and employment assistance for the elderly,” suggesting that increasing the number of seniors working would improve the sustainability of the pension system, and welcomed the establishment of “lifelong employment support services” at Hello Work employment service centers. The paper mentioned how some people refer to seniors as a “platinum” generation instead of “silver,” to refer to their knowledge and experience, and argued, “Promotion of continued employment and re-employment among those aged 66 or older is essential for industrial society...”

The Asahi (February 18) praised the expansion of choices for seniors, but noted that for deferring pension payments to later than 70, “only a limited number of senior citizens will be able to earn enough money to live without relying on their pensions.” The paper argued that in order to increase the number of working seniors, “the government…should first change the employee pension rule that cuts or halts pensions for workers who are eligible for pension benefits but still earn a certain level of salary.”

The Nikkei (January 26) also argued, “The system to stop or reduce pension payments for people over a certain income level is preventing seniors from working to a degree. This system should also be revised at the same time.”

■ Mixed Opinions on Raising the Age for Receiving Pension

The Nikkei had a noticeably different opinion over future prospects than the other papers, which showed doubts.

The Asahi indicated concerns over this revision of the General Principles, suggesting, “many suspect that this is actually a first step toward raising the official pension age sometime in the future.” Commenting that the general populace has deep-rooted concerns over whether the current pension system is sustainable, the paper argued, “To ensure that the burden will be widely shared across generations, the government should first take steps to ensure that the macroeconomic indexation system will work properly to serve its purposes.” The macroeconomic slide system was introduced in 2004, but has only been applied once, in the 2015 fiscal year.

The Yomiuri also stated, “The physical strength and financial well-being of individual elderly people varies greatly, so there is no way the age at which people start getting a pension should be raised across the board. It makes sense to have a structure that respects the wishes of each person.”

In contrast, the Nikkei praised delaying the receipt of pension payments until after 70, stating, “It should be effective in encouraging seniors to work,” while arguing that this would not help improve the pension system’s finances which worsen every year. Stating that “Reforms to raise the standard age for beginning to receive pension payments is the right thing to do,” the paper argued, “The key to stabilizing pension system finances over the ultra-long term is increasing the standard age for receiving pension payments…. With Japan’s long life expectancy, there should be no problem in making 70 years old the standard age.”

*English translations of The Asahi, The Mainichi, The Yomiuri are from The Asia & Japan Watch, The Mainichi and The Japan News, respectively. Those for  The Nikkei is provisional. The content of this page was made by the Foreign Press Center Japan and does not reflect the opinion of the Japanese Government or any other organization.