With Pyeongchang Olympics Over, Use Lessons for Tokyo Olympics in Two Years

The Sankei Shimbun：Pyeongchang Olympics over, strive to make Tokyo a success

The Nikkei：Use Pyeongchang success as momentum for Tokyo 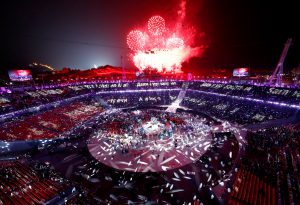 The February 25 closing ceremony marked the end of 17 days of intense competition at the Pyeongchang Winter Olympics hosted in South Korea. Japanese athletes made a new record, winning a total of 13 medals: 4 gold, 5 silver, and 4 bronze. However, with North Korea announcing their intention to participate right before the Games, they were strongly politicized, with efforts made to present reconciliation between North and South Korea. Doping scandals were also once again an issue at these Games. Due to systematic cheating in the Sochi Olympics, Russia was not allowed to compete in these Games as a nation.

On the day of the closing ceremony or the following day, four of Japan’s national dailies (excluding the Asahi) praised the efforts of Japanese athletes at Pyeongchang, while questioning the Olympics being turned into a political show by the two Koreas. They also called for changes to event times being arranged for early in the morning and late at night in response to the desires of the American media company which holds Olympic broadcast rights until 2032.

The Nikkei (February 25) stated that the reason for the large number of medals was “changes to methods for training promising athletes,” praising these results as due to training athletes based on scientific methods form the Japan Institute of Sports Sciences, inviting skilled coaches from overseas, and gathering athletes to train together as a national team.

The Sankei (February 26), commenting on how the number of speed skating medals grew from zero at Sochi to six in Pyeongchang, suggested it was “due to thorough training thanks to organization as a national team.” In preparation for the 2020 Tokyo Olympic Games, the paper called for “further involvement by the country in athlete training, to ensure Tokyo is the best Olympics possible.”

■ Criticism of Politicization of Games

The Yomiuri (February 26) was critical, stating, “It was an extraordinary meet, as the host nation of South Korea and North Korea, which is continuing its nuclear and missile development, tried throughout to use the occasion for political purposes.” In particular, the paper was critical of how the joint North-South Korea women’s ice hockey team formed to demonstrate the Moon Jae-in administration’s reconciliatory stance finished in last place, noting, “It is no wonder that dissatisfaction with this political intervention continued to smolder among South Korean people related to the event.” The paper also criticized North Korea for the “provocative act” of sending Kim Yong Chol, vice chairman of the Workers’ Party Central Committee, as its representative to the closing ceremony, as he is said to be the person behind the sinking of a South Korean navy patrol boat (ROKS Cheonan) on March 26, 2010.

The paper noted that “The number of cities bidding to host Olympic Games has been decreasing. Particularly dark clouds are looming over the prospects for Winter Games,” arguing this caused the International Olympic Committee to feel a sense of crisis: “That the IOC approved the formation of the North-South joint women’s ice hockey team, among other decisions, at the price of undermining fairness in relation to other countries can be seen as consideration for South Korea. The Pyeongchang Olympics has left behind a problem as to the relationship between the IOC and a host country.”

Criticizing that “the biggest mistake of the Games was giving in to North Korea’s diplomatic offensive,” the Sankei stated that the joint North-South women’s ice hockey team “showed contempt for sports, reduced the standing of the Olympics, and will create problems in the future.”

The Sankei also stated, “The problem of doping continues to be a dark cloud hanging over the Olympics,” and called for the sports world to maintain a strong position to deal with the issue.

The Mainichi and Nikkei were both skeptical of how event times were arranged for the early morning and late night in consideration for the Western media company that paid a massive amount for broadcasting rights up until 2032. The Mainichi commented, “There are concerns that the same situation will occur at the Tokyo Games, in the same time zone as South Korea,” and the Nikkei argued, “This could cause issues for the athletes who put in so much effort, and should be fixed.”

Each paper also commented on Tokyo 2020 being the next Olympics. The Nikkei indicated hopes that the athlete training methods which showed results at Pyeongchang would be further improved, and “lead to another new record.” The Sankei argued, “Ideals must be upheld, and efforts made to eliminate political interference,” and the Mainichi brought up how event times were set considering Western media, stating, “For the Tokyo Games, it is important to remember that priority must be given to the athletes above all.”  The Yomiuri stressed, “The next Olympic Games is set for two years from now in Tokyo. Preparations must be accelerated.”

*English translations of The Yomiuri is from The Japan New respectively. Those for The Sankei, The Nikkei and The Mainichi are provisional. The content of this page was made by the Foreign Press Center Japan and does not reflect the opinion of the Japanese Government or any other organization.