The Nikkei：What preparations should be made for sudden eruptions?

The Yomiuri Shimbun：Is there any way to detect signs of abnormality in volcanic activity? 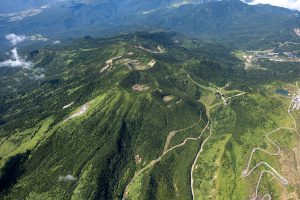 On January 23, 2018, there was an eruption of the Moto-Shirane peak of Mt. Kusatsu-Shirane, located in Kusatsu, Gunma. At a nearby ski resort, one Japan Self-Defense Forces member died, with eleven other people injured in the eruption. The last time there were deaths in Japan due to a volcanic eruption was in 2014, when 58 people died after the eruption of Mt. Ontake on the border of Nagano and Gifu.

The Japan Meteorological Agency lists 111 active volcanoes in Japan. Mt. Kusatsu-Shirane is one of 50 “Continuously Monitored Volcanoes” which are subject to 24-hour monitoring. However, the JMA was focusing on monitoring the Shirane peak, and there was no camera monitoring the Moto-Shirane peak two kilometers to the south that erupted this time. The Town of Kusatsu provided information on the eruption immediately afterwards, but it took time for the JMA to confirm, and they were unable to send out an immediate warning to people in the area about the eruption.

Four of the national dailies (excluding the Sankei) covered this deadly eruption in their editorials, calling for local governments and related organizations to improve their monitoring systems and create evacuation plans in order to prepare for sudden eruptions.

With current volcanology, it is extremely difficult to predict relatively minor eruptions, but after the eruption of Mt. Ontake, the Act on Special Measures Concerning Active Volcanoes was amended, obligating local governments and tourism facilities in the 49 areas at risk from volcanoes throughout Japan to make evacuation plans for visitors and residents. The Asahi (January 27) remarked that “only one-third or so of the 155 municipalities that are home to volcanoes under constant monitoring have crafted emergency evacuation plans. Municipalities that have yet to take action should do so quickly as evacuation plans are fundamental elements to any emergency response.” The paper also noted a major issue of “Many local governments trying to mitigate damage from volcanic disasters lament the dearth of expertise on the issue,” with Japan having very limited numbers of volcano researchers and experts despite the number of volcanoes in the country. The Asahi declared, “In the aftermath of the devastating eruption of Mount Ontakesan, the government stepped up policy efforts to develop the human resources. Steady funding is needed to expand the pool of experts at universities and research institutes.

The Mainichi (January 25), while mentioning that the local governments involved have limited budgets, argued, “Local bodies and related organizations need to prepare for sudden eruptions and make an effort to boost monitoring systems and formulate evacuation plans.” Stating, “Officials must take a renewed look at their monitoring and warning system, placing priority on ensuring the safety of people on the mountain,” the paper called for measures such as increasing the number of cameras for monitoring volcanoes.

The Yomiuri (January 27) noted that since seismometers and surveillance cameras were placed at Mt. Shirane, two kilometers north of the peak which erupted, “The agency could not even confirm the eruption and failed to issue an eruption notice immediately. About two hours later, it raised the volcano's alert level to Level 3, which restricts entry to the mountain.” The paper also noted that the hazard map by the town of Kusatsu of projected damage from an eruption no longer matches the current reality, and called for a review of disaster preparedness measures. The Yomiuri also noted that this eruption was a phreatic eruption, caused by steam, which are difficult to detect, stating, “It can be said the type of volcanic eruption that occurred is also a factor in the failure to catch signs of the eruption,” and argued, “What are the factors that cause a series of eruptions to be unanticipated? A thorough analysis of this matter must be used to improve observation techniques.”

The Nikkei (January 25), while commenting that “This eruption was a combination of factors that betrayed the predictions of researchers and the Japan Meteorological Agency,” also stated, “Just because predictions are difficult does not mean preparations should not be made.” The paper argued, “Announcements of eruption information can be improved,” suggesting using the inexpensive cameras and sensors connected to the internet that have been placed by private companies for tourism purposes. The Nikkei also stated that hazard maps predicting damage from eruptions “can help improve citizens’ disaster awareness and become more effective if maps predicting several different cases are made.”

*English translations of The Yomiuri, The Asahi and The Mainichi are from The Japan News, The Asia & Japan Watch and The Mainichi, respectively. Those for The Nikkei is provisional. The content of this page was made by the Foreign Press Center Japan and does not reflect the opinion of the Japanese Government or any other organization.