Twenty-three Years After the Great Hanshin Earthquake: As Memories Fade, What Lessons Should Be Learned 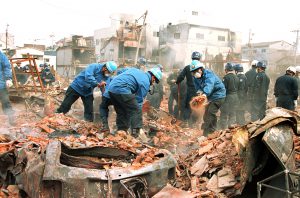 January 17 this year marked 23 years since the Great Hanshin Earthquake occurred in 1995. The national Japanese dailies (except for the Nikkei) discussed the topic in their editorials that day, arguing the importance of learning from the experience.

The Great Hanshin Earthquake occurred in the southern part of Hyogo Prefecture, near Kobe, with 6,434 dead and 43,800 injured. There was 10 trillion yen of damage. Until the Great East Japan Earthquake in 2011, it was the worst natural disaster that had occurred in post-war Japan. However, support for those affected by disaster increased immediately after the earthquake, and with 1.17 million people volunteering over the course of three months, it is also said to be “the year that volunteering began” in Japan.

Unfortunately, in December last year insulting graffiti was found on a monument in Kobe listing the names of the victims of the disaster. With nearly a quarter of a century having passed, and the memories of the earthquake and its lessons steadily fading, what new thoughts should be considered?

■ Lessons of the Great Hanshin Earthquake

The Yomiuri suggested that the support structure built around the Natural Disaster Victims Relief Law was something valuable born from the experience of the earthquake: “The system paved the way for supporting the reconstruction of victims’ houses through public expenditures. Prior to this, victims had to rebuild their homes at their own expense in principle.” This law was established 20 years ago, and provides up to 3 million yen to households whose homes have been destroyed in major natural disasters. This law applies to 72 types of natural disasters including earthquakes, typhoons, and volcanic eruptions, and since its establishment in 1998 a total of 422.9 billion yen has been provided to more than 250,000 households. However, in response to calls to increase the amount of support provided, the Yomiuri stated that considering the fiscal situation that would be difficult, and argued, “…there is a limit to what can be done by the central and local governments in the form of ‘public help.’ This reality must be squarely faced…Each individual should further increase their sense of ‘self-reliance.’”

The Asahi commented on the monument in Kobe to earthquake victims having been vandalized by graffiti, stating, “We do not know who did this, or why. But it is an unforgivable act hurting those who suffered from the disaster… As time passes, memories of disaster must be passed on to ensure they do not fade and become forgotten.” Over 40% of the population of Kobe are people who were born or moved there after the earthquake, and half of the city employees did not experience the earthquake. Last year, there were 64 kodokushi (“lonely death,” death of someone living alone) in public housing for people affected by the earthquake, bringing the total number of kodokushi there to over 1,000. The paper argued, “People who suffered a terrible experience can share their memories with others. The power to emphasize with those memories will help reduce damage, and protect lives.”

The Sankei described the graffiti as “Very unfortunate… It is a despicable crime that dishonors the victims. Memories have clearly faded.” The paper also stated that memories of the Great East Japan Earthquake, nearly seven years ago, are fading as well, and argued, “We cannot be a society that forgets things so easily.” Mentioning how the year of the Great Hanshin Earthquake was said to be “the year that volunteering began” in Japan, the paper proposed, “Those memories should be renewed, and passed on to generations that did not experience the earthquake.”

*English translations of The Yomiuri and The Mainichi are from The Japan News and The Mainichi, respectively. Those for The Asahi and The Sankei are provisional. The content of this page was made by the Foreign Press Center Japan and does not reflect the opinion of the Japanese Government or any other organization.