Defense Budget Increased for Sixth Year in a Row 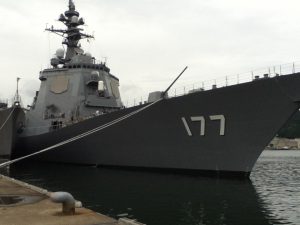 The Japanese government announced its 2018 budget proposal near the end of December 2017. The total defense budget was 5.1911 trillion yen, having been increased for the sixth year in a row and making a new record for the fourth year in a row.

■ Debate Over the Necessity for Increased Defense Budget

The Yomiuri (December 25) stated, “It is necessary for Japan to upgrade its defense capability to an adequate degree at which it can deal with the North Korean and Chinese military buildup, thereby enhancing its deterrence,” arguing that the defense budget being increased for the sixth year in a row was “appropriate.” The paper stated that with the introduction of land-based Aegis systems (two locations, to start operating in 2023) in Japan Ground Self-Defense Force facilities in Akita and Yamaguchi and interceptor missiles functional at altitudes over 1000 kilometers, in response to the repeated launches of ballistic missiles by North Korea, “missile defense capability will likely be greatly improved.” Regarding the new National Defense Program Guidelines and Mid-Term Defense Program expected to be made near the end of 2018, the Yomiuri argued, “To appropriately deal with new threats, it is indispensable to reinforce the defense setup through multifaceted efforts, including measures to defend remote islands and cyberspace, while also counteracting terrorism.”

The Nikkei (December 24) also argued that “Increased defensive capabilities are vital considering the worsening security situation in East Asia.” However, at the same time the paper noted the necessity of ensuring that the defense budget is being used efficiently, declaring, “Is it enough to simply buy more equipment with the Self-Defense Force as it is today? The time has come to consider the state of defense, including the possibility of a fundamental structural reorganization.” The paper also noted that considering new threats such as cyberattacks and electromagnetic pulses, “traditional war seems unlikely,” and pointed out, “Sensitivity seems low towards threats that would not fall under the missions of the Ground, Air, or Maritime Self-Defense Force.”

In contrast, the Asahi (December 23) stated, “Swelling defense spending amid the current fiscal woes will place a big strain on the state budget as a whole,” and urged restraint when considering how much to emphasize missile defense, asking, “Will the new weapons system really be worth the enormous costs? Does the Abe administration’s heavy spending on U.S.-made weapons signal an excessive effort to please Washington?” The paper called for careful debate over the issue at the regular Diet session starting in January.

The Mainichi (December 27) stated that building up military strength is a global trend, with NATO defense spending increasing for three years consecutively, and China’s defense spending of more than one trillion yuan (17 trillion yen), and noted, “What worries us is that overdependence on military strength may leave diplomatic efforts in the shadows.” The paper asked, “Looking at the evolving Asia-Pacific security environment, how are Japanese forces to be equipped and at the same time remain consistent with Japan's nonaggressive defense policy? This question requires unremitting public debate.”

■ Concerns Over Paying Whatever US Government Says

All the papers indicated concerns over the sudden increase in purchases of defense equipment under the US government’s Foreign Military Sales program. There sales are carried out by dealing directly with the US government, and the Asahi noted, “Under this program, Japan pays for the weapons in advance according to price estimates by the U.S. government. When the package is delivered in full, final accounts are settled. This means the price tag can rise later.” Regarding Japan’s FMS purchases rising significantly more 138 billion yen in fiscal 2012 to 410.2 billion yen in the next fiscal year, the paper pointed out, “The Japanese government stresses the advantage of having access to state-of-the-art weapons developed by the United States. Clearly, this puts the United States in an advantageous position. As an example, the paper described how the Minister of Defense originally stated the two Aegis Ashore systems bought through the FMS would cost 80 billion yen each, but that estimate was revised to nearly 100 billion within half a month, which the Asahi criticized as showing how badly the government underestimates costs. The paper was also skeptical of the system’s effectiveness: “Japan will still find it very difficult to shield itself from missile attacks from North Korea involving multiple missiles fired simultaneously or those carrying multiple warheads.”

The Yomiuri, while stating that the rapid increase in purchases of defense equipment from the US “seems to be inevitable in some respects,” also noted, “However, our nation is often pressured to buy at the price asked under the FMS system, which allows the United States to take the initiative in setting a price and time limit for delivery.” The paper noted concerns that FMS purchases have been putting strain on acquiring and maintenance of other equipment, and SDF training costs, and stressed, “Efforts should not be forgotten to persistently negotiate the matter with the United States so an unreasonably high rise in prices will be prevented.”

Regarding the Aegis Ashore price increase, the Nikkei also stated, “we would like to see efforts made to ensure a high price is not paid just because the Trump administration said so.” On the subject of the cruise missiles that were not originally included in the August budget request, the paper noted, “These missiles could also be used to strike enemy territory…. Some opposition members have protested, calling them unconstitutional. More careful deliberation should have been undertaken before deciding to purchase these missiles.”

*English translations of The Yomiuri,The Asahi and The Mainichi are from The Japan News, The Asia & Japan Watch and The Mainichi, respectively. Those for The Nikkei is provisional. The content of this page was made by the Foreign Press Center Japan and does not reflect the opinion of the Japanese Government or any other organization.