The Asahi Shimbun：It is vital to get China, Russia on board for N. Korean response
The Sankei Shimbun：Overcome national crisis through strength of alliance/Cooperate on solving abductions as well
The Nikkei：Japan and the US should show the path to stability in Asia
The Mainichi Shimbun：Abe, Trump need to clarify solutions to N. Korea crisis
The Yomiuri Shimbun：Abe, Trump display strong alliance against N. Korea/Promote ‘free and open Indo-Pacific’ strategy 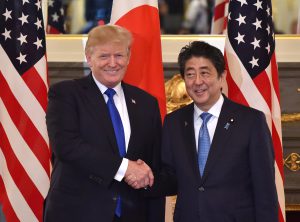 On November 5, US President Donald Trump came to Japan to begin his trip to five Asian countries, and held a summit meeting with Prime Minister Abe the next day. This was the fifth summit meeting since the beginning of the Trump administration, in which they reconfirmed the stability of the Japan-US alliance, agreeing to increase pressure on North Korea as it continues to develop missiles and nuclear weapons, and to increase cooperation on a free and open Indo-Pacific strategy.

All five major Japanese dailies discussed Trump’s visit in their November 7 editorials, and overall they praised the results of the summit as being “significant for Japan and the United States to demonstrate their strong solidarity both at home and abroad” (Yomiuri). However, opinions were noticeably split over increasing pressure on North Korea, with the Yomiuri, Sankei, and Nikkei being supportive, and the Asahi and Mainichi arguing that “Pressure is a method to lead to negotiations.” Regarding trade policy, with the US calling for a correction to the US trade deficit with Japan, and Japan indicating they would leave it up to the results of the Japan-U.S. Economic Dialogue, the papers went no further than stating they would be keeping a close watch on future developments.

The Yomiuri stated that “Amid growing tensions in the North Korean situation, it was significant for Japan and the United States to demonstrate their strong solidarity both at home and abroad,” and suggested the candid relationship between Abe and Trump will “benefit Japan’s foreign policy.” Mentioning Trump’s comment on North Korea that “The era of strategic patience is over,” the Yomiuri argued, “Priority should be placed on
steadily implementing sanctions adopted against the North by the U.N. Security Council,” and “China’s active involvement in this issue is indispensable to diplomatic measures pressing North Korea to eventually reverse its policy.”

The Sankei also praised the two leaders for showing the world “the unshakeable bond of the Japan-US alliance,” and stated, “The impression was given that the US is the most important ally for Japan to overcome this national crisis.” Regarding the response to North Korea, the paper argued that “dialogue for the sake of dialogue” is meaningless, and strongly supported the two leaders agreeing that now was the time to exert maximum pressure, noting, “To make diplomatic efforts effective, the alliance’s deterrence capabilities and capacity to respond to crises must be increased.”

The Nikkei commented on Trump’s statement at the joint press conference that “there has never been such a close relationship between the leaders of two countries -- these two countries, Japan and the United States,” arguing that no other US administration “has ever giving this much praise” to the ‘Japan-US honeymoon.’ The paper also approved of the response to North Korea, “It is important that they reconfirmed focusing on pressure more than dialogue,” and made a proposal to the US: “Just speaking about ‘involvement in Asia’ is insufficient. A network of cooperation must be built from western Asia to the Pacific region, strengthening influence by helping each other.”

The Mainichi stated “they have forged the closest ever collaborative relationship as leaders of the two countries…. We appreciate the current state of bilateral relations, where the two countries' leaders can candidly discuss a broad spectrum of issues.” However, the paper questioned “have the two leaders clarified what solutions they envisage beyond such a hard-line stance on Pyongyang,” declaring, “If Tokyo and Washington have been engaged in discussion on potential emergencies on the Korean Peninsula, Prime Minister Abe should explain to the public the level of risks that could entail such a scenario.” Regarding the denuclearization of North Korea, the paper noted the process was unclear, and argued, “There is a need to draw up a strategic, long-term road map to specify concrete steps to be taken toward the goal of denuclearization.”

The Asahi stated that “The two leaders displayed their strong ties afresh,” but called for persistent diplomatic efforts by both Japan and the US, from the position that “pressure is only a means to open the door to dialogue.” The paper suggested “A key diplomatic challenge is how to win support for the agenda Japan and the United States shared to deal with the North Korean situation from not only South Korea, China and Russia but also other Asian countries,” and emphasized that China’s cooperation was vital.

All the papers focused on the “free and open Indo-Pacific strategy” which the Abe administration called for being confirmed as the Asian strategy for both Japan and the US. The goal of this strategy is to encourage growth and stability from the Pacific to Africa through cooperation centered around Japan, the US, Australia, and India. The Yomiuri approved of the US maintaining the pivot to Asia started by the Obama administration, stating, “It could also lead to holding China in check at a time when that country is militarizing the South China Sea.”

On the subject of the Indo-Pacific strategy, the Nikkei noted, “This is the first case of Trump indicating acceptance of a multinational framework. Careful attention should be paid to how meaningful this is,” and indicated hopes that this could extend to economics, including a return to the Trans-Pacific Partnership (TPP). The Sankei, after stating, “It is uncommon for the US to join in on a foreign strategy that Japan has been advancing,” argued that “This will be effective to prevent the creation of a world order led by China.”

However, the Asahi noted that “it is necessary to avoid making the Indo-Pacific strategy appear intended as a rival to Chinese President Xi Jinping’s ‘One Belt, One Road’ initiative,” arguing, “If Japan and the United States want China to play ball with them in dealing with North Korea, it would be wise to avoid making the Indo-Pacific strategy look like an attempt to keep China’s growing presence in check.” The Mainichi also stated that China’s military maritime expansion in the East and South China seas could not be ignored, but cautioned, “Japan should refrain from taking the initiative in efforts to deter China's military ambitions and provoke the country.”

Regarding trade policy, an area in which no significant progress was seen, the Nikkei suggested that with the Trump administration busy with NAFTA renegotiations and preparing for renegotiations for the US-Korea free trade agreement, “discussions between Japan and the US have been put on the backburner,” and emphasized, “Japan could become the next target at any time. Optimism is not an option.” The paper also stated that TPP negotiations “are proceeding to reach an agreement between 11 nations without the US, as well as allowing the option for the US to return,” and argued, “It is necessary to continue explaining the importance of international cooperation to the US, which tends towards protectionism.” The Asahi criticized Trump’s call for Japan to buy more weapons from the US: “It is not appropriate to link a pressing security concern with a trade issue.”

*English translations of The Yomiuri, The Asahi and The Mainichi are from The Japan News, The Asia & Japan Watch and The Mainichi, respectively. Those for The Nikkei and The Sankei are provisional. The content of this page was made by the Foreign Press Center Japan and does not reflect the opinion of the Japanese Government or any other organization.