72nd Anniversary of the Atomic Bombings: What Route Should Japan Take to Nuclear Disarmament?

The Asahi Shimbun: Remember past and prohibit nuclear weapons

The Sankei Shimbun: Consider threats and engage in debate

The Nikkei: Japan’s dedication to a “world without nuclear weapons” being questioned

The Mainichi Shimbun: Countries must not neglect responsibility for nuclear weapons abolition

The Yomiuri Shimbun: Nations of the world must build definite path to nuclear disarmament 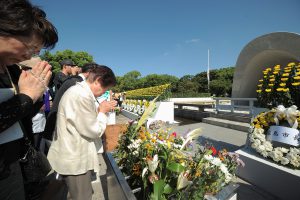 This year marks 72 years since the atomic bombings of Hiroshima and Nagasaki. On August 6, the day the atomic bomb was dropped on Hiroshima, all five national daily papers discussed the anniversary in their editorials, remembering those who lost their lives to the bomb and reconfirming the desire for peace.

However, with Japan boycotting the United Nations Treaty on the Prohibition of Nuclear Weapons, adopted by 122 nations in July, there was a significant difference in opinions between the Yomiuri and Sankei, which recognized the position of the Japanese government considering the reality of Japan having no choice but to rely on the U.S. nuclear umbrella, and the Asahi and Mainichi, which were displeased, stating, “This disappointed hibakusha (atomic bomb survivors).”

The Nikkei noted there was a major gap between the ideal and the reality for nuclear policy, and this gap cannot easily be overcome, but also called for the government to carefully explain to the people why it did not participate in the treaty, and what initiatives for nuclear disarmament it has planned. The Yomiuri and Nikkei praised the Ministry of Foreign affairs for establishing a panel with 16 experts from nations with and without nuclear weapons to prepare for the 2020 Nuclear Non-Proliferation Treaty Review Conference, calling it a new initiative to help bridge the gap between ideals and reality.

■ Opinions Divided on Treaty on the Prohibition of Nuclear Weapons Boycott

The Asahi, ran an expanded editorial, introducing earnest comments from hibakusha and remarking on the adoption of the Treaty on the Prohibition of Nuclear Weapons that “The officials of countries which participated in the negotiations all said ‘I would like to thank the hibakusha.’ The sincere wish of the hibakusha has come true as international law.” The treaty will open for signatures in September, and will enter into force after being ratified by 50 nations. The Asahi criticized the Japanese government’s boycott of treaty negotiations, saying it “disappointed hibakusha.”

In particular, regarding the ideology put forth by nuclear states that “nuclear weapons are a deterrent, and fundamental to security,” The Asahi argued, “There is the risk of accidents or terrorism. This cannot be said to be a stable security guarantee,” and that nuclear states were not sufficiently aware of the “inhumanity of nuclear weapons.” The paper further argued, “The Japanese government should search for a way out of the nuclear umbrella, with the goal of joining the Treaty on the Prohibition of Nuclear Weapons.”

The Mainichi (also expanded) mentioned the Peace Declaration read by Hiroshima Mayor Shinzo Hamai on the second anniversary of the bombing, in which he “underscored the need for a ‘Revolution of Thought’ toward getting rid of what he called ‘horrible weapons’ (atomic bombs) in order to achieve lasting peace,” and noted critically “it appears out of place for Japan to put the brakes on moves toward nuclear weapons abolition” as the only country to be bombed by nuclear weapons. Arguing that “In deciding not to participate in the pact, the Japanese government appears to have sided with the United States rather than hibakusha,” the paper noted that the ultimate goal of both this treaty and the NPT is the abolishment of nuclear weapons: “Japan should endeavor to ease the international conflict over these two pacts and facilitate international cooperation toward elimination of nuclear arms and reconsider its own response to the Treaty on the Prohibition of Nuclear Weapons.”

In contrast, The Yomiuri brought up North Korea’s development of nuclear weapons and intercontinental ballistic missile (ICBM) test launches, stating, “The reality of international politics regarding nuclear weapons remains severe…. Given the fact such a nuclear threat exists, Japan has no option but to rely on the “nuclear umbrella” provided by its ally, the United States,” and arguing that it is “impossible” to join the Treaty on the Prohibition of Nuclear Weapons when it denies the idea of nuclear deterrence itself. The paper then suggests that for the time being, “Japan should follow a path that seeks to strictly uphold the Nuclear Non-Proliferation Treaty (NPT) and tenaciously urge the international community on nuclear disarmament and nonproliferation.”

The Sankei also noted that with North Korea developing nuclear weapons, Japan’s security situation had worsened significantly, and suggested, “It is due to a desire for peace that a debate considering actual threats is necessary.” Regarding Japan’s boycott of the Treaty on the Prohibition of Nuclear Weapons, the paper clearly approved of the government’s position: “While the ideal of the abolishment of nuclear weapons is understandable, if we lost sight of the reality of an increasing nuclear threat due to this ideal, it would be missing the point.”

■ Praise for Ministry of Foreign Affair’s Establishment of Expert Panel

The Nikkei, like The Yomiuri and  The Sankei, noted that it was inconsistent for Japan, as the only country to be bombed with a nuclear weapon, to boycott the Treaty on the Prohibition of Nuclear Weapons, but also mentioned the harsh reality of North Korea’s nuclear weapons program and the growing gap between nuclear states and non-nuclear states, and quoted the historian who hugged President Obama at Hiroshima last year, Mr. Shigeaki Mori: “It cannot be helped considering Japan’s security situation.” Regarding handling the threat of North Korean nuclear weapons in the future, the Nikkei argued, “The government should explain more clearly its reasons for boycotting the treaty, and what role it intends Japan to play in nuclear disarmament in international society.”

Regarding the expert panel being scheduled to make a proposal to the 2018 Preparatory Committee for the 2020 NPT Review Conference, the Yomiuri emphasized, “Bridging the differing positions held by nations with nuclear weapons and those without, and moving nuclear disarmament forward — Japan has a duty to spearhead such efforts as the only nation to have been attacked with atomic bombs.”

*English translations of The Yomiuri and The Mainichi are from The Japan News and The Mainichi, respectively. Those for The Asahi, The Sankei and The Nikkei are provisional. The content of this page was made by the Foreign Press Center Japan and does not reflect the opinion of the Japanese Government or any other organization.