Minimum Wage to Increase 3% for the Second Year in a Row. What Issues Remain?

The Asahi shimbun: Raise the minimum quickly and extensively

The Nikkei: Increase productivity along with the minimum wage

The Mainichi Shimbun: Gov't needs to do more to raise Japan's minimum wage 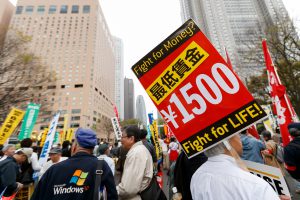 The Ministry of Health, Labour, and Welfare decided on July 26 that the target for increasing the national average minimum wage for the 2017 fiscal year would be 25 yen, which would increase it to 848 yen per hour. This is the largest increase since 2002, when the current system was implemented, and results in an increase of 3% for two years in a row, just as the Abe administration planned.

National papers in Japan discussed this issue in their July 27 editorials. While the increase was praised as “a step forward,” Japan’s minimum wage is less than other developed countries, and there was criticism that “it is still low,” as well as concerns that a rapid increase in minimum wage could put pressure on small and medium enterprises (SMEs). The papers called for improved oversight for “subcontractor bullying,” such as when large companies demand unreasonable discounts from SMEs, as well as measures to rectify the regional inequality in minimum wages.

■ Even with Minimum Wage Increase, Monthly Income Low at 120,000 Yen

The Asahi, while appreciating the largest minimum wage increase yet, noted, “Compared to other major countries such as France or Germany, with minimum wages equivalent to over 1000 yen, there is still a long way to go.” In France, the minimum wage is 60% of the average wage, and in the UK it is 50%, but in Japan it is only 40%. With the economy doing well and an increasing labor shortage, the paper argued, “Now is a good time to raise the minimum wage. It should be raised more rapidly.”

However, even with this increase the only places in the country where the minimum wage will be above the national average of 848 yen are major cities (Tokyo, the highest, is currently 932 yen). In Miyazaki and Okinawa prefectures, which have the lowest minimum wages at less than 750 yen, even working 8 hours a day for 20 days a month would only give a monthly income of a little less than 120,000 yen. The Asahi indicated concern over this situation: “It is questionable whether this is sufficient for someone to support themselves.” Noting that there was significant inequality between major cities and regional areas, and that it would only grow with this increase, the paper called for discussion of measures to solve this issue.

The Mainichi noted that the Abe government included “a minimum wage increase of about 3 percent every year” in its Plan for the Dynamic Engagement of All Citizens, and was positive about this increase: “The latest decision means a step forward to increasing the national average minimum wage to 1,000 yen per hour, which is set as a midterm target.” However, with overtime pay likely to be reduced by the government’s working-style reform plans, the paper noted, “there must be many workers who will not see a rise in their take-home pay despite the slight increase in the minimum wage due to overall work hours being cut.” The Mainichi followed by stating, “Raising the country's minimum wage is necessary, but it will not directly lead to a wage hike for so-called non-regular workers who are paid slightly higher than the minimum wage,” and argued, “To improve the situation of the working poor, who have jobs but struggle to make ends meet, the effect of the latest minimum wage hike needs to spread to workers as a whole.”

The Yomiuri, stating that “Raising wage levels will ensure that the economy breaks free from deflation and working conditions for non-regular workers improve,” welcomed the minimum wage being increased by over 20 yen for two years in a row. The paper also noted that the business side’s acceptance of these large increases was “a sign of their sense of crisis regarding the difficulty in hiring employees.

■ Increased Oversight for SME Bullying and Support for Improved Productivity

The Nikkei, stating that with this latest increase the minimum wage has been increased by almost 100 yen since the beginning of the 2nd Abe administration at the end of 2012, praised the increase as “stimulating consumption and helping grow the economy,” but also noting concerns that it may lead to more SMEs going bankrupt. The paper also called for the government to implement policies to support improved productivity, arguing, “The hope is for minimum wage increases and improved productivity of businesses to be carried out at the same pace.” Specifically, The Nikkei called for a review of systems that prevent businesses from expanding into growth areas, for measures to support using information technology (IT), and for expanded job training. The paper also mentioned the need to improve oversight of major companies engaging in unfair deals with SMEs, such as demanding excessively low prices.

The Yomiuri, while mentioning that “The rapid rise in the minimum wage will be a financial blow to midsize, small and very small businesses that have weak business conditions. The government must avoid creating a situation in which the burden of rising personnel costs leads to a reduction in employment,” also called for the government to “step up the monitoring of large companies that ‘bully subcontractors’ by unfairly demanding they cut costs, and to implement improved trade practices.” For support to improve productivity, the paper mentioned, “The government established a subsidy program for capital investment spending on facilities that contribute to boosting productivity, but it has been underutilized. Some observers have pointed out that the system restricts how the money is spent and say it is not user-friendly. The government should consider more effective policies tailored to the actual conditions of these companies.”

The Asahi noted that the Japan Fair Trade Commission had dealt with 6302 cases of “subcontractor bullying” in fiscal 2016, a record high, and argued that improved oversight is critical to support SMEs. The Mainichi also argued, “While small- and mid-sized businesses should work on improving their productivity, it is necessary to require large companies to comply with appropriate transactions with smaller businesses.”

*English translations of The Yomiuri and The Mainichi are from The Japan News and The  Mainichi, respectively. Those for The Asahi and The Nikkei are provisional. The content of this page was made by the Foreign Press Center Japan and does not reflect the opinion of the Japanese Government or any other organization.