The Asahi shimbun: Duty to protect values even now

The Sankei Shimbun: Value of the framework was maintained, continue efforts to stop protectionism

The Nikkei: The time has come to question the purpose of the G7 summit

The Mainichi Shimbun: With G7 anti-protectionism weakening, can they carry out their responsibility to the world? 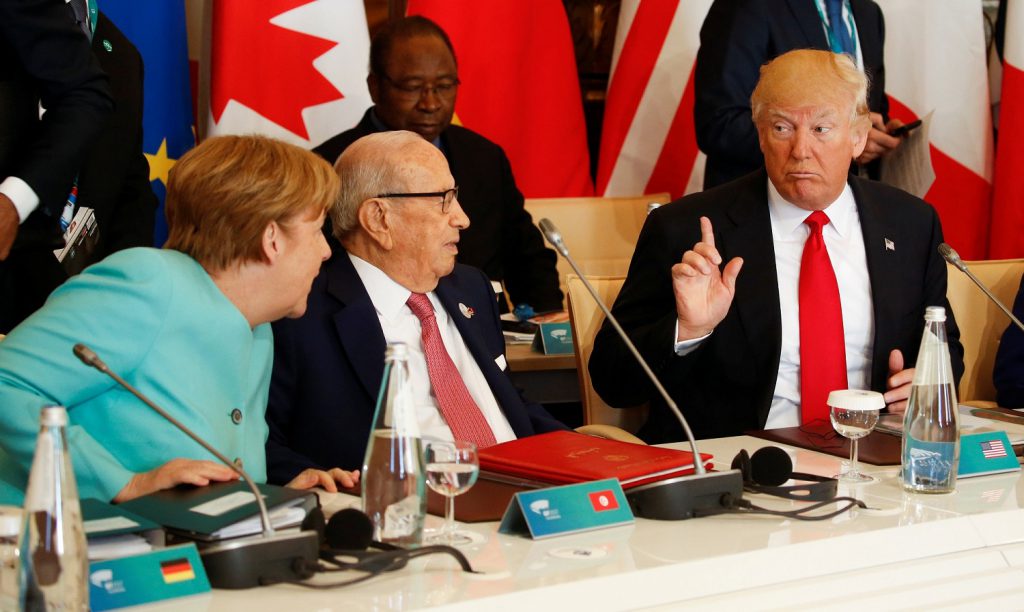 The 43rd G7 summit was held on May 26 and 27 in Taormina, on the island of Sicily in the south of Italy. U.S. President Trump, known for his “America First” policy, participated for the first time, creating difficulties in reaching consensus on maintaining free market structures and on responding to climate change. While the U.S. accepted language in the leaders’ statement about a “commitment to keep our markets open and to fight protectionism,” the U.S. demonstrated a lack of cooperation with the other six nations when it came to the Paris Agreement, an international framework for dealing with climate change. Japan’s national dailies discussed the summit in their May 29 editorials, describing it as showing the least unity since the summits began in 1975, as all the papers showed strong concern over the state of the G7 summit.

The Asahi, declared that the summit was thrown off balance by Trump’s “America First,” and, with the lack of coordination revealed on issues such as free markets and climate change, argued, “We are concerned that all developed countries will be dragged towards an ‘inward-looking’ perspective, and the desire to achieve an open world will lessen.” The paper had some limited praise for the successes of this summit: “Other leaders sat down with Trump and spoke with him, and were successful in getting limited concessions to protect the principle of opposition to protectionism.” The Asahi called for the G7 nations to “stay vigilant in maintaining freedom and democracy, and continue working in the interest of the international community.”

The Yomiuri, welcomed that Trump, who places a high value on reducing the U.S. trade deficit, “compromised with other leaders to allow the specific mention of antiprotectionism in the statement,” but also noted, “German Chancellor Angela Merkel refuted his arguments, showing the G-7 countries are not united like a monolith.” The paper stated that with emerging countries rapidly gaining influence in international affairs, cooperation is necessary in the G7’s policies, and emphasized, “Japan and European countries must persistently explain to the United States the importance of international cooperation.”

The Mainichi , commenting on the leaders’ statement including language about anti-protectionism, indicated doubts: “This doesn’t mean that Trump has abandoned ‘America First.’” The paper explains that since Trump’s pet idea of “fair trade” is included in the statement, “There is still leeway for the U.S. to decide to move towards protectionism by itself.”

The Nikkei, noted how the G7 seemed to have no clear direction, with the summit including “noticeable situations that made it questionable whether simply sharing values would be possible,” and stated critically, “It seems the time has come to question why the G7 summit is even being held.” The G7 used to account for 70% of global GDP, but that percentage has declined to less than 50%. Nevertheless, the paper argued, “United, the G7 still wield significant power. With the current trend towards anti-globalism and populism, the summit should return to its roots and rebuild collaboration.”

The Sankei, while stating that “The G7 did just barely manage to maintain a shared ideal in regards to trade,” declared, “If the G7 loses the values it holds regarding free trade, it is doubtful whether it could still play a role in leading the global economy.” The paper was harsh in its criticism of references to trade deficits stealing jobs being included in order to appease the U.S.: “The U.S. is wrong in simply denouncing trade deficits as ‘evil,’ as is their logic that the reason for trade deficits is unfair trade by other countries.”

The leaders’ statement included an unusual mention of commitment to the Paris Agreement by all six countries other than the U.S., which had decided to review its policies on this international framework to prevent climate change. All five papers had comments to make on this topic:

“It is very unusual to have the leaders’ declaration include a difference in opinions.” (Asahi)

“This indicates that the other countries failed to prevent the U.S. withdrawing from the Paris Agreement.” (Sankei)

“This could lead to the Paris Agreement becoming toothless.” (Mainichi)

“The gulf between the U.S. and Japan/Europe has deepened.” (Nikkei)

“Trump did not deny the possibility of the United States withdrawing.” (Yomiuri)

The papers showed concern over the lack of consensus among the G7, and criticized the Trump administration’s stance.

In particular, the Sankei stated that the significance of the Paris Agreement lay in “China and the U.S., which account for 40% of carbon dioxide emissions, joining for the first time.” The paper also showed concern by commenting, “Consideration must be given to how the U.S.’s actions will have a negative impact on Chinese reduction of emissions as well.”

Only the Yomiuri and Sankeicommented on the G7 leaders’ statement including mentions of “strengthening measures” in response to North Korea continuing to take provocative actions and develop missiles and nuclear weapons. The Yomiuri was approving, stating, “It is significant” that the statement went so far as to refer to “new levels of threat.” The paper argued that, using the leaders’ statement as a base, “G-7 countries must urge China, which has a strong influence on Pyongyang, to strengthen its pressure and establish an international encirclement of the country.”

The Sankei commented, “It is very meaningful that North Korea was described as a ‘top priority,’” and argued that this showed Japan and the U.S.’s stance of “emphasizing pressure over dialogue” had “received approval.” The paper also approved of references to China’s maritime expansion in the statement: “It was a major success to have the leaders’ statement reinforce the importance of the rule of law on the seas.”

*English translations of The Yomiuri, is from The Japan News, respectively. Those for The Asahi, The Sankei, Nikkei and The Mainichi and are provisional. The content of this page was made by the Foreign Press Center Japan and does not reflect the opinion of the Japanese Government or any other organization.