Sankei: Resolution towards an unshakeable alliance / Dialogue that contributes to the benefits of “freedom” 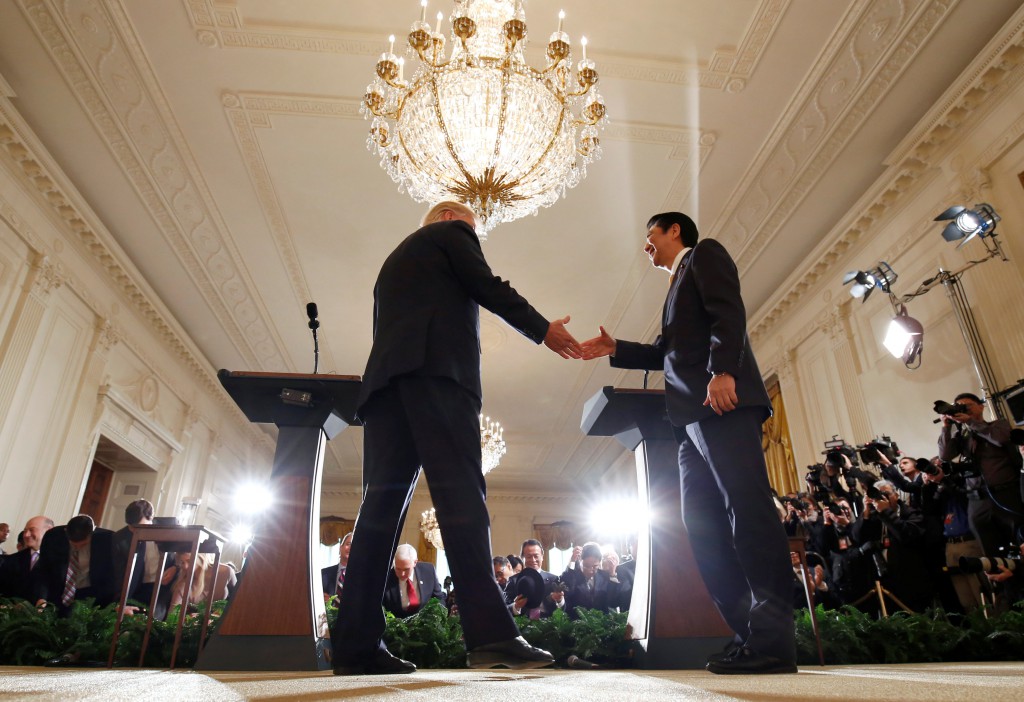 Prime Minister Abe and President Trump held their first summit in Washington on February 10, and released a joint statement of their “determination to further strengthen the U.S.-Japan Alliance and economic relationship.” Regarding the security of the Senkaku Islands in Okinawa, the statement clearly indicated that they were covered by Article V of the U.S.-Japan Treaty of Mutual Cooperation and Security, which specifies the responsibilities of the U.S. in defending Japan. The statement also included agreement on an “economic dialogue” across sectors including trade, fiscal, and monetary policies. On February 12, all five Japanese national papers ran an expanded editorial about the Japan–U.S. summit.

All five dailies praised the meeting between Abe and Trump as having built trust between the two leaders, and were generally positive about the results of the discussions, which focused on security policy. However, there were still calls for caution in regards to economic issues revolving around trade and monetary policy, as the future outlook remains unclear.

In particular, the Yomiuri, Sankei, and Nikkei welcomed the confirmation from Trump that the Senkaku Islands are covered under Article V of the U.S.-Japan Treaty of Mutual Cooperation and Security. The Yomiuri declared, “It is greatly significant that these points have been confirmed by Trump himself…and that the matters have been written into a document,” and praised it as “the greatest deterrent” to China’s accelerating marine advancement and North Korea’s nuclear and missile development.

The Sankei welcomed Trump thanking Japan for hosting the U.S. Army, arguing, “It is very meaningful that he has recognized the importance of an international order based on the rule of law, and shares the basic values of opposing changing the status quo through force.”

The Nikkei was also welcoming: “This reconfirmation is very significant considering the perception that the Trump administration was not interested in becoming involved in the Asia Pacific region.”

Taking a different stance, the Asahi stated that a “certain level of agreement” was reached on economic and security policies, which “could be seen as a cause for relief on Japan’s part.” However, the paper also noted, “…staging a ‘honeymoon’ of bilateral ties will not carry much significance unless their doing so helps maintain the order of the international community.”

In particular, with the uncertainty of the international situation, the Asahi argued that “it is perilous…for Japan to rely on its conventional diplomacy of all-out preoccupation with the United States,” and also noted, “…there is no visible sign that Abe urged the importance of international cooperation earnestly upon Trump,” which was a key point of focus for this summit. The paper questioned whether Abe “pressed Trump…to change his mind” about withdrawing from the Trans-Pacific Partnership (TPP), and argued that “the joint statement endorsed Washington’s withdrawal.”

The Mainichi insisted, “Japan has a responsibility to play a mediatory role to prevent the United States from adopting an inward-looking policy, while urging the country to stay committed to the framework of international cooperation.” The paper also clearly stated, “Japan could lose the international community's confidence if it were to cozy up to President Trump simply to secure an ‘unshakable Japan-U.S. alliance.’”

While welcoming the lack of harsh demands from the U.S. on economic policies such as trade and monetary policy, the papers took a cautious stance. The Nikkei stated, “Making a deal using trade and security must be avoided.” The paper followed by noting, “There is no need to deny the possibility of a Japan–U.S. free trade agreement from the outset,” but argued that “it is necessary to persevere in explaining” to the U.S. the importance of the TPP.

Noting that the Trump administration “probably has in mind the correction of the U.S. trade deficit with Japan,” the Yomiuri stated that “Japan attaches importance to ‘free and fair rules,’” and that the two countries are “in the same circumstances but wide apart in their values and objectives.” The paper also noted the need to watch carefully how the U.S. approaches negotiations for a Japan–U.S. FTA: “The U.S. might push for opening the market even more than the TPP would have.”

While the Sankei allowed that Trump’s trade policy, focusing on bilateral agreements, is “one option,” the paper’s analysis was that if such an agreement was made, the U.S. would “make more demands than the TPP, and push to have them accepted,” to benefit the U.S. The daily argued that Japan should “continue to explain the importance of multi-lateral cooperation,” in order to strengthen economic relations in the Asia Pacific region.

*English translations of The Yomiuri and The Mainichi are from The Japan News and The Mainichi, respectively.  Those for The Asahi, The Nikkei and The Sankei are provisional. The content of this page was made by the Foreign Press Center Japan and does not reflect the opinion of the Japanese Government or any other organization.