Sankei: Being anti-Japanese is self-destructive

Nikkei: Do not ignore the bilateral agreement

Mainichi: Concerns over bilateral accord with S. Korea on 'comfort women' issue 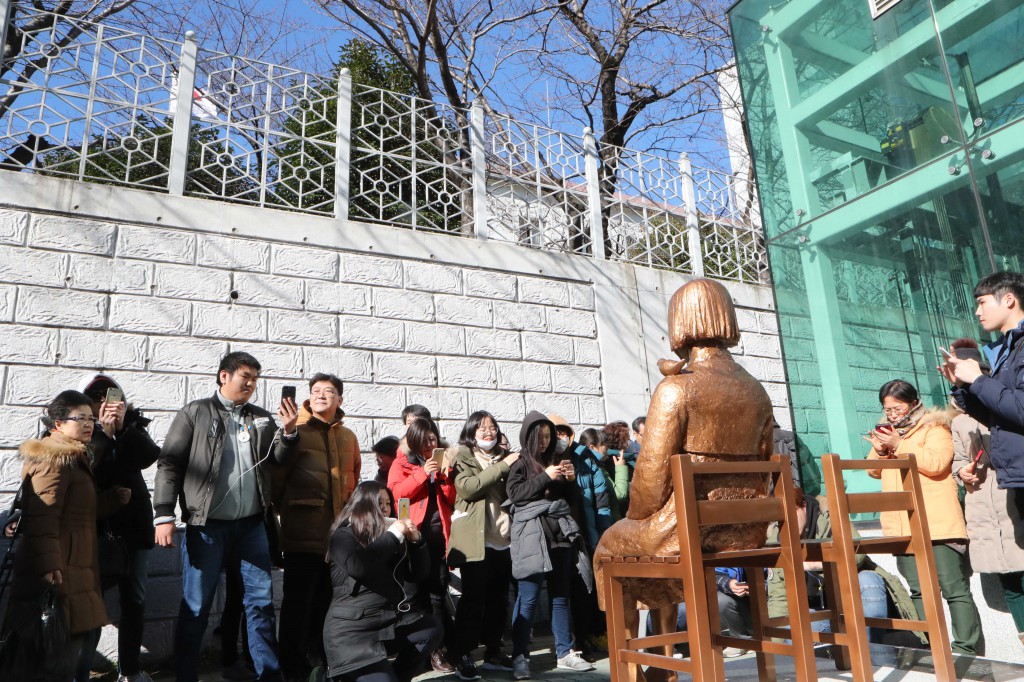 In late December 2016, a statue of a girl symbolizing comfort women was placed in front of the Japanese Consulate General in Busan, South Korea. In response, the Japanese government temporarily recalled its ambassador to South Korea on January 6.

The five national dailies, concerned about the seriousness of the situation, all covered this issue in editorials between January 5 and 7.

All five dailies noted their deep concern over the installation of this statue while the South Korean political landscape is in confusion due to the impeachment and suspension of powers of President Park Geun-hye: “This is a grave situation,” (Yomiuri), “The relationship between Tokyo and Seoul is on the cusp of another long period of tension and distrust,” (Asahi), “This is a cause for concern,” (Nikkei), “Seoul's failure to take countermeasures against the statue clearly runs counter to the spirit of the bilateral agreement,” (Mainichi), and “This further violates the bilateral agreement,” (Sankei).

The Yomiuri was critical regarding South Korea’s response: “It is questionable that the South Korean government has not clarified its position on the issue, saying that it is a matter to be judged by a local government.… The South Korean government should maintain at least the minimum level of diplomatic order.” The bilateral agreement was to be a “final and irreversible resolution” to the comfort women issue, and so “Japan-South Korea relations had been changing for the better,” but the paper noted that with the installation of the statue “Anti-South Korea sentiment among the Japanese people will inevitably heighten again.”

Based on the premise that “The agreement is the foundation for advancing Japan-South Korea relations,” the Mainichi argued in favor of the Japanese government’s response: “It is necessary for Japan to take diplomatic measures to express its strong displeasure about the installation of the statue.” While stating that “the two countries should not aggravate national sentiments in both countries or allow the matter to adversely affect the bilateral accord,” the paper noted that the U.S. has repeatedly stated its support for the bilateral agreement, and emphasized that “Good Japan-South Korea relations are also indispensable for an alliance between the three countries.”

The Sankei was critical of the wait-and-see approach the South Korean government took regarding the situation: “This cannot be overlooked. Is the rule of law in South Korea one that allows laws to be twisted through emotion?” Regarding the Japanese government’s response, the paper went so far as to say “Although it was overdue, this response is only reasonable. A country that ignores the law and leaves the situation to worsen cannot be trusted.”

The Nikkei noted the danger of losing the momentum towards improving Japanese-Korean relations, and stated strong concern that “A movement is beginning mainly among opposition parties to nullify the bilateral agreement.” The paper called for the South Korean government to be careful with its words and actions: “In the event that a new administration decides not to abide by international promises, such as the agreement on comfort women, South Korea will lose trust from international society.”

The Asahi stated that the agreement “…is supposed to be the starting point for the process of developing further the relations between the two governments. Neither side should take any action that could undermine this agreement.” The paper also declared, “South Korea should take actions that demonstrate its commitment to the language of the agreement,” and argued, “This is time for both governments to view the situation from a long-term perspective and step up their efforts to convince audiences both at home and abroad of the value of evolving the bilateral relations from an endless series of conflict into mutually beneficial ties.”

The Asahi stated that “The Japanese government is perfectly justified in pressing South Korea to deal with the issue in an appropriate manner,” in reference to the Japanese government’s response of temporary recalling its ambassador and suspending talks on a currency swap arrangement. However, the paper said that “freezing economic talks and human exchanges with South Korea…will weaken Japan’s position in future negotiations with South Korea,” and argued that “more measured” actions should be taken, stating, “Tokyo’s excessively strong reaction can only trigger a vicious downward spiral in bilateral relations.”

■ Actions of Foundation Not Reported on in South Korea

Another point was the activities of the foundation to support former comfort women established based on the bilateral agreement. Using the one billion yen provided by the Japanese government for funding, 100 million won (10 million yen) has already been provided to 29 of the 46 former comfort women surviving at the time of the agreement. The Yomiuri argued, “The foundation’s project has progressed so far that the deal is irreversible and there is no room for renegotiations,” and also noted strong concerns that this situation “has not been sufficiently reported in South Korea.”

The Mainichi also wrote, “…a foundation set up by South Korea in accordance with the bilateral accord is smoothly implementing a project to provide funds to former comfort women.…although this has rarely been reported in South Korea. The will of the former comfort women should be respected.” The paper stated, “What is regrettable is that the South Korean public's understanding of the bilateral agreement does not appear to have been deepened.”

The Nikkei had some praise: “Japan has already fulfilled its obligations, and funds have begun being provided to former comfort women.” The paper called for Korea to fulfill its promised obligations in this international agreement, including the removal of the comfort women statue in front of the Japanese Embassy in Seoul.