APEC Summit and the TPP Problem

Sankei: Increase solidarity and prevent derailment of the TPP

Nikkei: Stick to free trade, don’t give up on the TPP

Yomiuri: Don’t allow TPP trade agreement to be sent back to drawing board 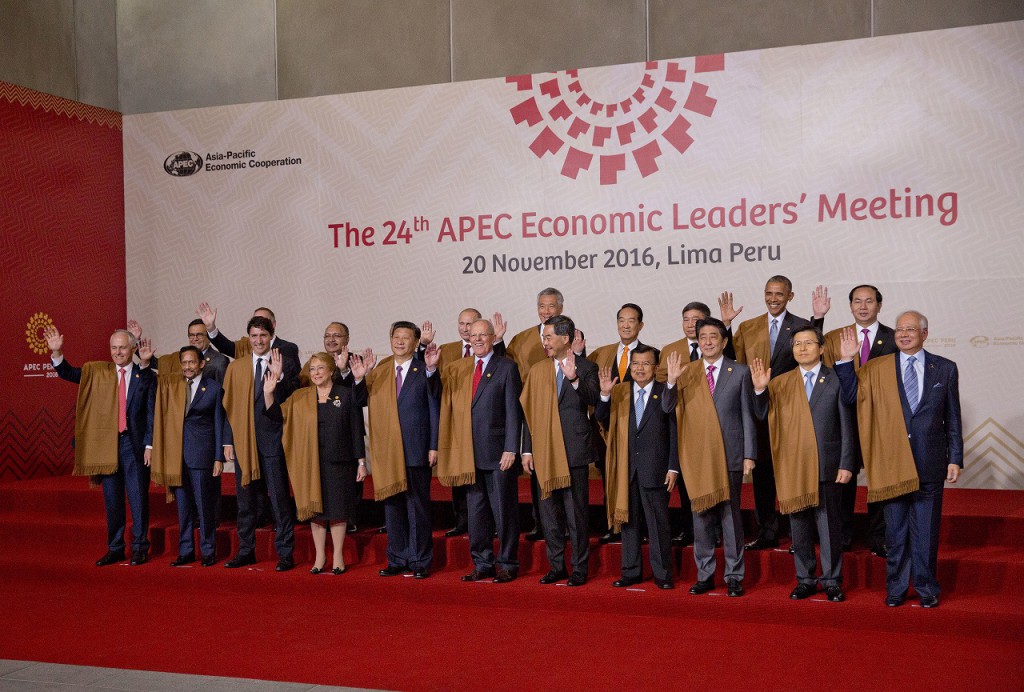 The Asia-Pacific Economic Cooperation (APEC) summit was held on November 19 and 20 in Lima, Peru, and ended with confirmation of the importance of free trade. At the same time, there was a summit meeting between the leaders of the 12 countries involved in the Trans-Pacific Partnership (TPP). With US president-elect Trump having announced his intention to withdraw from the TPP, Japanese dailies discussed this issue in their editorials: the Yomiuri on the 21st, and the Asahi, Sankei, and Nikkei on the 22nd.

All four papers praised APEC for confirming its intentions to work towards free trade and fight against protectionism, even with the implementation of the TPP having become uncertain. All but the Asahi also called for persistent efforts to convince the US to ratify the TPP.

The Asahi focused on how the APEC Leaders’ Declaration included phrasing about how free trade is “being called into question,” and emphasized that the key to putting an end to stagnation in the global economy and stopping the spread of protectionism is for all the countries to work together to ensure that free trade does not lead to increased disparity and inequality.

■ Responding to the TPP

Mentioning how the TPP is an agreement covering a wide range of areas from “trade to investment, and includes the elimination or reduction of trade tariffs, the protection of intellectual property and proper working conditions,” the Yomiuri praised the TPP, writing “It is ambitious and is expected to serve as the standard for next generation economic agreements.” However, the paper also argued that since the TPP was only agreed upon after five years of difficult negotiations, it is like a “fragile piece of glassware,” and “The result of the negotiations carried out by the participating countries should not be sent back to square one.”

Regarding movements among the 12 countries to put the TPP into effect even without the US, considering Trump’s declaration that he will withdraw from the TPP, the Yomiuri noted, “It is one thing to consider every possible option, so that the hard-won accord will not be sent back to the drawing board.”

Stating that the TPP is “the most important foundation” for building an Asia Pacific free trade area, the Nikkei emphasized that “The participating countries, including Japan, should not give up on ratifying the TPP, and must continue moving forward with the necessary domestic procedures.” In particular, the paper emphasized that the Abe government “should ensure that the ratification legislation for the TPP being debated in the Upper House passes.” If that occurs, it would mean Japan was second only to New Zealand in being soonest to ratify among the 12 countries, and the paper argued that “It is necessary to persistently explain the purpose of the TPP to Mr. Trump,” based on this ratification.

However, regarding creating a new Asia Pacific agreement without the US participating the paper noted “In the case that the largest economic power, the US, left the TPP, the degree to which it would help grow the regional economy through liberalization of trade and investment would be limited,” and so the 11 other countries would have to maintain solidarity, considering the success of the TPP is predicated on the cooperation of all participating countries, including the US.

The Sankei praised Abe for his actions considering the uncertainty of the future of the TPP, stating, “Prime Minister Abe was completely right in encouraging action and not taking a wait and see approach.” The paper also argued that the government should work to pass the TPP legislation, and that it “must take a leadership position to encourage the other countries to push the US to ratify.”

Regarding movements to create a new agreement without the US, the Sankei bluntly stated, “It is too early to give up on bringing about this massive, progressive agreement that could become a new global standard.” The paper also made a request of Mr. Trump: “When meeting with the leaders of many countries, please look at encouragement to ratify the TPP without bias.”

The Asahi focused on how the APEC Leaders’ Declaration included phrasing about how free trade is “being called into question,” and praised the declaration: “The intent to deal with the objection that ‘free trade is spreading inequality and disparity’ is clear.” The paper states that this skepticism comes from the decision for the UK to leave the European Union, and the unexpected victory of TPP opponent Trump: “The sense of crisis has risen to unprecedented levels.”

The Asahi took the position that in order to resist protectionism around the world, bringing about the Free Trade Area of the Asia-Pacific (FTAAP) including the 21 member countries/regions of APEC, the TPP, and the Regional Comprehensive Economic Partnership centered around China are all necessary, and that this APEC Leaders’ Declaration should be used as a new starting point for that goal.

On the topic of the RCEP, that Japan is also participating in, the Sankei stated that “the standards for liberalization are less than the TPP,” and emphasized that the TPP would be more beneficial than the RCEP: “Above all, we must not forget the importance of countries that share values including liberalism and the rule of law building a new economic order with the TPP.”

While stating that the China-led RCEP would grow in importance if the TPP stalled, the Yomiuri argued that “Reflecting on China’s domestic situation, however, it would become difficult to work out any high-level rules on such matters as reforms of state-owned enterprises and the protection of intellectual property. The TPP is vital to avoid such a situation.”

The Nikkei took a more neutral stance than the Yomiuri or Sankei, and argued, “If Japan took an active role in negotiations (for the RCEP including China, India, and others), then it could put strong pressure on the US to participate in the TPP.”

*English translations of The Yomiuri is from The Japan News.  Those for The Asah, The Mainichi, The Nikkei and The Sankei are provisional. The content of this page was made by the Foreign Press Center Japan and does not reflect the opinion of the Japanese Government or any other organization.