Debate Over Abdication by the Emperor 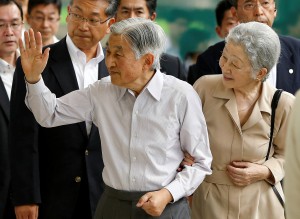 Sankei: Careful debate needed over future of the country, government has heavy responsibility for longevity of imperial family

Nikkei: Need to think about the role of the emperor as a symbol in an aging society

Mainichi: Emperor's desire to abdicate should be positively accepted

Yomiuri: Promote debate on the Emperor’s proper role as symbol of state

On August 8, Emperor Akihito released a video message to the Japanese public, in which he spoke about his feelings on the duties of the emperor as a symbol. In the midst of a rapidly aging society, the 82-year-old emperor stated “However, when I consider that my fitness level is gradually declining, I am worried that it may become difficult for me to carry out my duties as the symbol of the State with my whole being as I have done until now.” Although he avoided directly mentioning it due to constraints in the constitution, he indicated his desire to abdicate.

The Sankei and Yomiuri, while stating that the emperor’s intentions should be respected, focused on the importance of “careful consideration” moving forward. The Asahi criticized the inaction and negligence of the administration when it came to handling various issues with the emperor system and the imperial family, and emphasized “It is up to the people to decide on the issue while reflecting on the emperor’s wishes.” The Nikkei also noted politicians had neglected their responsibility to debate the system of the emperor as a symbol, to the extent that the emperor had to release a message himself.

The Mainichi stated that the source of the emperor’s desire was “…the Emperor's awareness that not only performing ceremonial acts in matters of State but also spending his time with the Japanese public on his own will is the core of his role as the symbol of the State,” and argued that “the system of the Emperor as the symbol of the State has taken root in Japan through his concerted efforts with the people.” The paper also stated that with the aging population, a stable Imperial succession is “a need of the times.”

The Nikkei argued for giving deep consideration to the emperor’s desire, writing “It is through the emperor as a symbol actively showing himself to the people that the bond between the imperial family and the people can be strengthened.” The paper also noted that according to surveys by several media organizations, “a majority is accepting of abdication,” and urged the government to refer to examples of abdication in Europe while “quickly and carefully considering the situation.”

The Yomiuri and Sankei both stated their positions that the emperor’s indication of his desire to abdicate should be respected, and used as an opportunity to debate the status of the emperor as a symbol. However, they also took a cautious position, noting that specific measures would need to be considered from various angles.

The Yomiuri pointed out that “Some people say that voluntarily stepping down from the Chrysanthemum Throne is inconsistent with the stipulation in the supreme law that the Emperor shall be ‘the symbol of the State and of the unity of the people, deriving his position from the will of the people.’” The paper also noted that “If old age can be used as a reason to abdicate, the issue will not be confined to the reigning emperor alone,” and “the issue of consistency, as the government in its response in the Diet has argued against abdication by pointing out the possibility of the Emperor being forcibly dethroned for political ends.”

The Sankei also stated that “The people should sincerely consider the emperor’s desire,” and noted that the current Imperial House Law, which has no mention of abdication and assumes the throne will only be passed on at the emperor’s death, is “closely connected to the core of imperial succession, and so many are cautious about a reform to the Imperial House Law to recognize abdication.” They note the reason for this is that acceptance of abdication could lead to the emperor being forced to abdicate against his will, which could “damage the stability of imperial succession.” Therefore, the paper suggests that instead of reforming the permanent law that is the Imperial House Law, there is the possibility of using special legislation, “to enable only the current emperor to abdicate.”

■ The Final Decision Lies With the People

The Asahi argued that “Akihito’s message as a whole reflects his strong sense of responsibility for performing his duties as the symbol of the state and of the unity of the people,” and noted that “The emperor’s worries…as expressed in his address must have struck a sympathetic chord with many Japanese.”

However, regarding the various issues surrounding the imperial family in recent years, the paper pointed out that “The developments concerning the emperor’s wish to retire have brought to sharp focus the contradictions and difficulties in the system in which the emperor, a living person, and his family need to perform roles in line with the concept of the emperor as the nation’s symbol.”

Clearly indicating the basic principle for any future action, that “The status of the emperor is based on the collective will of the people with whom sovereign power resides. It is up to the people to decide on the issue while reflecting on the emperor’s wishes,” the Asahi warned that hasty decisions must be avoided, but also noted “moving too slowly would only deepen the crisis facing the imperial family.”