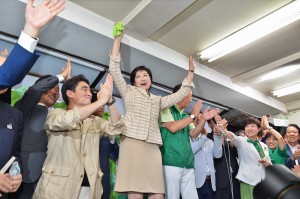 Sankei: Change from chaos to stability

Mainichi: Koike should live up to expectations of Tokyo voters for change

In the Tokyo gubernatorial election held on July 31, Yuriko Koike,  former Minister of Defense was elected without any endorsement from a major party, with a significant lead over Hiroya Masuda, former Minister of Internal Affairs and Communications  (endorsed by the Liberal Democratic Party, the Komeito, and the Party for Japanese Kokoro) and Shuntaro Torigoe, journalist  (endorsed by the Democratic Party, the Japanese Communist Party, the Social Democratic Party, and the People's Life Party & Taro Yamamoto and Friends). This is the first time Tokyo has had a woman as governor. In their editorials on August 1, the five national dailies all made very similar comments about the reasons for Koike’s victory: the 2020 Tokyo Olympics and Paralympics budget, waiting lists for daycare, and working with the Tokyo Metropolitan Assembly.

■ Victory a Rejection of Established Parties

All five papers agreed that the reason for Koike’s victory was that she presented her campaign as being that of an “individual,” emphasizing her leaving political party in this election that divided the LDP. The Asahi stated “The ruling party’s decision, based primarily on its partisan interests, probably provoked a backlash among voters,’” with the Mainichi declaring “The results once again show that support from political parties is not necessarily a decisive factor in Tokyo gubernatorial elections.”

The Yomiuri criticized the LDP for notifying its members that they would be penalized if they or their relatives supported Koike: “There is no denying that the instruction came off as high-handed and narrow-minded, which ultimately benefited Koike.” The Mainichi also noted that this obvious pressure from the LDP “only stirred criticism from voters and worked to Koike's advantage.”

The four opposition parties also got the cold shoulder from voters in their backlash against established political parties, with election strategies relying on organizations ending in failure. The Sankei criticized the opposition parties, writing “The DP repeated their mistake from the Upper House election, continuing to consider the Tokyo gubernatorial election as a place for a coalition between opposition parties.” The Mainichi stated “The DP as a whole should discuss how it should form a united front with other opposition parties and seriously scrutinize the election outcome,” and strongly criticized DP leader Katsuya Okada for declaring that he would not run in the next party presidential election the day before the gubernatorial election: “He deserves criticism that he attempted to evade being blamed for the election setback.”

All five papers discuss the splitting of the burden of costs for preparations for the Olympics and Paralympics, one of the issues in this election. Although originally the Olympic budget was said to be 700 billion yen, there are concerns that total costs will reach as high as two or three trillion yen. The Nikkei argued “A complete picture of the costs involved in the Olympics must be presented immediately, and unnecessary expenses eliminated…. Starting now, work must be done based on a plan that includes what happens after the Olympics as well.”

The Yomiuri wrote “As circumstances stand, it is inevitable that the metropolitan government will shoulder an additional financial burden in hosting the 2020 Tokyo Olympics and Paralympics. The question is how to reach an agreement with the national government and the event’s organizing committee regarding the matter, while also gaining the understanding of Tokyo residents,” noting the importance of skills for negotiating with the national government and the organizing committee. The Asahi mentioned “…Koike criticized the Tokyo government’s opaque policymaking process as a “black box” and called for greater transparency. The issue of financing the 2020 Olympics and Paralympics will test her commitment to addressing the issue.”

All five dailies commented on other policy issues including eliminating the waiting lists for daycares (currently with approximately 8500 children waiting), medical welfare policy, and disaster prevention, but the Sankei, Nikkei, Mainichi, and Yomiuri all also noted the importance of working together with the metropolitan assembly in order to implement these policies. When announcing her candidacy, Koike declared that “If a no-confidence motion is brought forward, I will dissolve the assembly,” which along with other comments clearly demonstrated her intent to oppose the Tokyo Metropolitan Assembly’s LDP members in this election that split the LDP.

On this topic, the Nikkei showed concern that “Even a minor error could lead to Tokyo politics falling into confusion once again.” In particular, the paper notes that since local governments have a dual representation system in which voters elect both the governor and assembly members, “Just because she has received the support of voters does not mean she can ignore the assembly when moving forward,” urging the new governor to deal calmly with them. The Mainichi also mentioned “If Koike were to regard the metropolitan assembly as an enemy and dramatize her confrontation with the assembly, she would not be successful in reforming the metropolitan government,” emphasizing the need to carry out proper debates with the assembly regarding policies.

Arguing that “Above all, she will be required to implement practical policies,” the Yomiuri agreed with Koike’s criticism that “decision-making power is concentrated in the hands of some influential LDP assembly members,” stating “The metropolitan assembly must seriously take this to heart.”

The Sankei, while stating that “The vast number of issues facing the Tokyo metropolitan government are not so simple that they can be solved by such theatrical methods,” also noted “If she proposes specific policies for reforming various systems in order to move Tokyo politics forward and opposes those forces that resist these changes, voters would surely be pleased.”

Regarding the confrontation with the LDP, the biggest party within the assembly, the Asahi mentioned only that “We welcome her stance if that means true competition for better, citizen-focused policies through serious debate at the assembly.”