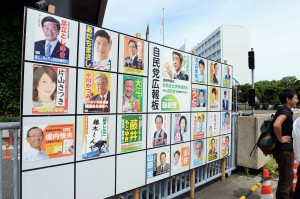 Asahi: Election victory is not a mandate to change the Constitution

Sankei: Use stable base to solve existing issues

Nikkei: There are more important things than changing the Constitution

Yomiuri: Abe must use stable political base for economic revitalization / Abolition of security laws not supported

On July 10, the 24th House of Councillors election was held, with the LDP and Komeito coalition winning 70 seats, greater than the 61 seats that Prime Minister Shinzo Abe had said would constitute a victory. Initiatives from Osaka won 7 seats, and combined with uncontested seats from the Party for Japanese Kokoro, various minor parties, and independents, the pro-constitutional reform members now hold 165 seats, over the two-thirds of seats (162) needed to propose constitutional reform. At a press conference after the election, Abe said that he did not believe this election had proven support for constitutional reforms, and that he hoped the Commission on the Constitution would debate the issue, without regard for party affiliations.

The main opposition party, the Democratic Party, won only 32 seats (45 seats before the election). The only opposition party that performed noticeably well was the Japanese Communist Party, which won 6 seats (up from 2). Independent candidates supported by the unified opposition parties won only 4 seats.

■ Pro-Constitutional Reform Members, Now Over Two-Thirds in Both Houses

All five national dailies ran editorials about the election results on July 11, with the main focus being that the pro-reform forces now had over two-thirds of seats in both the Upper and Lower House. The Asahi and Mainichi, which support keeping the current constitution, and the Nikkei, which takes a neutral position, demonstrated concern over how constitutional reforms might play out. The Asahi called the election “a watershed in the nation's postwar politics,” the Mainichi described it as “a turning point in the history of Japan's postwar politics,” and the Nikkei wrote “Seventy years have passed since the Constitution of Japan became law in November 1946. Postwar politics have reached a major turning point.”

In response to the election results, while the Asahi stated that there is “no doubt that debate on constitutional amendments will gain traction in the Diet,” it also argued “Rewriting the Constitution, of course, is a very complicated political challenge, and these numbers don’t mean the process will move forward immediately.” The reason being that Japanese voters were not supporting constitutional reform with their LDP votes in this election, and that even among the pro-amendment parties of the ruling coalition, the Komeito is being “increasingly cautious” about the prospect. The paper also criticized Abe for avoiding talking about amending the constitution during the election.

The Mainichi also commented that “there is a possibility that the Diet will propose constitutional revisions,” and argued that the Commissions on the Constitution should be convened only on the condition that “a draft Constitution that the LDP drew up in 2012 when it was an opposition party is scrapped.” The reasons for this include the draft excessively glorifying Japan’s traditions, and calling for the Self-Defense Forces to become a full-fledged army. The paper also states that as long as the LDP holds that draft up as its ultimate goal it “will continue to hinder levelheaded discussions on constitutional revisions between the ruling and opposition parties,” and that the “LDP's duty as the governing party to create an environment for calm debate on the Constitution.” The Mainichi also mentions that “Komeito's responsibility of putting the brakes on the LDP as its coalition partner has become even greater than before.”

The Nikkei described the ruling coalition’s victory as being thanks to “avoiding defining any opposing issues,” and in addition to criticizing how constitutional reform was not mentioned leading up to the election, the paper noted “If the Diet’s Commission on the Constitution suddenly starts pinning down specific proposals, there is no question that this would be a problem in light of the democratic process.” Furthermore, regarding the LDP’s constitutional reform draft, the Nikkei argued “The conservative ideals in it are far too strong, and the majority would never accept it. Discussions of how to revise the draft should be held within the party.”

While the Yomiuri stated its approval for the increase in pro-constitutional reform forces, it also mentioned that the debate over constitutional reform would not proceed smoothly, “primarily because these parties are not necessarily in step with each other as to the specific items they believe should be subject to revision.” Since constitutional reform would require winning a majority vote in a referendum even after Diet approval, the paper suggests “it would be realistic to pursue revisions of items on which a broad-based accord is possible, including one from the DP, the largest opposition party.”

The Sankei emphasized the importance of focusing on constitutional reform and improving the security framework, and stated that “With this victory, the prime minister has a responsibility to solve existing issues.”

The unification of the opposition parties received significant media attention, but the five dailies had little good to say of the effort. The Yomiuri described its effect as “limited at best,” and in particular argued that the call to abolish the new security laws as “unconstitutional” did not receive voter support. The paper also stated that criticism of a “union of convenience” with the JCP had a major impact on the opposition’s unified front, and questioned the “tilt to the left” of the DP, the main opposition party: “Shouldn’t the party discontinue such tactics as calling for abolishing the security-related laws and start a more constructive debate with the ruling parties?”

Noting that cooperating in the election with the JCP, which has fundamentally different principles, was the DP’s “greatest mistake,” the Sankei also argued that “If they intend to run the country, they will need to develop realistic policies that can truly oppose the ruling coalition.”

The Asahi described the opposition alliance as “effective, at least to a certain degree,” but noted that “…it has failed to shape up as a powerful national movement that can give a unified voice to public criticism about the Abe administration.” Stating that an opposition alliance is the most effective way to counter the overwhelming ruling party, the paper argued “opposition parties need to figure out an effective formula for their alliance for the next Lower House election, which will enable voters to choose their government.”

The Mainichi also allowed that fielding a joint candidate in all the constituencies with only a single seat contested was “effective to a certain extent,” but also stated that the DP “should take the outcome of the election seriously.” The paper suggested rethinking the strategy of cooperation with the JCP, arguing “The DP and other opposition parties must make efforts to regain the public's confidence in them as political parties with the capability to take over the reins of government.”

The Nikkei noted the difficulties the DP would face in rebuilding, and provided its analysis that “The alliance between the DP and JCP actually benefited the ruling coalition in some respects.”