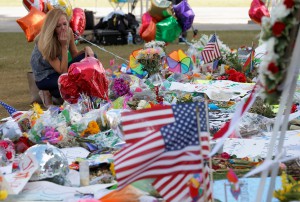 Mainichi: The world is calling for gun control

On June 12 around 2 AM, a man armed with semiautomatic weapons suddenly opened fire on patrons in an Orlando, Florida nightclub, killing 50 people in the worst mass shooting in U.S. history. The perpetrator’s parents were from Afghanistan, he worked as a security guard, and he claimed loyalty to the extremist group ISIS.

The five national dailies all covered this terrible incident in their June 14 editorials, strongly criticizing the global spread of terrorism. They also discussed gun control in the U.S., where there is no end in sight to mass shootings, and the issue of discrimination against minorities.

■ Problems with a Gun Society

One of the factors that led to this shooting is the unique societal situation in the U.S. making it relatively easy to acquire firearms. The Sankei, Mainichi, and Yomiuri all pointed out this issue, and argued for the necessity of gun control.

The Mainichi mentioned the San Bernardino, California shooting in December last year in which 14 people died, and declared “If a change is not made to how easily guns can be acquired in the U.S., it will not be possible to prevent similar incidents.” Pointing out the fact that homegrown terrorists are becoming more common in the U.S., the paper noted “Even though the U.S. is calling for greater international cooperation against terrorism, it refuses to increase controls on guns, which can be used for terrorism within its own borders. The world hopes that the U.S. will recognize this contradiction soon.”

The Yomiuri stated that it was a terrorist act inspired by ISIS, and argued that the current situation where “people can easily obtain weapons normally used by the military” must not be ignored. The daily also stated “With the presidential and congressional elections scheduled for November, measures to fight terrorism, responses to Islamic extremism and concrete gun control steps should be discussed in a level-headed manner.”

The Sankei gave examples of previous deadly shootings in the U.S., and stated that “This country’s society, in which criminals can easily acquire firearms, is abnormal.” The paper also pointed out that the reason it is difficult to move forward with gun control in the U.S. is due to the Second Amendment of the U.S. Constitution guaranteeing the “right to bear arms.” While acknowledging that this amendment is closely connected with the spirit of the founding of the U.S., considering the fact that there are over 30,000 gun-related deaths per year in the U.S. the Sankei declared “If the constitution is no longer relevant to the times, there is no need to hesitate in revising it.”

With the incident still under investigation, and the truth difficult to determine due to the death of the shooter, none of the dailies went beyond general comments on a possible connection with ISIS.

The Asahi, while stating the increasing difficulty of differentiating between terrorism and indiscriminate crimes with unclear motives, pointed out “This is making it even harder for law-enforcement authorities in the West and Japan to deal with the public security threat posed by terrorism.” The paper also criticized Donald Trump, the presumptive Republican candidate for the U.S. presidential election, for calling for a temporary ban on Muslim travel to the U.S., stating “These remarks do nothing but fan racial tension and offer no solution to the problems underlying the attack.”

The Nikkei mentioned that the shooter in this incident was an American citizen, and responded to Trump’s statement with the comment “A travel ban would not have prevented this incident.” The paper further argued “Only a small minority of Muslims are extremists. Inciting religious confrontation will do nothing but cause feelings of alienation from society and further increase the number of potential terrorists seeking retaliation…. Considering the victims were sexual minorities (LGBT), the most important thing is to create a tolerant society accepting diversity in areas such as race, religion, faith, and sexual orientation.”

■ Viewpoints with an Emphasis on Human Rights

The Asahi placed emphasis on the issue in the U.S. of discrimination against minorities. The paper quoted President Obama’s statement that the shooting was “an act of terror and an act of hate.” Pointing out that the shooting took place at a gay bar, and that the shooter had repeatedly indicated his hatred of homosexuals, the paper emphasized “the perpetrator showed many signs of harboring discriminatory hatred toward social minorities.” Stating that “The protection of the rights and safety of minorities is a principle that civilized society has established through many years of fighting against prejudices,” the paper declared the shooting an unpardonable act trampling on these efforts.

In a different light, the Mainichi pointed out issues existing within Muslim society: “Although Islam is critical of homosexuality, it is unacceptable to kill people no matter the reason…. If Islamic authority figures do not continually emphasize this, then this major religion with 1.6 billion believers will continue to be misunderstood in the West.”

*English translations of The Yomiuri, The Asahi are from The Japan News and The Asia & Japan Watch, respectively.  Those for The Mainichi, The Nikkei and The Sankei are provisional. The content of this page was made by the Foreign Press Center Japan and does not reflect the opinion of the Japanese Government or any other organization.